Ethiopia’s deadly conflict with its northern Tigray region spilled over the border Tuesday as several thousand people fled into Sudan, along with soldiers seeking protection, while the Tigray regional leader accused Eritrea of attacking at the request of Ethiopia’s federal government.

Ethiopia’s Nobel Peace Prize-winning Prime Minister Abiy Ahmed rejected international pleas for dialogue with the Tigray regional leaders, saying there would be no negotiations until the “law enforcement operation” is over. He seeks to arrest the heads of a regional government his administration regards as illegal while destroying its well-stocked arsenal.

Even as Britain and the African Union urged an immediate de-escalation, Mr. Abiy vowed the military would bring a speedy end to the fighting. But experts warned the conflict could drag on and destabilize one of Africa’s most powerful countries.

The flow of refugees is the first visible sign of a growing humanitarian crisis affecting millions of people at the heart of the Horn of Africa. Tigray remains almost completely cut off from the world nearly a week after communications were severed and Abiy announced a military offensive in response to an alleged attack on a military base.

The United Nations and partners in Sudan are preparing for 20,000 refugees, at least initially.

Hundreds of people have been reported killed on both sides of the conflict so far, one diplomat in the capital, Addis Ababa, said. It remained difficult to confirm either side’s claims. Each blames the other for sparking the conflict.

The British foreign secretary, Dominic Raab, joined the pressure on Abiy, saying he spoke with the prime minister and urged a de-escalation of the conflict: “Civilians and humanitarian access must be protected.” The AU Commission chair, Moussa Faki Mahamat, called for an immediate cease-fire and stood ready to support an “inter-Ethiopian effort in the pursuit of peace.”

At least 3,500 refugees, including women and children, had arrived in Sudan’s Kassala province, the head of the refugee agency there, Al-Sir Khalid, told The Associated Press. Others were on the way, he said.

By late Tuesday, the number of fleeing Ethiopians to Sudan’s border province of Kassala and al-Qadarif surged past 6,000, the state-run SUNA news agency reported. The agency, citing unidentified officials, said that over 200,000 Ethiopians were expected to cross into Sudan in the coming days.

At least 30 armed Ethiopian troops joined the refugees fleeing into Sudan, SUNA reported. A Sudanese military official said they turned themselves in and asked for protection as fighting raged over the border. The official spoke on condition of anonymity because he was not authorized to brief reporters.

Sudan, which has sent more than 6,000 troops to the border, is under pressure from the international community to help make peace.

Eritrea, long at bitter odds with the Tigray regional government, the Tigray People’s Liberation Front, is more challenging. Tigray leader Debretsion Gebremichael, in televised remarks, alleged that Eritrea “started taking military action since yesterday” and fired heavy weaponry at Humera, near the border with Eritrea and Sudan, “so that our people would panic.”

“Therefore, the war has now progressed to a different stage,” he said. Eritrean officials did not respond to requests for comment.

The TPLF once dominated Ethiopia’s ruling coalition. Feeling marginalized by Abiy’s political reforms after he took office in 2018, it broke away last year and then angered the federal government by holding a local election in September while national elections are delayed until next year.

Diplomats and others assert that the conflict in Tigray could destabilize the region and other parts of Ethiopia, Africa’s second-most populous country with 110 million people. Ethiopia has scores of ethnic groups and other regions that have sought more autonomy, and some experts worry about further fracturing of a country already plagued by deadly ethnic violence.

Several hundred people reportedly have been killed on both the Ethiopian government side and the Tigray regional government side, a diplomat in the capital told the AP, speaking on condition of anonymity.

“There are so many uncertainties,” the diplomat said. “How far can Abiy go with this operation while keeping the possibility of, in the end, having a more or less peaceful solution? You need the support of the people.”

Aid groups warn humanitarian needs will grow alarmingly as the conflict drags on.

“It’s a very serious situation,” Sajjad Mohammad Sajid, the U.N humanitarian chief for Ethiopia, told The Associated Press. “It looks like, unfortunately, this may not be something which can be resolved by any party in a week or two. It looks like it’s going to be a protracted conflict, which is a huge concern from the point of view of protection of civilians.”

More than 1,000 people of different nationalities are stuck in Tigray, he added.

Sajid worried about the supply chain of food, fuel and COVID-19 medical supplies.

“We have trucks loaded with the food and medicines stuck on the way which need to go feed people and treat people in Tigray,” he said. Even banks are not operational in the region now, affecting humanitarian cash transfers to 1 million people.

George Readings, who leads global crisis analysis for the International Rescue Committee, said his colleagues in Tigray have just one month left of fuel to run water pumps for 90,000 refugees. Without it, “there just won’t be clean water to drink, wash hands, deal with COVID,” he said.

The group also feeds undernourished children, and “we don’t know if, or when, or how we’ll be able to resupply.”

Opinion
Ethiopia is on the brink of a potentially destabilizing war. Will Canada prove to be a true friend?
November 11, 2020 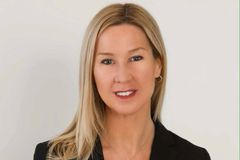 Hundreds killed and 15 million at risk across borders in growing Ethiopian war
November 9, 2020 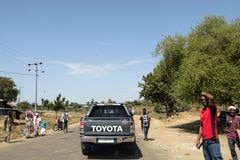 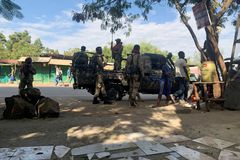