Ethiopia approached civil war on Wednesday as its Nobel Peace Prize-winning prime minister ordered the military to confront the country’s well-armed Tigray regional government, accusing it of a deadly attack on a military base and declaring “the last red line has been crossed” after months of alleged provocations.

Prime Minister Abiy Ahmed’s move against the Tigray People’s Liberation Front, in one of Africa’s most populous and powerful countries, sent a shock wave through the long-turbulent Horn of Africa region. Ethiopia’s neighbours include Somalia and Sudan, and the prospect of spreading instability sent a chill down observers' spines.

Signalling the gravity of the threat, the United States in the midst of its election drama issued a statement urging “an immediate de-escalation.” The United Nations expressed “alarm” and made a similar plea.

“We have to guard against `just another tribal African war,”' former U.S. diplomat Payton Knopf told The Associated Press. “This is much more akin to what an inter-state war would look like,” with large and highly trained ground forces, mechanized units and heavy artillery. “This is not Syria, right? This is not Yemen. This is a different order of magnitude.” He compared Ethiopia to the former Yugoslavia.

Internet and phone lines were cut in Tigray, challenging efforts to verify the Ethiopian government’s account of events. A statement on Tigray TV accused the federal government of deploying troops to “cow the people of Tigray into submission by force” and said airspace over the region was closed.

The prime minister announced “several martyrs” in the overnight attack in Mekele, the northern Tigray region’s capital, and Dansha town. The region is Ethiopia’s most sensitive, neighbouring Eritrea, which fought a long border war before the two countries made peace in 2018.

Abiy in a national address late Wednesday said the attack was aimed at making Ethiopia vulnerable to outside enemies, without naming names. The army late Wednesday said it had launched a counterattack and asserted “massive” damage, and Abiy said the military will conduct further operations in the coming days.

Ethiopia declared a six-month state of emergency in Tigray on Wednesday, saying “illegal and violent activities” were threatening the country’s sovereignty. A Tigray TV report that the Ethiopian military’s northern command had defected to the Tigray government was “not true,” the prime minister’s office told the AP.

The TPLF dominated Ethiopia’s military and governing coalition before Abiy took office in 2018 and announced sweeping political reforms that won him the Nobel last year. Those reforms, however, opened space for ethnic and other grievances. The TPLF, feeling marginalized by shifts in power, left the coalition last year.

Tigray officials have objected to the postponement of Ethiopia’s national election because of the COVID-19 pandemic, which extends Abiy’s stay in office. In September the region held an election that defied the federal government and increased tensions over a region of some 5 million people that, despite its small share of Ethiopia’s population of 110 million, has had outsize influence.

Last month, the federal government further angered the TPLF by moving to divert funding for Tigray to local administrations instead of the regional government.

On Monday, Tigray leader Debretsion Gebremichael warned a bloody conflict could erupt, accusing Ethiopian and Eritrean leaders of making “all necessary preparations to start war” against the region. There was no immediate Eritrea comment.

Ethiopia was already stressed by a dispute with Egypt over a massive Ethiopian dam project that has drawn rare attention by President Donald Trump to Africa, and by a multi-layer crisis with the COVID-19 pandemic and deadly ethnic violence.

Now the greatest test of Abiy’s rule has come, as the fighting in Tigray could inspire other restive regions in Ethiopia.

“This war is the worst possible outcome of the tensions that have been brewing,” said William Davison, International Crisis Group’s senior analyst for Ethiopia. “Given Tigray’s relatively strong security position, the conflict may well be protracted and disastrous.”

Abiy’s statement alleging the overnight attack accused the TPLF of arming and organizing irregular militias in recent weeks. “TPLF has chosen to wage war,” his office said. “The last red line has been crossed with this morning’s attacks and the federal government is therefore forced into a military confrontation” to save the country.

The head of Ethiopia’s new state of emergency committee, Redwan Hussein, told reporters the federal government’s conflict is with a “small clique of TPLF circles that are keen to destabilize Ethiopia,” and the government must do everything possible to “liberate the Tigrayan people.”

The TPLF has said it’s not interested in negotiating with the federal government. “What we need now is a national dialogue,” a senior TPLF official, Getachew Reda, told the AP on Sunday.

Observers have worried for months about the growing tensions and their implications for the Horn of Africa, where Abiy has cast himself as a peacemaker.

A report last month by the United States Institute of Peace said the fragmentation of Ethiopia “would be the largest state collapse in modern history, likely leading to mass inter-ethnic and interreligious conflict … and a humanitarian and security crisis at the crossroads of Africa and the Middle East on a scale that would overshadow the existing conflicts in South Sudan, Sudan, Somalia, and Yemen.”

The international community needs to rally around the idea of national dialogue in Ethiopia, the International Crisis Group wrote last week. “The alternative, given the country’s multiple and bitter divides, is a potential march to war that would be catastrophic,” it said.

Fighting could undo Ethiopia’s military cohesion, the group warned: “Tigray officers hold positions throughout the armed forces in different parts of the country; some might prove more loyal to their region than to federal authorities.”

It was not immediately clear how Ethiopia’s regions would respond.

The head of the Amhara region, Temesgen Tiruneh, in a Facebook post said members of Tigray’s security forces were welcome to defect, writing that “we know you are fighting because you’ve no choice.” The Amhara and Tigray regions before Abiy’s rule were locked in a bitter confrontation over disputed border areas. 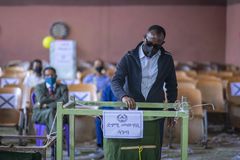