Ethiopia’s prime minister has promised “immediate access” for humanitarian groups to Tigray, the United Nations said on Friday, after the United States and the European Union compared the Ethiopian government’s current treatment of the embattled region to a “siege.”

The humanitarian situation in Tigray, which faces the world’s worst famine crisis in a decade, is “extremely concerning,” the UN said after Secretary-General Antonio Guterres and Ethiopian Prime Minister Abiy Ahmed spoke Thursday by phone. Abiy also said basic services to Tigray including electricity and communications “will resume swiftly,” the UN said.

But Ethiopia’s government on Friday said all flights carrying aid to Tigray region must go through its capital for inspection to ensure they carry only humanitarian items. The UN says such flights have not resumed since commercial flights were halted on June 23, though the government this week said they would be allowed.

Aid to Tigray has been blocked, though access within the region is improving, the UN humanitarian agency said, as some 5.2 million people need help and hundreds of thousands face famine conditions. Aid hasn’t reached many since fighting began in November, despite the government’s earlier assurances that help was being delivered.

Ethiopia’s government last month declared a unilateral cease-fire in Tigray as its soldiers retreated ahead of resurgent Tigray fighters loyal to the region’s elected government, which Ethiopia now calls a terrorist group. The war, now in its ninth month, followed months of political tensions and Abiy’s accusation that Tigray forces had attacked a military base.

The war has threatened to destabilize Africa’s second most populous country, an anchor in the strategic Horn of Africa region. Thousands of civilians have been killed, and the conflict threatens to draw in neighbouring Sudan as Tigray forces fight their way in that direction in the hope of finding an opening to the outside world.

The fighting is moving into western Tigray, where forces from Ethiopia’s neighbouring Amhara region had earlier taken control of many communities and expelled ethnic Tigrayans. This new phase in the conflict could be “really, really much more dangerous than what we’ve seen so far,” Tsedale Lemma, the founder of the independent Addis Standard magazine, told an online event Thursday night. Amhara authorities have said western Tigray is historically theirs.

Caught in the middle are millions of Tigrayans.

People have begun to starve to death, The Associated Press has reported. And witnesses have described Ethiopian forces, backed by those from neighbouring Eritrea to the north, burning and looting crops and other food supplies in what the U.S. has called an “entirely man-made” famine crisis.

In late June, Amhara special forces blocked a 29-truck convoy with World Food Program aid from entering Tigray, the UN update said. Two bridges that are crucial to delivering aid to the region were destroyed on July 1. Electricity and telecommunications in the region remain cut.

“Humanitarian supplies within the region are quickly depleting, including a severe shortage of fuel,” the UN said, adding that over 1.8 million people “could slide into starvation.”

Ethiopia’s foreign ministry on Friday accused the UN humanitarian agency of making biased statements that “seem to be framed to encourage” the Tigray forces and mislead the international community. The UN agency didn’t immediately respond to a request for comment.

The Tigray forces have dismissed the unilateral cease-fire as a “sick joke” and insist that a key condition for a halt to the fighting would be “the operation of international flights directly from airports in Tigray without any preconditions.”

The tensions, along with unsubstantiated allegations circulating on social media that humanitarian flights could carry arms to the Tigray forces, have increased the risks for aid workers in the region. This week, the medical charity Doctors Without Borders announced it was suspending its services in the key towns of Abi Adi, Adigrat and Axum after three staffers were murdered.

No one has claimed responsibility for the killings, the aid group said, adding that aid organizations “have been repeatedly undermined by public statements casting unwarranted suspicion on their activities, thereby jeopardizing the safety of their staff on the ground.” 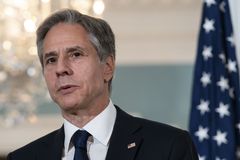 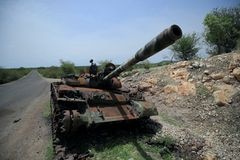 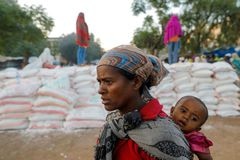