European Union member states agreed at a summit on Friday to take additional punitive measures against Russia for a nerve agent attack in Britain, as Moscow accused the bloc of joining a London-driven hate campaign against it.

Moscow has denied that it is behind the attack on former Russian spy Sergei Skripal and his daughter, the first known offensive use of a nerve toxin in Europe since World War Two.

But German Chancellor Angela Merkel said evidence of Russian culpability presented by British Prime Minister Theresa May was “very solidly based” and promised new measures after EU leaders agreed late on Thursday to recall their ambassador to Moscow.

“Germany and France agree that additional steps, on top of the recall of the ambassador, are necessary,” Merkel said at a joint news conference with French President Emmanuel Macron.

Macron called the attack “unprecedented” and said Europe must respond: “It is an aggression against the security and sovereignty of an ally that is today a member of the European Union. It demands a reaction. This is clear.”

In a boost for May, the 28-member EU collectively condemned the attack and declared in a Brussels summit statement that it was “highly likely” Moscow was responsible.

A British judge said on Thursday that both victims may have suffered brain damage from the attack. A policeman who was hospitalized after discovering the two unconscious on a park bench has now been discharged.

The leaders of Poland, the Czech Republic and the three Baltic states - Latvia, Estonia and Lithuania - were among those predicting further expulsions of Russian diplomats from their capitals.

“I expect very rapid tensions in the coming weeks because many countries will start to recall their ambassadors too. The current times are harder than the Cold War,” Borissov said, making clear his discomfort with further measures.

Moscow has retaliated against Britain’s move to expel 23 Russians by ordering out the same number of Britons.

On Friday, the Russian foreign ministry described the EU allegation as “baseless” and accused the bloc of spurning cooperation with Moscow and joining “another anti-Russian campaign deployed by London and its allies overseas.”

The expulsion of British diplomats went ahead on Friday, with a convoy of minibuses speeding out of the embassy compound to applause after British embassy staff said their goodbyes in the courtyard under a light snowfall.

“I welcomed 48 colleagues/families plus 4 dogs. Safe at home,” Foreign Office official Simon McDonald said on Twitter after the diplomats arrived back at a British air force base later on Friday.

France’s Foreign Minister Jean-Yves Le Drian, on a visit to Kiev, signaled that Paris was considering expelling Russian diplomats in solidarity with Britain. “You will see,” he said.

The summit statement hardened previous EU language on Russia’s alleged role as Macron and others helped May to overcome hesitation on the part of some states that feel friendlier to Moscow. Some of them had questioned how definitive Britain’s evidence is.

Welcoming the solidarity she secured from the summit, May told reporters on leaving: “The threat from Russia is one that respects no borders and I think it is clear that Russia is challenging the values we share as Europeans and it is right that we stand together in defense of those values.”

EU leaders back Britain in blaming Russia over poisoning of ex-spy
March 22, 2018 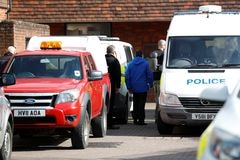 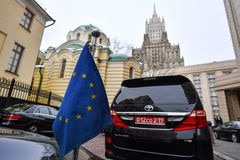 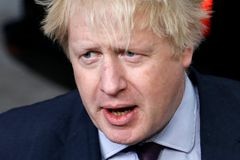