Alexey Navalny was evacuated from Russia in a coma five months ago, amid fears that he would never recover from his poisoning. On Saturday, tens of thousands of his supporters took to the streets, revealing the scale of his continuing challenge to Russian President Vladimir Putin.

The Kremlin has long had an unofficial policy of never publicly acknowledging Mr. Navalny. But after the protests in Moscow, St. Petersburg and dozens of smaller cities, the opposition leader’s name was suddenly on the lips of state-media newsreaders – most prominently on Sunday night’s flagship News of the Week program. On the show, he was slammed by anchor Dmitry Kiselyov as “a politician on the level of a toilet brush” and “a phony,” among other charges.

Mr. Kiselyov, a close ally of Mr. Putin, also claimed that Mr. Navalny had been sent on a “mission” by Germany – where Mr. Navalny recuperated for five months after his August poisoning with a Novichok-class nerve agent – to destabilize Russia.

The Kremlin separately lashed out at the U.S. embassy in Moscow, accusing it of interference in Russia’s domestic affairs by publishing a map that gave the date and time of Saturday’s opposition protest, advising American citizens to avoid the area. Publicizing such “sensitive information,” Russia’s Foreign Ministry said in a statement, was “in line with Washington’s provocative policy of encouraging protests in countries whose governments are seen by [the] U.S. as undesirable.”

The accusations that Mr. Navalny is backed by Western governments – a claim Mr. Navalny’s supporters dismiss as propaganda – comes just days after Mr. Biden was sworn into office, and two weeks before the expiry of a key nuclear arms-control deal.

U.S. President Joe Biden’s administration appears to be trying to keep the issue of Mr. Navalny’s treatment separate from the nuclear negotiations. On Thursday, the White House said it would seek a five-year extension of the nuclear pact, known as New START, which caps the number of strategic warheads each side can deploy at 1,550. The move has been welcomed by the Kremlin.

But Mr. Biden’s team has also signalled that it will be much more critical of Mr. Putin’s authoritarianism than former president Donald Trump’s officials had been. A Saturday statement from the State Department condemned the “use of harsh tactics against protesters and journalists this weekend in cities throughout Russia” and called for “the immediate and unconditional release” of Mr. Navalny.

The calls for Mr. Navalny’s freedom will almost certainly go unanswered. The 44-year-old anti-corruption activist has upended Russia’s political scene with his Jan. 17 return to the country – and his accusation that Mr. Putin personally ordered the attempt on his life.

Mr. Navalny was immediately jailed upon his return. He responded by calling on his supporters to protest – and by releasing a video alleging that Mr. Putin is the beneficial owner of a US$1.35-billion palace on the Black Sea, a video that has now been viewed at least 80 million times on YouTube.

On Saturday, more than 100,000 people were estimated to have taken part in demonstrations in more than 100 cities and towns around Russia. In Moscow and St. Petersburg, where tens of thousands marched through the streets shouting “Putin is a thief!” and “Free Navalny!” the anger occasionally boiled over into clashes between bare-knuckled protesters and baton-wielding riot police.

More than 3,000 people were arrested, and Mr. Navalny’s allies have called for more protests next weekend. Mr. Navalny is next scheduled to appear in court on Feb. 15, on charges of violating the terms of a suspended sentence he was given after a 2014 conviction for financial crimes.

That conviction was widely viewed as trumped-up punishment for Mr. Navalny’s political activities, but it could now be used to jail him for up to 3½ years. Prosecutors are believed to be considering additional charges that could see the lawyer-turned-opposition leader kept behind bars for a decade or longer.

Until this week, Mr. Putin and his allies had refused to utter Mr. Navalny’s name, usually referring to him as “that blogger” or – while he was recuperating in Germany from the Novichok attack – as “the Berlin patient.”

But amid Saturday’s protests, Russia’s state media began focusing blame directly on Mr. Navalny, with the state-run Rossiya 24 channel reporting that “schoolchildren” were being lured “to attend rallies in support of twice-convicted blogger Navalny.” The country’s main Channel One, meanwhile, told viewers that “a rally in support of Alexey Navalny is not authorized by the authorities, which means it is illegal.”

Neither state-media channel showed a picture of Mr. Navalny during its report, or mentioned his poisoning. An investigation by the Bellingcat website found that a team of agents – including poison and chemical weapons specialists – from Russia’s FSB intelligence service had shadowed Mr. Navalny for three years before the attempt on his life.

Mr. Navalny is being held at Moscow’s notorious Matrosskaya Tishina prison, where numerous prisoners have died under suspicious circumstances – including lawyer Sergei Magnitsky, who became an international cause célèbre after he was beaten to death inside the prison in 2009. The official version is that Mr. Magnitsky died of a heart attack.

Just before Friday’s protests, Mr. Navalny released a statement via his lawyer in which he asked his supporters not to believe it if any similar accidents were to befall him in prison.

“Just in case, I am announcing that I don’t plan to either hang myself on a window grill or cut my veins or throat open with a sharpened spoon,” Mr. Navalny said in the statement, which was posted to his Instagram account.

“I use the staircase very carefully. My blood pressure is taken every day – it’s like a cosmonaut’s, so a sudden heart attack is excluded.” 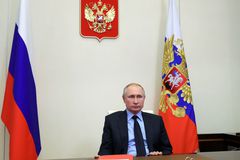 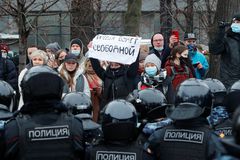 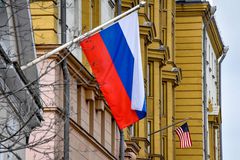