In one of the wealthiest and most stable places in Europe, voters decided on Sunday to abandon mainstream politics in droves.

Bavaria, the southern German state, has an unemployment rate of 2.8 per cent, the lowest crime rate in decades, big budget surpluses at every level of government. Yet voters angrily expressed a feeling, increasingly widespread in Germany, that Chancellor Angela Merkel is losing her grip on her country’s political imagination.

The Bavarian election was widely seen as a referendum on Ms. Merkel’s leadership and policies, especially around immigration. Yet the results, which showed former Merkel voters fleeing to the once-minor Green Party more than to the extreme-right Alternative for Germany (AfD), also showed that attempts by her party and ministers to win back voters by moving to the anti-immigration right are equally unpopular.

The two big mainstream parties that have dominated German politics since the Second World War can’t seem to win, regardless of which political direction they move. Both plummeted in support – reflecting a Europe-wide voter retreat from big parties of the left and right. The conservative Christian Social Union (CSU), a branch of Ms. Merkel’s governing federal Christian Democratic Union (CDU), fell to 37 per cent from 48 per cent of the vote, meaning it will need to negotiate a complex coalition with other parties. The traditional opposition, the centre-left Social Democratic Party (SPD), saw its support cut in half to 9.6 per cent, making it the fourth-place party as voters fled to once-smaller parties.

The most successful of those parties was the Greens, which attracted 18 per cent of votes, more than double their previous standing – and gained most of those votes from conservatives. The AfD, which opposes all immigration and is widely seen as a party of racial intolerance, won 10.6 per cent – far short of the explosion of support it had predicted, but still an astonishing outcome in a state with full employment.

This was a double rejection of Ms. Merkel’s party and its ministers. On one hand, some Bavarians say they are still infuriated by her decision in 2015 not to send the military to force back hundreds of thousands of migrants flocking to Bavaria’s southern border. That migrant crisis ended up drawing a million newcomers into Germany in 2015 and 2016, almost half of whom are staying as refugees.

On the other hand, voters seem equally eager to punish Ms. Merkel’s Bavarian interior minister, Horst Seehofer, for having taken his politics far in the opposite direction from hers. Mr. Seehofer, the leader of Bavaria’s CSU, rebelled publicly against Ms. Merkel’s immigration policies this summer, attacking the Chancellor’s “welcome culture” and taking the CSU far to the right on matters of immigration and culture − going so far as to order Christian crosses placed on the entrances to all public buildings in Bavaria.

That proved to be a disastrous miscalculation, as Mr. Seehofer’s embrace of xenophobic politics appears to have driven hundreds of thousands of CSU voters to the Green Party – which, despite its ecological focus, campaigned on a conservative-friendly platform devoted to fiscal responsibility and controlled immigration. In fact, the CSU lost more voters to the Greens (200,000) than it lost to the AfD (180,000), according to an analysis by public broadcaster ARD.

“The CSU strategy of fishing for right-wing voters backfired as it lost most of its voters to the Green Party,” political scientist Arne Jungjohann said in an interview. “The Greens achieved a historic performance in Bavaria, because they attracted almost as many votes from CSU (200,000) as from SPD (210,000).”

The upshot is that the powerful political force of Merkelism − a pragmatic conservatism that has kept Ms. Merkel securely in power for 14 years, by attempting to please voters left and right with generally safe and low-risk policy moves − now appears to be in jeopardy. Voters are abandoning this sort of centrist brokerage politics for more clearly defined options on the left and the right − a familiar pattern in other countries, but a dramatic change in Germany, where voters have previously stayed cautious.

Ms. Merkel’s CDU colleagues talk openly of replacing her. She likely will not quit, or be replaced at the coming party convention in December (although she faces several challengers), they say. However, those around her feel she has become disconnected from German voters and would like to see her replaced before the next election.

That is the sentiment you hear within a governing party when the country is in crisis. In a country at the peak of its prosperity and security, this sort of rebellion is considerably more surprising. 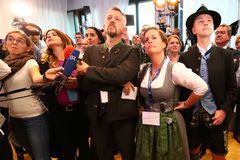 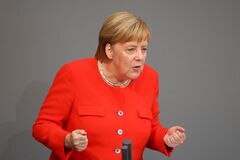 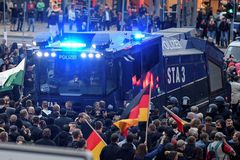