Rami Ayyub
JERUSALEM
Reuters
Published May 12, 2021 Updated May 12, 2021
Comments
Text Size
Please log in to listen to this story. Also available in French and Mandarin. Log In Create Free Account

Weeks of violent clashes in East Jerusalem have ignited the heaviest fighting in years between Israel and Palestinian militants in the Gaza Strip.

At the core of the violence that has left dozens dead are tensions between Israelis and Palestinians over Jerusalem, which contains sites sacred to Judaism, Islam and Christianity.

As both sides appear to be digging in for more prolonged fighting, here are some of the factors that triggered the escalation.

Since the beginning of the Muslim holy month of Ramadan in mid-April, Palestinians have faced off nightly with Israeli police in East Jerusalem, who put up barriers to stop evening gatherings at the walled Old City’s Damascus Gate.

Palestinians saw the barriers as a restriction on their freedom to assemble. Police said they were there to maintain order.

Tensions have also been high over a long-running legal case that could see multiple Palestinian families evicted from their homes to make way for Israeli settlers who, backed by an Israeli court ruling, want to move in.

The violence quickly spread to the Old City compound containing Al-Aqsa Mosque, the third holiest shrine in Islam and the most sensitive site in the Israeli-Palestinian conflict. Hundreds of Palestinians have been injured in fighting with police in the compound and around the Old City in recent days.

Gaza’s Islamist rulers Hamas and other militant groups in the enclave repeatedly warned Israel that the fighting in Jerusalem was a “red line”, and vowed to fire rockets if Israeli police did not stop their raids on the Aqsa compound.

As Israel commemorated its capture of East Jerusalem in a 1967 war with a march on Monday, Hamas and the Islamic Jihad militant group fired rocket barrages towards Jerusalem and its surrounding suburbs.

Israel had “ignited fire in Jerusalem and Al-Aqsa and the flames extended to Gaza, therefore, it is responsible for the consequences”, Hamas leader Ismail Haniyeh said.

Within hours, Israeli warplanes began bombing militant targets in Gaza, with the military saying that civilian casualties “cannot be ruled out” in the densely populated coastal territory.

The fighting has since escalated dramatically with militants firing hundreds of rockets towards Tel Aviv and Israel carrying out hundreds of air strikes in Gaza.

Violence has also broken out in mixed Arab-Jewish cities across Israel, with members of Israel’s 21 per cent Arab minority angry over the Jerusalem evictions and Gaza violence.

The most intensive aerial exchanges between Israel and Hamas since a 2014 war in Gaza have prompted international concern that the situation could spiral out of control.

But Hamas also appeared to see the escalation as an opportunity to marginalize Palestinian President Mahmoud Abbas and present itself as the guardian of Palestinians in Jerusalem.

Hamas has amassed some 7,000 rockets, as well as 300 anti-tank and 100 anti-aircraft missiles, since the 2014 war, an Israeli military commander said during a briefing in February. Islamic Jihad has amassed 6,000 rockets, the commander said. The groups have neither confirmed nor denied the Israeli estimates.

Some Israeli commentators said Hamas could also see the timing as opportune with Israel in political flux as Prime Minister Benjamin Netanyahu’s opponents try to form a government that would unseat him after an inconclusive March 23 election.

Other commentators have said that Netanyahu appeared to be distracted by his trial on corruption charges he denies, allowing tensions to surge in Jerusalem and spill over into Gaza.

Gaza has for years had limited access to the outside world because of a blockade led by Israel and supported by Egypt, who both cite security concerns over Hamas for the restrictions.

JERUSALEM AT CORE OF CONFLICT

Politics, history and religion all place Jerusalem at the centre of the broader Israeli-Palestinian conflict.

At the heart of Jerusalem’s Old City is the hill known to Jews across the world as Temple Mount – the holiest site in Judaism – and to Muslims internationally as The Noble Sanctuary. It was home to the Jewish temples of antiquity. Two Muslim holy places now stand there, the Dome of the Rock and Al-Aqsa Mosque.

Christians also revere the city as the place where they believe that Jesus preached, died and was resurrected.

Israel sees all of Jerusalem as its eternal and indivisible capital, while the Palestinians want the eastern section as a capital of a future state. Israel’s annexation of East Jerusalem is unrecognized internationally. 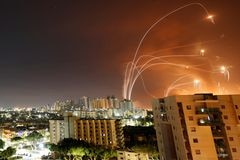 Israel, Hamas escalate heavy fighting with no end in sight
Subscriber content
May 11, 2021 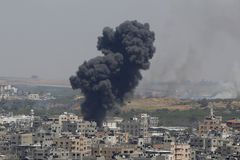 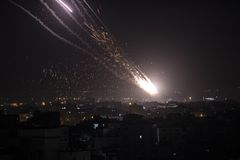