Facebook Inc. unveiled new measures Monday to prevent the spread of political misinformation online, even as chief executive Mark Zuckerberg doubled down on his defence of free speech just days before he is set to testify before Congress.

The social-media giant said it would launch a new program to protect political campaigns against hackers; ban ads that promote voter suppression; include more prominent warnings on posts flagged as misleading by third-party fact-checkers; and label content published by state-controlled media outlets.

The new measures coincide with the revelation that Facebook shut down four networks of fake accounts and pages linked to Russia and Iran with posts targeting users in the United States, North Africa and Latin America. The campaign included posts on politically sensitive topics, such as one in Spanish featuring Democratic Congresswoman Alexandria Ocasio-Cortez accusing U.S. President Donald Trump of racism.

In a call with reporters on Monday, Mr. Zuckerberg acknowledged that state-run disinformation campaigns have become more sophisticated since the 2016 U.S. elections, but he argued that Facebook is better prepared to deal with those threats today. “Elections have changed significantly since 2016, but Facebook has changed too,” he said.

In Canada, Facebook has said it complied with new election campaign rules ahead of the federal election, including verifying the location of political advertisers and publishing an archive of political ads.

But the company has been criticized for changes to its platform that make it more difficult for tools such as The Globe and Mail’s ad-transparency project to collect information on political ads. Facebook said Monday that it would add new tools to make it easier for third-party researchers to analyze political ads.

In the U.S., Mr. Zuckerberg is facing renewed criticism from Democratic lawmakers for Facebook’s announcement last month that it would not subject ads by political candidates to fact-checking, a decision critics have said has allowed Mr. Trump to mount a well-financed social-media campaign to spread unfounded accusations about former vice-president and Democratic presidential candidate Joe Biden.

Nathaniel Gleicher, Facebook’s head of cybersecurity policy, said the company is increasingly seeing misinformation campaigns spread by domestic, rather than foreign, actors. But he said Facebook is focused on taking down posts that involve suspicious behaviour, such as networks of fake accounts spreading similar messages, rather than policing the content of the messages they spread.

“It’s actors that are concealing their identity, that are using fake accounts, that are using other techniques to make their content appear more popular than it is,” he said. “And here we’re taking action not on the content itself, but on the behaviour.”

Mr. Zuckerberg defended the decision to allow political campaigns to run misleading ads, arguing it is necessary to protect free speech. “I just think that we have to not lose sight of the fact that it’s also important to protect people’s voice and free expression,” he said. “These are competing values at times, and if you only ever focus on the downside or the risk of certain things, then you’re naturally, over time, going to restrict things maybe more than would be ideal.”

The Facebook co-founder has been on a charm offensive in recent weeks ahead of a scheduled appearance before a House of Representatives financial committee Wednesday. In recent days, Mr. Zuckerberg has met with U.S. lawmakers, sat for interviews with Fox News and MSNBC and issued a lengthy defence of free speech in a talk at Georgetown University.

In April, 2018, he was grilled over two days on Capitol Hill over Facebook’s data-privacy practices in the wake of the scandal involving British political consulting firm Cambridge Analytica.

Wednesday’s congressional hearing will focus on Facebook’s efforts to develop a bitcoin-like cryptocurrency and global payments system. The project, known as Libra, has faced an intense backlash from global financial regulators and an exodus of high-profile business partners, in large part because of Facebook’s controversies involving data privacy and election interference. 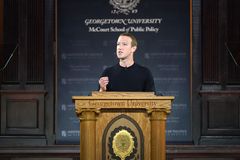 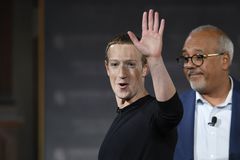