Families of more than 300 kidnapped Nigerian schoolboys worried they may be brainwashed or held for years as security forces combed a vast forest on Wednesday for armed captors possibly from the jihadist Boko Haram movement.

According to an unverified audio clip, the Islamist group – whose name means “Western education is forbidden” – was responsible for last week’s raid on an all-boys school in the town of Kankara in northwestern Katsina state.

Parents fear time may be running out: Boko Haram has a history of turning captives into jihadist fighters.

“They will radicalize our children if the government does not act fast to help us rescue them,” Trader Shuaibu Kankara said, crying as he spoke from home.

His 13-year-old son Annas was among those abducted from the Government Science school on Friday night.

Two other sons managed to escape, he added, when men on motorbikes with AK-47 assault rifles stormed the school and marched the boys into a forest.

Though the military said it had them roughly located, some experts feared the boys could be taken over the porous border with Niger, about an hour’s drive north, or at least split into small groups to make finding them harder.

Boko Haram and its offshoot, Islamic State West Africa Province, have waged a decade-long insurgency estimated to have displaced about two million people and killed more than 30,000. They want to create states based on their extreme interpretation of sharia (Islamic law).

If Boko Haram carried out the kidnapping in an area where it had not previously claimed attacks, that would mark an alarming expansion beyond its northeastern base, security experts say. But it may alternatively have purchased the boys from criminal gangs in the northwest with whom it has been building ties.

Nigerian soldiers and intelligence officers were combing the Rugu forest on Friday in search of the roughly 320 missing schoolboys, Abdu Labaran, an aide to Katsina’s state governor, told Reuters. Planes have also been deployed.

One of the largest forests in Nigeria, Rugu straddles three states and includes woodland near the school. Mr. Labaran said earlier in the week that a “bandit” had called a parent demanding a ransom and an end to helicopter flyovers.

The mass abduction echoes Boko Haram’s 2014 kidnapping of more than 270 girls from a school in the northeastern town of Chibok. The attack stunned Nigerians and gave rise to a global #BringBackOurGirls campaign.

Six years on, only about half the schoolgirls have been found or freed. Others were married off to fighters, while some are assumed to be dead.

“We pray it’s not going to be another situation of the Chibok girls’ abduction,” said Ahmed Bakori, a farmer whose 14-year-old son Abubakar was among those taken.

About two dozen parents came to the Government Science compound on Wednesday and prayed in the school mosque. The compound, comprised of white single-storey buildings built on dusty red soil, was quiet.

Abubakar Lawal, who has two children among the captives, said he did not believe Boko Haram’s claim and would wait with patience and prayers. “The government has to do diplomacy in a way to rescue these people,” he said outside the school building.

The attack is awkward for President Muhammadu Buhari, who comes from Katsina and arrived on a private visit hours before the kidnapping occurred. Mr. Buhari has repeatedly said that Boko Haram has been “technically defeated.”

A retired general and former military ruler, Mr. Buhari was elected to office in 2015 in large part due to his pledge to crush the insurgency. Under his predecessor, Goodluck Jonathan, Boko Haram grew in strength and controlled a large tract of territory in northeast Nigeria around the size of Belgium.

Around the nation, anger and anxiety were building over the abductions, with #BringBackOurBoys trending on Twitter.

Armed forces spokesman John Enenche said on Wednesday that troops were determined to rescue the boys alive and had no evidence any were dead.

He gave new details of the school attack and subsequent firefight with guards. Soldiers arrived but could only shoot in the air as the assailants used the boys as shields.

“It is the characteristics of terrorists,” he said. 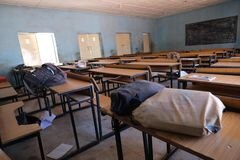