Getting into the private Santo Volto medical clinic on the ancient Aventine Hill in Rome requires patience – more than a few minutes of it.

The front doors are locked. Clients have to wait outside, wearing masks, while they fill out a rather detailed form that asks if they have any symptoms of COVID-19, been near anyone who has the disease, travelled overseas and other questions.

Once the form is filled out, they must slather their hands with antiseptic gel before knocking on the glass door. The door is cracked open, their temperatures taken. Only then are they allowed into the airy waiting room, where all the windows are wide open, regardless of the weather. They can’t leave through the front door; they must file through a service door at the back of the building to minimize contact with other clients.

Italians have remained on high alert since the pandemic pushed them into the world’s longest and tightest lockdown in the spring, when the country emerged as the first European ground zero for the virus that causes COVID-19.

The memory of that harsh and terrifying experience, which saw convoys of coffin-laden army trucks shuttling to and from hospitals in Northern Italy, where the pandemic hit hardest, might explain why the second wave that is hitting Europe has – so far – largely bypassed Italy. Italians are still being careful.

“At the beginning of the pandemic, Italians suffered greatly,” said Danilo Patti, a urologist who works in Rome. “The lockdown was respected, and there was unity – even though Italians have a reputation for being unruly. Italians are still afraid. They don’t want to be locked down again.”

The number of COVID-19 cases in the country has been climbing steadily since it bottomed out in June and July and has run at about 1,500 new cases a day since late August. On Wednesday, Italy recorded 1,640 new cases, taking the total to more than 302,000, and 20 deaths, for a total of 35,758.

While the numbers seem grim, Europe’s other big countries view Italy with envy. On Wednesday, France recorded more than 13,000 new cases and 43 deaths; Spain saw more than 11,000 new cases and 130 deaths; in the U.K., there were 6,200 new cases and 37 deaths. Measured by total cases since the start of the pandemic, Italy now ranks fifth in Europe, after Russia, Spain, France and Britain. For much of the spring, it was first.

Italy’s relative success is partly because of the widespread respect for the safety measures put in place more than six months ago, when the explosion of cases shut the country down, and a capable tracing system. Mask use remains among the highest in Europe. A survey done by Imperial College London found that 84 per cent of Italians are “very or quite willing” to wear masks once they leave the house, compared with 76 per cent of Britons.

In Italy, mask use is compulsory on public transport and in shops, as well as in any crowded places between 6 p.m. and 6 a.m. Last month Prime Minister Giuseppe Conte, who still has emergency pandemic powers allowing him to rule by decree, ordered the closing of all discotheques, which were becoming superspreader sites in the summer. Italian police have handed out fines for mask-use violations in public places.

Rome’s Fiumicino airport, meanwhile, has introduced rapid, nasal-swab COVID-19 tests for all passengers arriving from Greece, Spain, Malta and Croatia. Last week, for the first time, the 30-minute tests were administered to passengers on Alitalia flights between Rome and Milan. Fiumicino plans to introduce even faster and simpler saliva tests as soon as the technology can be deployed on a large scale.

Italy’s testing rate for COVID-19, while rising, is relatively low by European standards – a little more than half the U.K. rate – suggesting that a lot of asymptomatic cases are not being detected.

On Wednesday, about 104,000 swab tests were done in the country. Andrea Crisanti, the University of Padua microbiologist who was the first Italian doctor to determine that asymptomatic transmission was rife in Italy, has said that 400,000 daily tests are required to keep the pandemic in check. He is advising the Italian government on how to reach that goal in a hurry, before influenza season hits.

The case load might well rise in the next few weeks, because of the school reopenings and because the cooler weather will push people back indoors, where they are more likely to pick up the virus. But there is no talk, so far, of another national lockdown like the one in the spring, which pushed Italy into deep recession. The Bank of Italy is forecasting a 9.5-per-cent drop in gross domestic product for 2020, and a second lockdown would propel that figure much higher.

Francesco Galietti, the chief executive of Policy Sonar, a geopolitical consultancy in Rome, said the government is more likely to pursue a strategy of locking down hot spots only. “The idea is to tackle any problem locally,” he said. “Another national lockdown would be too heavy-handed.”

Chinese company SinoVac says its COVID-19 vaccine should be ready by early 2021
September 24, 2020 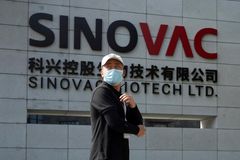 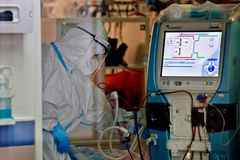