When Marina Drazba looks at the earth, she sees slope angles and scarps, tension cracks and bowed trees, evidence of moving earth.

“Landslides have signs. They’re like anything. There are warning signs,” she said.

And in Cox’s Bazar, the Bangladesh district home to nearly a million Rohingya who have fled Myanmar, those signs are everywhere. Ms. Drazba studies landslides, and the first time she saw the region in late March, “I was speechless,” she said. Most Rohingya are living in bamboo-and-plastic shelters perched on terraces carved into slopes of silt, sand and clay. The bases of hills have been cut away to make pathways and space for homes. Trees and shrubs, which stabilize soil, have been cleared.

“Just walking around the camp, I had no words,” said Ms. Drazba, a geologist. “I was sending pictures back to my geo friends, and the string of messages was basically: ‘Where are they building? How were they allowed to do this?’”

That was when things were dry. A few weeks from now, the wet season will begin, and water can decrease the stability of a slope, further raising the risk of landslides.

Between June and August, 2.5 metres of monsoon rains will fall in this region and fear is spreading that the deluge will bring landslides, flooding and water-borne diseases, multiplying the afflictions that have already befallen Rohingya driven away from torched homes. Contingency plans among humanitarian agencies include preparations for thousands of deaths, although aid workers say that does not mean such an outcome is unavoidable.

The hastily constructed Rohingya camps in Bangladesh are already in “massive violation” of general standards for refugee accommodations, said Sumbul Rizvi, senior co-ordinator with the Inter Sector Coordination Group, which manages the efforts of various international agencies. The looming weather threatens to expose the worst deficiencies. Already, children have been spotted standing on top of their homes during heavy winds in hopes of holding fast plastic roofs. Landslides have already killed children, too.

“This is another emergency we’re gearing up for,” Ms. Rizvi said, pointing to the potential for “stampedes or panic when mud mounds” – the hills on which the Rohingya are living – “collapse under their feet.”

The risks are compounded by the sheer number of people. Unicef has warned that more than 100,000 Rohingya “are at risk due to floods and landslides,” and potentially twice that number if rains are particularly intense. Monsoon-related disasters threaten nearly half the camps’ water wells and 30 per cent of latrines, Unicef said.

Across the camps, a fevered effort is under way to prepare. Some roads are being covered in bricks. People are being provided extra bamboo and bags for sand they can use to reinforce their homes. Drainage channels are being dug, some fortified with cement. Walkways are being undergirded with sandbags, and steps supported by bamboo framing. More than 15,000 people have been relocated from areas of greatest danger, and another 25,000 or more will be moved in the next six weeks. A Médecins Sans Frontières hospital has stocked enough medicine, water and generator fuel to operate independently for more than three months if roads are cut off.

“I am happy with the way we are preparing for the monsoon,” said Mohammad Abul Kalam, the Bangladesh Refugee Relief and Repatriation Commissioner, who oversees the Rohingya camps. “We didn’t leave out anything that we could do to safeguard these lives.”

His confidence, however, has done little to calm fears among Rohingya. Even in dry months, landslides have killed several children.

“I feel like there will be huge casualties during the rainy season,” said Obaidullah, 19. “I’m really scared about what’s going to happen. Only God knows.”

Tin rooftops provided by some agencies now look to Zeeya Uddin, 20, like potential scythes if they are dislodged by wind in an area also prone to cyclones. Sanowara, 18, worries that the sandbags now proliferating won’t do much against the power of a monsoon. “I’m sure it’s not going to work in the heavy rain,” she said.

“We can’t do anything, so we have to be brave,” she said. But “I really fear that my home, too, will fall down and we will be injured, or maybe even die.”

The initial contingency plan includes preparation for 5,000 bodies, said Ekram Elahi Chowdhury, project director with the Bangladesh Red Crescent Society. “It’s not an assumption” that such a number of people will die, he said. But agencies are “preparing in case.”

Some efforts to mitigate risks have been hampered by the Bangladeshi government, which has sought to keep Rohingya settlements from becoming permanent cities, in part by limiting construction of durable structures. No dedicated cyclone shelters, which require concrete and steel construction, are in place in the camps. Local authorities have not provided additional land that can be used for a mass evacuation if a cyclone approaches.

On Sunday, Bangladeshi psychologist Mahmuda offered something different instead: training for Rohingya community workers in “psychological first aid.” The six-hour class is meant to equip volunteers to help mentally strengthen Rohingya for the storms that are coming, in addition to processing the lingering horrors of what they encountered in Myanmar.

“We are giving them some sense of how they can prepare, and also giving them hope,” said Mahmuda, who works with the UNHCR. “They have to fight – because it’s their life.”

Ms. Drazba, meanwhile, has been holding her own geology-themed first-aid courses, delivering instruction in landslide basics and offering tangible ways to keep the rain from becoming deadly, including the proper placement of sandbags.

She has written a children’s-level book to help explain the concept in the simplest of terms, and a local art club has turned it into a play.

And she has sought to balance her own hopes that preparation will succeed with the reality that a large population of refugees is living on hills with a habit of giving way.

“I’m still really optimistic and hopeful,” she said. “But I know it’s unrealistic of me.”

With reporting by Amirul Rajiv 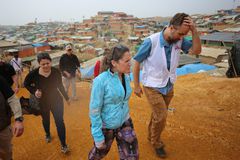 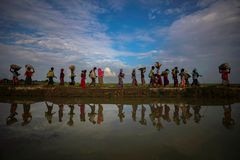