Esther Hughes isn’t taking any chances when it comes to Brexit. She’s bought a month’s worth of food, built a greenhouse to grow her own vegetables and loaded up on how-to books, including a cookbook from the Second World War that offers tips on stretching food rations.

“When we heard about Brexit, at first we were, like, ‘It should be all right.’ We thought if the government does it right, and prepares for it, it shouldn’t be that bad,” said Ms. Hughes, 28, from her home in Argyll, west of Glasgow, where she lives with her husband and three sons. “But when we started to see there weren’t answers to straightforward questions, it made us think, ‘You know what? We should hedge our bets a bit and stock up.'”

Ms. Hughes and her family are part of a wave of Britons who call themselves “preppers” and are hoping for the best but preparing for mayhem. One sign they are getting ready for widespread disruption and shortages: Sales of canned food and instant milk have jumped 10 per cent since October, according to market research firm Kantar World Panel.

With Brexit less than three months away and the government no closer to a deal with the European Union, the country is bracing for what could be a chaotic departure from the EU on March 29. On Tuesday, MPs are widely expected to reject Prime Minister Theresa May’s withdrawal deal with the EU, throwing the Brexit process into turmoil and increasing the odds that Britain will crash out without any arrangements for trade, transportation, banking and a host of other critical issues. Many business leaders worry a hard Brexit will cause havoc at the border and lead to widespread bankruptcies, job losses and a sharp devaluation of the pound.

In a tacit acknowledgment that Brexit could go badly, the government has intensified its “no-deal” planning. The Transport Department has spent £103-million ($175-million) lining up extra ferries to keep food supplies flowing. Health officials have ordered storage space for 5,000 pallets of medicine and bought £1-million worth of refrigerators to store drugs. The military is putting 3,500 soldiers on standby to handle any disorder, and roughly 80,000 businesses have been sent packages on how to get ready.

Last week the government also began broadcasting public service announcements telling people where to get information on how Brexit will affect everything from cellphone roaming charges to pet insurance, bank cards and driver’s licences. And a trial run was conducted near the Port of Dover to see how officials would cope with giant traffic jams caused by delays at customs.

The EU is getting into the act as well, launching no-deal plans that include extending aviation licences to allow British airlines to keep flying into the EU, at least for a few months.

The planning hasn’t engendered much confidence. One of the government’s ferry contracts, worth almost £14-million, has gone to a company that has no ships. The traffic test at Dover involved fewer than a hundred trucks, a fraction of the 10,000 vehicles that pass through the port every day. Several business groups have said importers could face massive delays at customs because of increased administrative processing, and others have noted that a two-minute delay at the Port of Dover could cause traffic to back up 27 kilometres on the nearby M20 motorway.

Chris Guthrie started preparing six months ago and has amassed about £600 worth of extra food and other supplies. “I started prepping in June because I could see that we would end up crashing out almost by accident and that there was never any real plan as to what leaving the EU actually looked like,” said Mr. Guthrie, 57, who works in the public service and lives in London with his partner, who has a disability. “My take on it is that certain things will become even more expensive or unavailable,” he added. “If the worst-case scenario comes true, then I’m covered for two or three months. If it doesn’t, well, I bought it all cheaply anyway.” He has filled two freezers with extra meat and stocked up on canned meat, pasta, rice, flour and other non-perishables.

He’s also worried about the Brexit planning by all levels of government. “It’s been woefully inadequate,” he said. “Everybody seems to be relying on everybody else, but nobody is actually doing much.”

The government’s haphazard efforts have left Ms. Hughes concerned as well. She moved to Scotland six years ago from London and didn’t think much about Brexit until recently. At first the family began stocking up on non-perishable items such as canned meat, beans, fruit and vegetables. “We just started up with the food thing, and then just seeing the chaos in the House of Commons made us think, 'Okay we need to take this up a notch,” she said.

The family has now bought extra flashlights, candles and a small gas-powered stove in case of power cuts. Ms. Hughes has been learning to grow tomatoes, onions and potatoes. And her husband has built a quadricycle that can carry five people and tow a trailer, just in case of gas shortages. “It’s just, like, try to stock up on everything as best as we can to the point, for instance, we’re trying to buy plates that don’t break just in case it’s going to be much harder to buy plates,” she said.

They follow Brexit developments carefully, and Ms. Hughes says she’s concerned about an economic downturn. Her background is in sales, and she’d been planning to resume working now that her children are older. But she’s worried that a hard Brexit could limit job opportunities.

Her husband, too, is growing uneasy. He runs a business that makes body armour for fencers and costumes, and while most of his customers are overseas, he’s concerned that the materials he imports could become more expensive or unavailable.

She has also discovered that she’s not alone in taking precautions. A few weeks ago, she found out about a group called 48% Preppers, which takes its name after the 48 per cent of people who voted to remain in the EU in the 2016 referendum. The group has produced a pamphlet called “Getting Ready Together,” which offers tips on what to stockpile – pasta, milk powder, rice. More than 900 people have joined in the past month, bringing the membership to 3,400.

“We weren’t sure if we were being a bit over the top thinking we need to prepare,” Ms. Hughes said. But when she found the group, she thought, “Oh wow, there are other people actually thinking like us. We want to talk to them.”

Her family in London has also started stockpiling after largely ignoring Brexit.

In the capital, Mr. Guthrie has seen civil unrest before and expects trouble. “I remember the 1970s when gas prices soared. I remember people siphoning petrol out of their neighbour’s car. It doesn’t take much for the norms to break down – all you need to do is put them under a little bit of stress,” he said.

Britain is facing far worse now, he fears, as societal divides deepen over Brexit and other issues. “I’ve never seen the country so divided,” he said. “That’s what’s really, really frightening. Whatever happens, no one will be happy.” 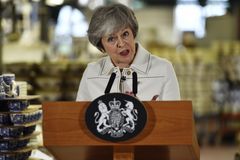 Opinion
Labour must choose democracy and self-reflection over a blindfold Brexit
January 11, 2019 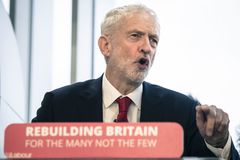 Britain’s May losing control over Brexit plans after two defeats in Parliament
January 9, 2019 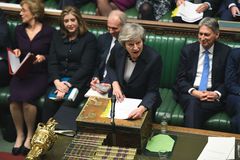