Nabil El-Kurd is no political hothead or social media expert. He’s an elderly, retired Palestinian. But he knows that the Palestinian protest movement in the Levant has fundamentally changed in the past year, especially in the past few months, and he is thrilled by what he sees.

“All of the youth of Jerusalem, Gaza, the West Bank – I am so proud of them,” he said in an interview in mid-June in front of his house in Sheikh Jarrah, the predominantly Palestinian neighbourhood in East Jerusalem experiencing an influx of Jewish settlers. “What they are doing we haven’t seen in 70 years.”

Mr. El-Kurd, 77, has a front-row seat to the new dynamic, which some political observers have called a broad-based “youth uprising” or “blossoming” – one with the potential to turn into another Arab Spring, they say.

He is the father of Muna and Mohammed El-Kurd, the 23-year-old twins who have emerged as protest leaders and social media phenomena among Palestinians – not just in Jerusalem but across the occupied and blockaded territories and among the diaspora. Muna, a journalist, has 1.6 million Instagram followers; Mohammed, a poet, has 760,000, as well as 222,000 on Twitter.

They use social media to broadcast examples of the “Jewish colonialism” they say is making their lives miserable and robbing them of a secure future. The El-Kurd home is under an eviction order, with Jewish settlers claiming historic rights to parts of Sheikh Jarrah, as they are doing in nearby Silwan, another largely Palestinian area near the Old City of Jerusalem.

The accounts of Palestinians fighting to keep their homes have gone global. Both twins were arrested by Israeli police on June 6 for allegedly participating in a riot, triggering international media coverage. They were released hours later, short-circuiting a potential new round of mass demonstrations in Sheikh Jarrah, Silwan, the West Bank and Gaza.

“The new unity among Palestinians shows that the protest movement is not just young men throwing stones,” said Gwyn Lewis, the director in the West Bank of the United Nations Relief and Works Agency for Palestine Refugees in the Near East (UNRWA). “It’s a solidarity movement, and lots of young people are involved. They are channelling that energy into a political process that is echoing across the world.”

But young Palestinians are united not just in their resistance to the occupation and the expansion of Jewish settlements – which are illegal under international law – but their rejection of the Palestinian leadership as well.

They say that Mahmoud Abbas – the 85-year-old President of the Palestinian National Authority (known as the PA) and chairman of the Palestinian Liberation Organization – the institutions around him and his cronies are sclerotic, inattentive to their political needs and undemocratic.

Apparently fearing that he and his Fatah party would lose the first presidential and legislative elections in 15 years, Mr. Abbas simply postponed them and declined to set new dates (officially, he justified the postponement by citing Israel’s silence when asked to allow the elections to be held in occupied East Jerusalem).

Young Palestinians say the old men who run the show are obsessed with their own livelihoods, not those of younger generations looking for a new path and a relationship with the Israelis who control many aspects of their lives. “The Palestinian resistance is not just against Israel, it’s against the Palestinian power structures,” said Fadi Quran, 33, a Palestinian community organizer and campaign director at Avaaz, the global online activist network.

Their anger towards the PA intensified on Thursday, when Nizar Banat, an outspoken critic of the PA, died after he was arrested in his home by Palestinian security forces. Mr. Banat’s family said he was severely beaten before being taken to the hospital, where he was pronounced dead.

The Palestinians’ fight is not so much devoted to pursuing a one-state or two-state solution – concepts that obsess their parents and grandparents – but equality, justice and liberty regardless of the future status of a sovereign Palestinian homeland – or lack thereof. “We don’t care what it looks like as long as we are free,” Mr. Quran said.

Palestinians in the West Bank, Gaza and Israel (where 21 per cent of the citizens are Arabs, with representation in the Knesset, the Israeli parliament) displayed almost no unity in recent decades. The three populations were physically separated, and a power struggle in 2006 and 2007 between Fatah and Hamas, the political and military power in Gaza that Israel, the United States and Canada consider a terror organization, led to a rupture between the two groups that has yet to heal.

While the leaders of Fatah and Hamas continued to squabble, young Palestinians throughout the region began to come together. Some were drawn to Hamas, which broadened its appeal by depicting itself as the protector of Jerusalem. It fired volleys of rockets into Israel on May 10, when clashes between Israeli police and Palestinians on the Temple Mount turned explosive. The ensuing 11-day war killed 263 Palestinians, mostly in Gaza, and 13 people in Israel.

The war further unified the Palestinians, though they were already finding common cause by protesting the accelerated eviction attempts in Sheikh Jarrah and Silwan.

“The Gaza war was a grand awakening for us,” said Salem Barahmeh, the executive director in Ramallah, the West Bank’s commercial centre, of the Palestine Institute for Public Diplomacy and leader of the Generation for Democratic Renewal, a movement that aims to teach democratic values and principles to disenfranchised Palestinian youth by holding virtual elections. “Something clicked. We saw that we are one people united by the segregation imposed upon us by the Israelis.”

Young Palestinians say their new sense of unity is partly motivated by the realization that the PA cannot protect them or give them a voice (the PA declined a request for an interview). Palestinians who are well into their 30s have never had the opportunity to cast a ballot.

The lack of elections, the age restrictions – a candidate must be no younger than 28 to join an electoral list – and the cost of running in an election in a generally poor society has led many young Palestinians to seek a different route to political power.

That route seems to centre on promoting unity among Palestinians no matter where they live, combined with a robust protest movement propelled by savvy social media campaigns.

The El-Kurd twins in Sheikh Jarrah appear to have refined this formula. An early May video in which Muna demanded that a settler leave her family’s property went viral and helped trigger mass anti-eviction demonstrations. “You are stealing my house,” Muna told the settler, to which he replied, “If I go, you don’t go back … If I don’t steal it, someone else is going to steal it.”

Raya Ziadeh, a feminist political activist who lives in Ramallah, said the social media-fuelled protest movement of the young is, in her view, already producing results and generating international sympathy. She believes it helped limit the Hamas-Israel war to 11 days – the highly destructive 2014 war lasted seven weeks – and postponed both the court-ordered evictions and a march through East Jerusalem by Israeli ultranationalists (a scaled-down march went ahead on June 15, and the court proceedings are to resume shortly).

“For the first time, we can see that we have political power,” she said. “The Palestinians started to lose hope that the Palestinian government would protect them. The alternative for us is to become more powerful than the [Palestinian] government itself. I think something very important is happening. We can change what is happening on the ground.” 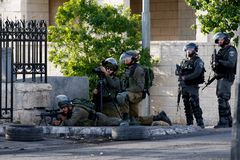 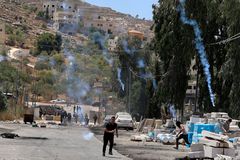