A sharpening episode of political brinkmanship is playing out on Venezuela’s borders just as new U.S. sanctions begin to bite, deepening an already grave humanitarian crisis.

The United States and other Western countries that have recognized Venezuela’s self-appointed interim leader, opposition politician Juan Guaido, have shipped aid to the border with Colombia and are preparing to send more to Venezuela’s border with Brazil and even a nearby Caribbean destination. But President Nicolas Maduro refuses to accept the shipments, saying Venezuela does not need them; his regime continues to control the borders and ports, and the standoff is tinged with the threat of violence.

But the handful of aid organizations working in Venezuela today, attempting to relieve food and medication shortages, say using aid in this way – for political leverage – is a dangerous game.

“There is a reason why these groups have kept at arm’s length from the process: This is a complete violation of humanitarian principles and more about a pressure tactic than anything intended to help the Venezuelan people,” said Geoff Ramsey, the assistant director for Venezuela at the Washington Office on Latin America, a human-rights organization.

Most Latin American countries, Canada and about 20 European nations have recognized Mr. Guaido, the leader of the National Assembly, who swore himself in as interim president on Jan. 23. He said the constitution required the move because the presidency was “vacant” – as Mr. Maduro was fraudulently elected.

Aid has already arrived in the Colombian border town of Cucuta, according to U.S. officials, while a Guiado-appointed ambassador to Brazil said Monday that a second shipment would soon be delivered to the border crossing at Boa Vista, in the Amazon, with the assistance of the Brazilian government. But Mr. Maduro is reported to have deployed his most loyal troops, and hard-line pro-Chavista colectivos, near the border with Colombia.

“The Venezuelan people desperately need humanitarian aid," U.S. Secretary of State Mike Pompeo tweeted on Feb. 6, with a photo of a blocked road. "The U.S. & other countries are trying to help, but Venezuela’s military under Maduro’s orders is blocking aid with trucks and shipping tankers.”

“They put the aid there to put Maduro into a dilemma – by stopping what people need, he is the bad guy," said Luis Vicente Leon, who heads Datanalisis, a polling and political consultancy in Caracas, in a telephone interview.

But this is far from being the first episode of politicization of food in Venezuela, he added. “Maduro is tasting his own medicine: The U.S. and the opposition are doing the same thing to him that he has done – manipulating the idea that they are the ones trying to help and, when it does not arrive, saying it is because the other side is blocking it.”

Mr. Maduro has long blamed a U.S.-led conspiracy to undermine his socialist government for the shortages that have plagued Venezuela for years. And his regime has also tied access to the increasingly scarce supply of food to political loyalty. With an estimated 87 per cent of Venezuelans living below the poverty line, many are dependent on deliveries of heavily subsidized staples such as corn flour from the Local Supply and Production Committee (CLAP in its Spanish acronym).

“I haven’t been able to ascertain that the distribution of CLAP boxes is linked 100 per cent across the board to a certain outcome, but it’s undeniable that the program itself disincentivizes opposition to Maduro,” Mr. Ramsey said.

The pictures of bridges at border points with Colombia, blocked on the Venezuelan side by tractor-trailers, are now ubiquitous in media coverage of the crisis.

The main border crossing with Colombia sees a heavy flow of traffic, as Venezuelans cross seeking food, while two of the crossings featuring in photos were never, in fact, opened to traffic after their construction in the last few years.

Mr. Leon said that while the ostentatious shipment of aid is clearly intended as a political strategy, rather than a humanitarian one, that doesn’t make the crisis less real. “The Venezuelan people are having real trouble – this is not theatre – the crisis is huge,” he said.

And with new U.S. sanctions blocking Venezuelan oil sales to what was once its principal market, an already grave situation will rapidly worsen, he said. Petroleos de Venezuela SA (PDVSA) typically sold 400,000 barrels a day of raw crude to the United States and is now scrambling to find new buyers, but financial sanctions mean the company will have trouble getting paid by any buyer it finds. Mr. Leon called it “a de facto embargo.”

“I think there’s a real risk of seeing famine and deep suffering on a scale that we haven’t seen so far in Venezuela,” Mr. Ramsey said.

The U.S. strategy seems to have been based in part on using aid as another tool to lure defections of members of the military, which so far remains loyal to Mr. Maduro. “There are a lot of ways this could go: You could envision the Colombian government and the U.S. trying to force the issue and literally driving the trucks up to the border," Mr. Ramsey said. "Or you could envision this aid staying in a warehouse in Cucuta and continuing to serve as a photo op over the next several weeks as the humanitarian situation continues to erode – driving home the message that Maduro is the one to blame – and not the effects of the oil sanctions.”

Meanwhile, the aid organizations that are actually working in Venezuela, and the United Nations, have all issued pleas to the United States and the Lima Group not to politicize humanitarian assistance. (Canada pledged $53-million last week.) “Humanitarian action needs to be independent of political, military or other objectives,” UN spokesperson Stéphane Dujarric told reporters in New York on Feb. 6.

The UN continues to dispense small amounts of aid in Venezuela through its Office for the Coordination of Humanitarian Affairs, while non-governmental groups such as the Catholic charity Caritas also distribute food and medication, relying on what Mr. Ramsey called “a blind eye” from the Maduro government.

Mr. Maduro blames Venezuela’s economic problems (including hyperinflation predicted to reach 10 million percent this year), on sanctions and a right-wing conspiracy to undermine the socialism model established by his predecessor Hugo Chavez. But his spin about the real intentions of the U.S. shipments are being bolstered by the fact that the Trump administration’s newly-appointed Special Envoy for Venezuela is Elliott Abrams, who served in the Reagan administration, and was convicted of two misdemeanours for withholding information from Congress about the Iran-Contra Affair. He solicited donations from foreign governments to arm the U.S.-backed right-wing Contras in Nicaragua, and authorized the shipment of weapons on what were listed as aid flights.

Editor’s note: Feb. 12, 2019: Luis Vincente Leon was misidentified in an earlier version of this story. 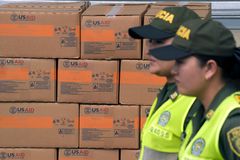 $53-million in aid for Venezuela to go to ‘trusted’ humanitarian groups, not governments, Trudeau vows
February 7, 2019 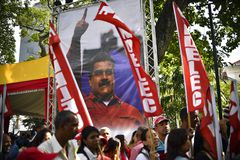 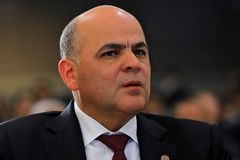