Democratic presidential hopefuls battled to distinguish themselves from among a historically large and diverse slate of candidates in the first 2020 presidential debates Wednesday night, sparring on health care, immigration and whether to impeach U.S. President Donald Trump.

The debate featured few personal attacks and relatively little focus on Mr. Trump, as 10 of the 25 Democratic candidates sought instead to promote their policy ideas, tout their records and test out campaign slogans. With so many candidates – many trailing distantly in the polls – and five different debate moderators, the format all but assured there would be little time for fireworks.

But the two-hour performance in Miami laid bare the stark divisions within the Democratic Party over the best route to White House.

Ohio Congressman Tim Ryan, former Maryland Congressman John Delaney and Minnesota Senator Amy Klobuchar used their limited airtime to deliver messages designed to woo white working class voters who abandoned the party for Mr. Trump in 2016. “We have got to change the centre of gravity of the Democratic Party from being coastal and elitist and Ivy League, to somebody from the forgotten communities that have been left behind,” Mr. Ryan said.

Massachusetts Senator Elizabeth Warren and New York Mayor Bill de Blasio aimed their messages mainly at the activist left wing of the Democratic Party that has been emboldened by the Trump presidency.

“Giant corporations have exactly one loyalty and that is to profits. And if they can save a nickel by moving a job to Mexico, or to Asia, or to Canada, they’re going to do it,” said Ms. Warren, whose campaign has focused on reforming corporate America.

For much of the evening the candidates seemed to agree on many of the issues. Nearly all said they would pursue a renegotiated Iranian nuclear deal if elected and attacked Mr. Trump for escalating tensions with Iran. “This president is literally … one tweet away from going to war,” Ms. Klobuchar said. “I don’t think we should be conducting foreign policy in our bathrobe at five in the morning.”

Most agreed that Mr. Trump’s hardline approach to a surge of asylum-seekers was misguided, after a father and daughter from El Salvador drowned crossing the Rio Grande river into Texas this week, an image of their lifeless bodies huddled together captured by a photographer.

Several outlined a climate change policy that included turning the United States into a global green energy powerhouse. Others agreed school gun violence has become a national crisis, but stopped short of proposing to confiscate firearms. Ms. Warren, among the most staunchly progressive candidates, said she favoured more research into root causes of school shootings over confiscating firearms.

The candidates sparred most intensely over whether to eliminate private insurance in favour of a single-payer health-care system, or expand government health care only for those who can’t afford insurance.

Ms. Klobuchar said she would keep private insurance intact. “I am just simply concerned about kicking half of Americans off their health insurance.”

Jay Inslee touted his record as the lone candidate to have passed a bill protecting abortion rights as governor of Washington State. "I just want to say there’s three women up here that have fought pretty hard for a woman’s right to choose,” Ms. Klobuchar responded, earning the night’s loudest applause.

With former special council Robert Mueller set to testify before Congress next month about his investigation into the Trump campaign’s links with Russia, Mr. O’Rourke said lawmakers “must begin impeachment now." Mr. Delaney said he would support House of Representatives Speaker Nancy Pelosi, who has opposed impeaching the President. “I think she knows more about the decision to impeach the President than any of the 2020 candidates combined,” he said.

Mr. O’Rourke was the most frequent target of attack. A high-profile candidate thanks to his close race for the Senate against Ted Cruz in last year’s midterms, his presidential campaign has struggled to gain traction.

Mr. Castro, a former mayor of San Antonio, Tex., and the only Latino candidate, pressed Mr. O’Rourke on his record on immigration and questioned why the former congressman hadn’t backed Mr. Castro’s proposal to decriminalize illegal immigration. “I just think it’s a mistake, Beto,” he said.

Mr. Ryan offered one of the night’s few gaffes by suggesting Taliban militants were responsible for the Sept. 11 terrorist attacks as part of an argument for why the U.S. should remain in Afghanistan.

"The Taliban didn’t attack us on 9/11. Al-Qaeda did,” countered Hawaii Congresswoman Tulsi Gabbard, who served in Iraq and favours withdrawing U.S. forces from Afghanistan.

The debates continue Thursday night. In what is seen to be the more anticipated of the two events, former vice president Joe Biden squares off against Vermont Senator Bernie Sanders, California Senator Kamala Harris, South Bend Ind. Mayor Pete Buttigieg and six others.

U.S. Democrats hopefuls agree on economic equality but not how to fix it
June 27, 2019 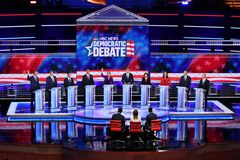 Twenty Democratic presidential candidates to take the debate stage: Everything you need to know
June 27, 2019 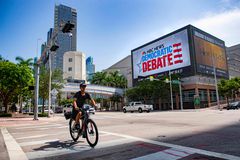 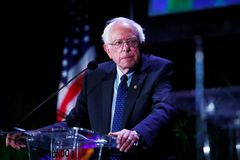