With less than two weeks until the Philippines’s newly signed anti-terrorism law takes effect, Filipino groups in Canada are calling on the Canadian government to back their opposition to the law they say will stifle dissent – even for overseas Filipinos.

Amid online campaigns such as #JunkTerrorLaw and in-person protests that have drawn hundreds of people in the Philippines, President Rodrigo Duterte signed the anti-terrorism bill into law on July 3.

In Canada, home to more than 800,000 people of Filipino descent, organizations such as Sulong UBC, Gabriela BC, Canada Philippines Solidarity for Human Rights and chapters of Migrante immediately mobilized to share information. The groups also call on local elected officials to publicly condemn the law, which organizers have criticized as having a vague definition of terrorism and providing sweeping powers to law enforcement.

Under the Philippines’s new legislation, an anti-terror council appointed by the President has the power to designate individuals and groups as terrorists.

Law enforcement can arrest terrorism suspects without a warrant, detain them for up to 24 days without charge and place them under surveillance for up to 90 days. It further removes the automatic financial penalty against law enforcement for wrongful detention.

“This is what I would call the final nail in the coffin of democracy in the Philippines,” said Chris Sorio, vice-chair of Migrante BC.

He added that because of the law’s ambiguous definition of terrorism, critics of the regime can be branded and punished as terrorists. International groups including Human Rights Watch and Amnesty International, as well as UN human rights commissioner Michelle Bachelet, have shared similar concerns.

Danelle Ortiz, secretary-general of Gabriela BC, said she felt in shock when she first heard the news. She said the law will exacerbate the harassment against members of Gabriela, a coalition of women’s organizations started in the Philippines, because the group has been “viciously red-tagged” by the Duterte regime.

“We’ve been accused of being communists and terrorists for criticizing the government’s violently misogynistic policies, militarization all over the country,” Ms. Ortiz said. “So under the anti-terror [law], this will only legitimize these continuing harassment and death threats.”

The anti-terrorism law also has an international reach, covering 10 million overseas Filipino workers and others who have resided outside the country for a long time.

“Social media also definitely makes it much more complicated because everything could easily be documented,” said Jeremiah Carag, a Sulong UBC organizer.

In response, Mr. Sorio at Migrante BC pointed to Canada’s recent decision to halt extraditions and military exports to Hong Kong in reaction to China’s national security law, which has drawn comparisons with the Philippines’s anti-terrorism law, as a step to emulate.

“It’s important that Filipinos in Canada register and pressure Canadian politicians to do more than looking and listening to our concerns,” he said.

In an e-mailed statement to The Globe and Mail, Global Affairs Canada said it understands the concerns that have been expressed around the Philippines legislation.

“We will continue to urge the government of the Philippines to ensure that human rights, freedom of speech and the exercise of civil liberties are respected in the fight against terrorism,” said Krystyna Dodds, a spokesperson.

The statement does not address the call to action by Filipino organizations around extradition or indicate a change in its approach to arms export, but notes that Canada evaluates every export permit application on a case-by-case basis.

When asked about the concerns around the law’s crackdown on dissent and calls to action by Filipino organizations in Canada, the Philippines embassy in Canada did not address the questions. Instead, it said it is referring The Globe’s inquiry “to Manila for an appropriate response.”

Prior to the embassy’s statement, senior officials in the Philippines have already been quoted in various reports assuring the law won’t be abused.

Proponents of the law, including those in Canada, also noted that it will protect against Islamist insurgencies, pointing to the five-month long conflict in Marawi city between Islamic State-linked militants and the government in 2017. There has also been a long-running rebellion led by the New People’s Army, the military arm of the Communist Party of the Philippines.

But organizers expressed distrust, noting the cyber libel cases against prominent journalist Maria Ressa and a Filipino caregiver in Taiwan who criticized the government’s handling of the pandemic. The Duterte government has also led a bloody drug war, which Ms. Bachelet criticized in a recent report as being filled with extrajudicial killings that are carried out with “near impunity.”

“It’s highly documented that even without this anti-terror law, the Philippines government has overstepped its bounds and abused human rights,” said Lara Maestro, another organizer with Sulong UBC.

The anti-terrorism law is set to take effect on July 18.

However, there are now at least two legal petitions against the law before the courts, according to the embassy’s statement. In Canada, Filipino organizers said they are planning more rallies in person and online over the next few days and weeks to prevent the law from being implemented.

“Even if Duterte is gone, any president can now use it against the Filipino people,” Mr. Sorio said. “The only way to take it away is to beat it, squash it, junk it. It’s a different struggle altogether.” 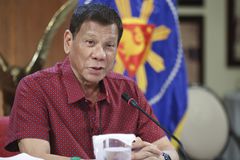 Follow Alex Nguyen on Twitter @alexnguyen2311
Report an error Editorial code of conduct
Due to technical reasons, we have temporarily removed commenting from our articles. We hope to have this fixed soon. Thank you for your patience. If you are looking to give feedback on our new site, please send it along to feedback@globeandmail.com. If you want to write a letter to the editor, please forward to letters@globeandmail.com.
Comments