Nearly seven years after Malaysia Airlines Flight 17 was shot down over eastern Ukraine, the trial in a Dutch court of three Russians and a Ukrainian accused of involvement in the downing moved Monday to the crucial merits phase, when evidence will be discussed by lawyers and judges.

Families of some of the victims were present in court to watch the latest hearing in the long-running case.

“It’s a very difficult day for us. You know, it’s now the first day of the prosecution,” said Evert van Zijtveld, whose daughter Frederique and son Robert-Jan were among the 298 passengers and crew killed when the Boeing 777 was shot down on July 17, 2014.

The trial that has progressed through a series of preliminary hearings since opening in March 2020 will in the coming days begin examining the huge case file pieced together after a years-long international investigation.

“The file consists of about 65,000 pages and many hundreds of hours of visual and audio material. It’s such a large case that it’s simply not possible to speak about every detail,” Presiding Judge Hendrik Steenhuis said at the start of Monday’s hearing, before summarizing the case.

“Up until today, no one has come forward and said that they are even partially responsible for what happened,” Steenhuis said.

The first discussions of evidence are scheduled for Tuesday.

The four suspects were not in the courtroom near Schiphol Airport and are being tried in their absence. They face life sentences if convicted of murdering the 298 people who died when the flight from Amsterdam to Kuala Lumpur was blown out of the sky above conflict-torn eastern Ukraine.

The international investigation concluded that the plane was destroyed by a Buk missile fired from territory controlled by pro-Russia separatist rebels. The investigation said that the missile was brought into Ukraine on a mobile launcher from a military base in Russia. Russia has denied any involvement.

The three Russians charged with involvement in the downing are Igor Girkin, Sergey Dubinskiy and Oleg Pulatov, as well as Ukrainian Leonid Kharchenko. Only Pulatov is being represented by defence lawyers, who have told the court he is innocent.

In Moscow, Kremlin spokesman Dmitry Peskov lamented that Russia has been kept away from the probe. “To our regret, Russia isn’t a part of the mechanism for investigating what happened, we have been effectively excluded from this mechanism,” Peskov said in a conference call with reporters.

Russia has over the years come up with various theories as to the cause of the crash, generally laying the blame on the Ukrainian side.

Peskov said Monday that the Kremlin has closely followed the trial, and “unlike many others, we don’t ignore alternative information but take it into account.”

Steenhuis warned relatives that the coming days could be tough as he outlines evidence about the deaths of their loved ones.

“Unpleasant findings may be discussed,” he said before telling people in the courtroom: “Should this become too much for you, you are at liberty to leave the room at any point in time.” 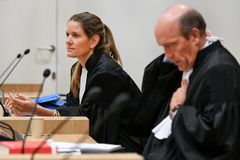 One of four suspects charged in downing of MH17 denies any involvement, wants to speak in court
Subscriber content
September 28, 2020 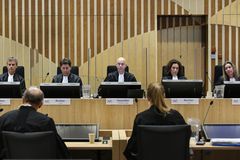