A man who drove a motorbike into police officers hours after a national security law came into force in Hong Kong last year has been found guilty of terrorism and secession under the controversial legislation.

Tong Ying-kit, 24, careened into three riot police officers on July 1, 2020. He was carrying a black flag bearing the words “Liberate Hong Kong, revolution of our times,” a common slogan of the 2019 anti-government protests, which prosecutors argued was secessionist.

Mr. Tong pleaded not guilty to both terrorism and secession, and his lawyers said he should have been charged with dangerous driving instead. But this argument failed to convince a bench of three national security judges handpicked by Hong Kong Chief Executive Carrie Lam.

Since the law came into force last year, it has been widely denounced by human-rights groups and Western governments for stifling political freedoms in the Chinese territory. Using a rarely enacted constitutional provision, Beijing bypassed Hong Kong’s administration and parliament to impose the law, which also criminalizes subversion and collusion with foreign forces.

Officials promised that only a “tiny handful” of people would be affected by the law, which they said was focused on violent extremists. Initially, arrests were scant, with Mr. Tong’s being one of the few cases. Beginning late last year, however, the law has been used to crack down on the pro-democracy opposition, with almost every prominent activist or former lawmaker currently in prison or facing trial.

With so many cases due to hit the courts, Mr. Tong’s hearing was seen as a key test for how the law would be applied.

Exercising a power granted to her under the legislation, Justice Secretary Teresa Cheng intervened to require that the case be held without a jury, citing a risk to jurors’ personal safety and the administration of justice. Mr. Tong’s defence team appealed that decision, pointing to legal rights guaranteed under the Basic Law, Hong Kong’s de facto constitution, but was unsuccessful.

Much of the trial focused on the slogan on Mr. Tong’s flag, which the defence argued was ambiguous and not necessarily secessionist.

“Liberate Hong Kong, revolution of our times” was first used by pro-independence activist Edward Leung during an unsuccessful by-election campaign in 2016. Mr. Leung was subsequently barred from standing for office and later jailed on riot charges, but the slogan was adopted by the broader opposition camp, including non-separatists, and was often heard during the 2019 protests and seen on T-shirts and phone cases or scrawled as graffiti.

The debate in court was wide-ranging, drawing on linguistics, Chinese history and even whether U.S. civil-rights leader Malcolm X could be considered a secessionist.

Judge Esther Toh, who read out a summary of Tuesday’s ruling in court, said Mr. Tong’s display of the words “was capable of inciting others to commit secession.”

She added that he was aware of the slogan’s secessionist meaning and intended to communicate this meaning to others. He also had a “political agenda,” and his actions caused “grave harm to society.”

The ruling may have effects well beyond Mr. Tong’s trial. At least two other cases currently working their way through the legal system involve people using the phrase in some way.

Nathan Law, a former protest leader now in exile in Britain, denounced the verdict via Twitter as a “political show trial.”

“The right to a jury trial is denied,” he said. “The government handpicked the judges. The judicial system in Hong Kong is weaponized to suppress.”

“They used to talk about politics, run for office, and criticize the government, but that’s not just off-limits now, it’s punishable by up to life in prison.”

Protests, once a common sight in Hong Kong, have become almost non-existent, with police exercising new anti-pandemic powers as well as the national security law to ban public demonstrations.

In June, the pro-democracy Apple Daily newspaper was forced to close, and multiple top executives at the paper face charges of colluding with foreign forces. Last week, several speech therapists were arrested under a colonial-era anti-sedition law for publishing a series of children’s books featuring sheep and wolves, which police said were intended to promote hatred of the government and “incite others to violence.”

Tuesday’s verdict is likely to exacerbate this trend, prompting many Hong Kongers to self-censor or join the growing exodus out of the city. Since last year, tens of thousands have moved, mainly to the United Kingdom, Canada and Australia.

With a report by Reuters 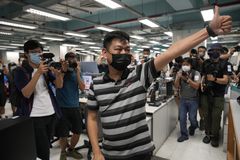 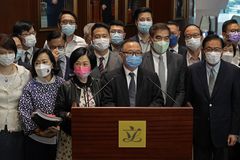 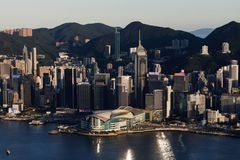