Rescue workers now focused on finding remains instead of survivors in the rubble of a Florida condominium collapse vowed Thursday to keep up their search for victims until they cleared all the debris at the site.

A fire official told family members at a meeting that crews “will not stop working until they’ve gotten to the bottom of the pile and recovered every single of the families’ missing loved ones,” Surfside Mayor Charles Burkett said at an evening news conference. He did not identify the official, but said the families were grateful.

“This is exactly the message the families wanted to hear,” he said.

The death toll rose to 64, with another 76 people unaccounted for, Miami Dade Mayor Daniella Levine Cava said. Detectives are still working to verify that each of those listed as missing was actually in the building when it collapsed.

Levine Cava said teams paused briefly atop the pile to mark the two-week anniversary of the disaster, but there was no let-up in the pace or number of rescuers at the site during the recovery phase.

“The work continues with all speed and urgency,” she said earlier Thursday. “We are working around the clock to recover victims and to bring closure to the families as fast as we possibly can.”

The painstaking search for survivors shifted to a recovery effort at midnight Wednesday after authorities said they had come to the agonizing conclusion that there was “no chance of life” in the rubble of the Champlain Towers South condo building in Surfside.

“When that happened, it took a little piece of the hearts of this community,” said U.S. Rep. Debbie Wasserman Schultz, whose congressional district includes Surfside.

Michael Stratton, whose wife, Cassie, has not officially been confirmed dead, said friends and family had accepted “the loss of a bright and kind soul with an adventurous spirit.” He was talking on the phone with his wife right when the building collapsed, and she described shaking before the phone went dead, he has told Denver’s KDVR-TV.

“This wasn’t the miracle we prayed for, but it was not for lack of trying by rescue crews whose tireless bravery will never be forgotten,” he said in a statement Thursday.

Wasserman Schultz and Florida Gov. Ron DeSantis pledged financial assistance to families of the victims, as well as to residents of the building who survived but lost all their possessions. They acknowledged the devastating toll the tragedy has taken on the relatives these past two weeks.

“Is there hope? Will we be able to have a miracle? I know it’s weighed a lot on the families,” DeSantis said.

In addition to property tax relief for residents of the building, DeSantis said, the state government will work toward channelling an outpouring of charitable donations to families affected by the collapse. Levine Cava said crews were also collecting and cataloguing a long list of personal items, including legal documents, photo albums, jewellery, wallets, and electronic goods that they would seek to reunite families with.

The Rev. Juan Sosa of St. Joseph Catholic Church met with other spiritual leaders at the collapse site, where heavy machinery worked in the rubble and mourners left flowers and photos.

“I’m hoping that they have some closure as we continue to pray for them,” he said.

The change from search and rescue to recovery was sombre. Hours before the transition Wednesday, rescue workers stood at solemn attention, and clergy members hugged a line of local officials while many of them sobbed.

He said the crews are now using heavier equipment, which makes it easier to remove the layers of the debris.

“We are expecting the progress to move at a faster pace with our recovery efforts,” he added.

Hope of finding survivors was briefly rekindled after workers demolished the remainder of the building, allowing rescuers access to new areas of debris.

Some voids where survivors could have been trapped did exist, mostly in the basement and the parking garage, but no one was found alive. Instead, teams recovered more than a dozen additional victims. Because the building fell in the early morning hours, many were found dead in their beds.

No one has been pulled out alive since the first hours after the 12-story building fell on June 24.

Meanwhile, authorities are launching a grand jury investigation into the collapse. And at least six lawsuits have been filed by Champlain Towers families. 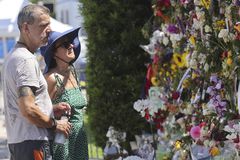 Search of collapsed condo shifts from rescue to recovery, death toll at 54
July 7, 2021 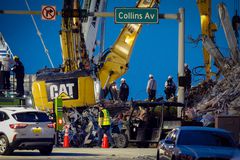 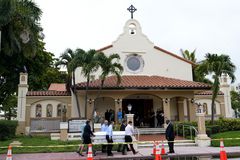