Florida’s largest hospital systems are expanding their coronavirus units, limiting visitors and fearing staffing shortages as they deal with the statewide surge that is breaking records set last year for both cases and hospitalizations.

Hospitalizations have grown tenfold around the state in just over a month as the more contagious Delta variant spreads, with more than 95 per cent of COVID-19 patients unvaccinated, officials said.

“It’s an overwhelming demand in the hospitals right now,” said Mary Mayhew, president of the Florida Hospital Association. “Now we’re dealing with a relatively new variant mutation. The dramatic increase is so different than last summer” when the previous records were set.

Florida is now leading the nation in per-capita hospitalizations for COVID-19. The state had 10,389 COVID-19 hospitalizations Monday, according to the hospital association. That’s almost 200 more than Sunday, when the state broke the previous record set on July 23, 2020, more than a half-year before vaccinations started becoming widespread. It then had 10,170 hospitalizations. More than 39,000 Floridians have died since March, 2020, including more than 400 last week.

Federal health data released Saturday showed that Florida reported 21,683 new cases of the virus, the state’s highest one-day total since the start of the pandemic. Those numbers were recorded Friday and released Saturday on the U.S. Centers for Disease Control and Prevention’s website.

Republican Florida Governor Ron DeSantis says the surge is seasonal, caused by people gathering inside to avoid the summer heat and humidity. He has barred local governments and school districts from imposing mandatory mask mandates and vaccine requirements.

But throughout the state, hospitals are again seeing their COVID-19 wards filling after nearly emptying in June.

Baptist Health in Miami has opened several new COVID-19 units at its hospitals to house its more than 220 infected patients, a 140-per-cent increase in two weeks, and is preparing to open another unit this week. Dr. Sergio Segarra, its medical director, said it was “a big mistake” for the state to drop mask mandates.

Dr. Segarra fears there won’t be enough nurses, respiratory therapists and other workers to staff the new units – a concern other hospital officials have also voiced.

Ed Jimenez, chief executive officer of University of Florida Health Shands in Gainesville, said coronavirus patients are some of the most labour intensive, leaving doctors, nurses and others exhausted when their numbers increase. His emergency room staff is again wearing N-95 masks at all times and that protocol will likely soon expand to other departments. His hospital now has 146 patients with the virus, up from 14 a month ago and just short of its all-time high of 157 in January.

Mr. Jimenez urged the unvaccinated to get their shots to help medical workers and to prevent the state’s smaller hospitals from being overrun. He fears smaller institutions will soon be forced to send patients with broken bones and less serious illnesses to major regional hospitals, like his that are 50 or more miles away. Many of the small, rural counties outside Gainesville have vaccine rates of less than 40 per cent and many are seeing some of the worst outbreaks on a per-capita basis.

“If you live in that community and you need to go to the hospital, what is going to happen?” he said.

AdventHealth in central Florida said most COVID-19 patients will no longer be allowed to have visitors, with exceptions made for children, new mothers and the dying. AdventHealth’s said the visitation ban is being implemented because nurses have to help visitors into protective gear, taking away time from caring for patients.

The chain said it had 1,060 COVID-19 patients on Friday, the most recent numbers it’s reporting. That surpassed the previous peak of 908 patients last January. As recently as June 9, the number of COVID-19 patients had dipped to 126.

The Jacksonville area is getting hit particularly hard. Many counties in that area have vaccinations rates of below 40 per cent, according to the state.

At the two University of Florida Shands hospitals in Jacksonville, 218 COVID-19 patients were hospitalized Monday, with 56 of those in intensive care. In less than two months, that is a 1,500 per cent increase in overall patients and an 1,100 per cent increase in ICU patients. It also is well above the January prevaccination peak when 125 COVID-19 patients were hospitalized and 29 were in ICU.

Tallahassee Memorial said it now has 70 COVID-19 patients, up from a daily average of five in June. Dr. Dean Watson, the hospital’s chief integration officer, said that when the staff saw local vaccination rates were less than 50 per cent a few weeks ago, “we knew we were in trouble.”

“This Delta variant is no joke,” Dr. Watson said. 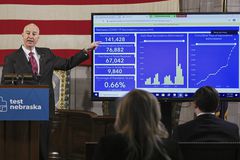 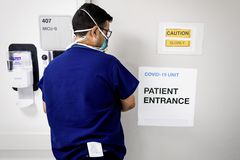