The former president of Catalonia, Carles Puigdemont, has been prevented from travelling to Canada for a series of events in Quebec sponsored by the nationalist St. Jean Baptiste Society.

Mr. Puigdemont has been living in exile in Waterloo, Belgium, since October, 2017, when he fled Barcelona along with a group of cabinet ministers in the wake of a failed attempt to declare the region independent. They are wanted in Spain on charges of rebellion, sedition and using public funds to hold a referendum on independence that Madrid said was illegal. Spain has tried to extradite Mr. Puigdemont twice without success and it has now withdrawn a European arrest warrant. However, he faces immediate arrest if he returns to the country.

The ex-president had been invited by the St. Jean Baptiste Society for a four-day visit to Quebec starting on April 2. He was slated to hold meetings with Members of the National Assembly and attend several events at universities and community organizations across the province. He applied for an electronic travel authorization (ETA) at the end of March and was promptly approved by Canadian immigration officials. However, the ETA was revoked on April 1 without an explanation and Mr. Puigdemont had to cancel his plane ticket.

Canada requires ETAs for travellers from countries such as Spain that are visa-exempt, which means visitors don’t need a visa to come to Canada. It’s usually a straight-forward online process that takes a few minutes to complete and the ETA is valid for seven years. Applicants are asked a few questions about their health, criminal background and travel plans.

“We don’t understand that decision,” said Gonzalo Boye, a Madrid-based lawyer who represents Mr. Puigdemont. “Especially coming from a country that is so friendly with and so understandable with the situation of Catalonia.” Mr. Boye added that Mr. Puigdemont has hired Montreal lawyer Stéphane Handfield to challenge the decision.

St. Jean Baptiste Society president Maxime Laporte said in a statement that “It was absolutely shameful that Canada has once again been complicit to Spanish authoritarianism.” He called on the federal government to reverse the decision and added that Ottawa “had no authority, and no legitimacy, to refuse Quebeckers the right to warmly invite international leaders that inspire them.”

Mathieu Genest, a spokesman for immigration minister Ahmed Hussen, said he could not comment on specific cases. But he said “reasons someone can be found to be inadmissible [by a visa officer] include criminality, having a serious health problem, having lied in their application or during an interview.” The applicant is sent a letter outlining why the ETA was refused, he added, and the traveller can supply additional information to clear up the issues.

In a recent interview with The Globe and Mail at his home in Waterloo, Mr. Puigdemont praised Quebec separatists and said he hoped to visit the province one day as an independent country. “There has been for a long time a great sympathy and friendship between the sovereignty movement in Catalonia and the sovereignty movement in Quebec,” Mr. Puigdemont said. “And especially now we have received the support of the independence movement in Quebec. We would like to thank them enormously.” He also praised the Canadian government for allowing two referendums on Quebec sovereignty. Canada “shows us that there is a democratic way of recognizing each other and how to respect the result.”

Mr. Boye said Mr. Puigdemont will reschedule the trip if the ETA is granted. “There are no hard feelings,” he said. “We cannot blame a country for something that a civil servant has done.”

The decision came a day after elections in Spain that left the Socialists with the most seats in parliament but needing the support of other parties to form a government. 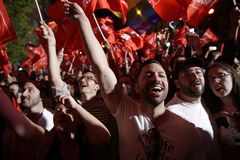 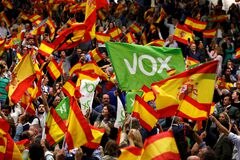 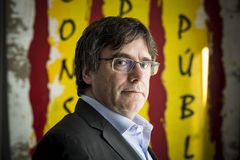