Lawyers for Paul Rusesabagina, who inspired the film Hotel Rwanda, say he has been held incommunicado by Rwandan authorities for the past 11 days after an illegal “extraordinary rendition” on a Bombardier jet owned by a charter company with business links to President Paul Kagame.

The allegations are made in a 14-page appeal to the United Nations rapporteur on torture, Nils Melzer, seeking his urgent intervention in the case, which has sparked concern from international human-rights advocates and politicians.

Mr. Rusesabagina, a former hotel manager, was lauded as a hero for protecting more than 1,200 people at a luxury hotel in Kigali during the 1994 genocide, in which an estimated 800,000 people were killed. He was portrayed by actor Don Cheadle in Hotel Rwanda in 2004 and has received a number of international awards, including the U.S. Presidential Medal of Freedom.

Mr. Rusesabagina, a 66-year-old Belgian citizen and U.S. permanent resident, was shown in handcuffs at a Rwandan police station last week. In a television appearance Sunday, Mr. Kagame denounced him as a “terrorist” with the “blood of Rwandans on his hands” who must “pay for these crimes.”

Those statements show that Mr. Rusesabagina “is at immediate and serious risk of torture or cruel, inhuman or degrading treatment or punishment,” the lawyers said in their letter to the UN rapporteur.

They also cited “the long-standing persecution” he has faced from the Rwandan government, his incommunicado detention, his need for daily heart medication and “the egregious human-rights violations involved in his forced return to Rwanda.”

Jared Genser, a U.S.-based human-rights lawyer who has joined Mr. Rusesabagina’s legal team, said the statements by Mr. Kagame “give licence to police and prison authorities” to torture or murder him in custody.

In his television appearance, Mr. Kagame denied Mr. Rusesabagina was kidnapped in Dubai and forcibly taken to Rwanda, as his family and lawyers have alleged.

He hinted that Mr. Rusesabagina had been fed a false story that tricked him into voluntarily boarding the plane in Dubai. “It was actually flawless,” Mr. Kagame said.

After gaining fame from the film, Mr. Rusesabagina criticized the Kagame government in an autobiography in 2006 and has increasingly feuded with the government, which has denied that his actions during the genocide were heroic.

He helped found a Rwandan opposition group, and the government has alleged the group has an armed wing that has launched attacks in Rwanda.

U.S. Senator Tim Kaine is among those who have raised concerns about the arrest. “While the circumstances surrounding the arrest are currently unclear, what is certain is the government of Rwanda’s mistreatment of its political opponents,” Mr. Kaine said in a letter to U.S. Secretary of State Mike Pompeo asking the State Department to seek guarantees for Mr. Rusesabagina’s safety in custody.

The Globe and Mail, in an investigation in 2014, found evidence that Rwandan authorities have plotted the murder of opposition leaders in exile. South African prosecutors have alleged that Rwandan citizens with close links to the Kagame government were responsible for the murder of dissident Patrick Karegeya in Johannesburg in 2013.

Mr. Genser, in a statement Monday, said any legal action against Mr. Rusesabagina that emanates from an extraordinary rendition would be illegal under international law.

Rwandan authorities initially said they arrested Mr. Rusesabagina as a result of “international co-operation.” But his lawyers say this is false.

In their appeal to the UN rapporteur, the lawyers gave the first detailed account of how Mr. Rusesabagina was flown to Rwanda within a few hours of his arrival in Dubai on Aug. 27.

Citing flight records and statements by the government of the United Arab Emirates, they say he was flown to Rwanda on a Bombardier Challenger 605 with tail number SX-FSA that was operated by a private jet charter company. The company had previously been hired by the Rwandan government on a number of occasions and has flown Mr. Kagame to a European destination at least once, the lawyer said. 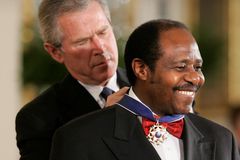 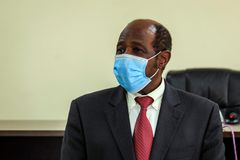