British Prime Minister Boris Johnson has repeatedly rejected calls for a fresh vote on Scottish independence following one in 2014 that resulted in a vote to stay part of the United Kingdom.

Opinion polls in the last 12 months have shown historically high support for independence. The May 6 election is seen as a critical test of public sentiment in Scotland, with an opportunity for the Scottish National Party (SNP) that Sturgeon leads to put fresh pressure on Johnson.

Announcing the new party in a statement broadcast on Twitter, Salmond said its aim was to maximize the number of pro-independence lawmakers.

“The parliament has to have, I believe, not a bare majority for independence within it, but a super majority that changes the balance fundamentally into Scotland’s favour,” Salmond said.

He confirmed he would stand as a candidate.

However, the formation of a new party could split support and keep bitter divisions within the secessionist cause to the fore in campaigning.

As SNP leader, Salmond led the devolved Scottish government for seven years until 2014 and helped drive growing support for independence. He was the most prominent pro-independence figure in the 2014 referendum, when Scots rejected independence by 55 per cent-45 per cent.

Salmond and current First Minister Sturgeon were close friends and allies, but they fell out after several women made sexual harassment complaints against him.

Salmond was acquitted in 2020 of charges of sexual assault. He has portrayed himself as the victim of a conspiracy to drive him out of public life, and won 500,000 pounds in legal costs from the Scottish government after its handling of an investigation into his behaviour was ruled unlawful.

Sturgeon herself faced two investigations into her role. Both reported their findings this week, with one independent inquiry exonerating her but another, led by a parliamentary committee, saying she had given misleading evidence.

She dismissed the latter as partisan, and also saw off a subsequent vote of confidence.

Salmond said the Alba Party would avoid splitting the pro-independence vote because it would encourage people to vote SNP in constituency-specific seats, but to vote for his new party where seats are allocated according to larger regional lists. Each voter gets two votes.

The system is designed to make the final result more proportional, and can help smaller parties gain a foothold in the parliament. The legislature has some limited tax-raising powers and responsibility for areas such as health and education.

However, constitutional experts say it probably does not have the power to unilaterally call a referendum without permission from the UK-wide government in London.

SNP lawmaker Humza Yousaf, the Scottish justice minister, captured concerns about splitting the pro-independence vote, tweeting that poor performance in the regional list vote had cost his party an outright majority in 2016.

But Salmond said success for his party would lead to more pro-independence lawmakers in Scotland’s parliament and add fresh momentum to the independence drive.

“Boris Johnson has already said no to the SNP proposals, he will find it much more difficult to say no to a parliament, and a country,” he said. 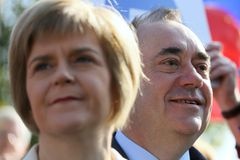 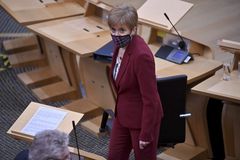