Four lawyers who prosecuted Roger Stone quit the case on Tuesday after the U.S. Justice Department said it would take the extraordinary step of lowering the amount of prison time it would seek for President Donald Trump’s long-time ally and confidant.

The decision by the Justice Department came just hours after Mr. Trump complained that the recommended sentence for Mr. Stone was “very horrible and unfair.” The Justice Department said the sentencing recommendation was made on Monday night – before Mr. Trump’s tweet – and prosecutors had not spoken to the White House about it.

The four lawyers, including two who were early members of special counsel Robert Mueller’s Russia team, had made up the Justice Department’s trial team and had signed onto a Monday court filing that recommended up to nine years in prison for Mr. Stone.

The department’s decision to back off the sentencing recommendation raised questions about political interference and whether Mr. Trump’s views hold unusual sway over the Justice Department, which is meant to operate independently of the White House in criminal investigations and prosecutions.

Attorney-General William Barr has been a steady ally of Mr. Trump’s, clearing the President of obstruction of justice even when Mr. Mueller had pointedly declined to do so and declaring that the FBI’s Russia investigation – which resulted in charges against Mr. Stone – had been based on a “bogus narrative.”

On Monday night, prosecutors had recommended Mr. Stone serve seven to nine years behind bars after being convicted of charges, including lying to Congress, witness-tampering and obstructing the House investigation into whether the Trump campaign co-ordinated with Russia to tip the 2016 election. The recommendation raised the prospect that Mr. Stone could receive the harshest sentence of any of the half-dozen Trump aides charged in Mr. Mueller’s probe.

In a tweet early Tuesday, Mr. Trump said the case against Mr. Stone was a “miscarriage of justice.” A Justice Department official said authorities decided to step in and seek a shorter sentence because they had been taken by surprise by the initial recommendation. The person, who spoke on condition of anonymity, said prosecutors had told the department to expect a shorter recommendation.

It is extremely rare for Justice Department leaders to reverse the decision of its own prosecutors on a sentencing recommendation, particularly after that recommendation has been submitted to the court. Normally, U.S. attorneys have wide latitude to recommend sentences on cases that they prosecuted.

The departures came abruptly after the decision by Justice. Jonathan Kravis resigned his position as an assistant U.S. attorney. He had been a veteran prosecutor in Washington, and though not part of Mr. Mueller’s original team, was nonetheless involved in multiple cases brought by the special counsel’s office. Besides the Stone prosecution, Mr. Kravis had also signed onto the case against former Trump campaign chairman Paul Manafort, which resolved with a guilty plea, and against a Russian troll farm accused of sponsoring a cover social-media campaign aimed at dividing public opinion during the 2016 presidential election.

Aaron Zelinsky quit the case and his job in Washington, and would go back to his job as a federal prosecutor in Baltimore. He was working there when he was selected in 2017 for the Mueller team.

He was involved in cases aimed at determining what knowledge the Trump campaign had about Democratic e-mails that were hacked by Russia and what efforts Trump aides made to get information about them. He was also involved in the prosecution of George Papadopoulos, the former Trump campaign aide who played a critical role in the FBI launching its investigation in the summer of 2016.

By Tuesday evening, a fourth prosecutor, Michael Marando, had left the case.

After the lawyers quit the case, Justice Department officials filed a revised sentencing memorandum with the judge, arguing its initial recommendation could be “considered excessive and unwarranted under the circumstances,” but that it would defer to the court. None of the original prosecutors in Mr. Stone’s case signed onto the revised memo.

Sentencing decisions are ultimately up to the judge, who in this case may side with the original recommendation. U.S. District Judge Amy Berman Jackson has repeatedly scolded Mr. Stone for his out-of-court behaviour, which included a social-media post he made of the judge with what appeared to be crosshairs of a gun.

The judge barred Mr. Stone from social media last July after concluding that he repeatedly flouted her gag order.

Meanwhile, Democrats decried the decision, with Senate Minority Leader Chuck Schumer calling for an investigation by the DOJ’s Inspector-General.

“The rule of law and this grand, grand tradition of this wonderful Justice Department is being totally perverted to Donald Trumps’ own personal desires and needs,” the New York Democrat said. “And it’s a disgrace.’’

House Intelligence Committee Chairman Adam Schiff said it would be a blatant abuse of power if the Justice Department intervened on behalf of Mr. Trump.

“Doing so would send an unmistakable message that President Trump will protect those who lie to Congress to cover up his own misconduct, and that the Attorney-General will join him in that effort,” the California Democrat said.

Mr. Trump later told reporters that he didn’t speak to Justice officials. “I would be able to do it if I wanted," he said. ”I have the absolute right to do it. I stay out of things to a degree that people wouldn’t believe, but I didn’t speak to them.”

Federal prosecutors also recently softened their sentencing position on former national security adviser Michael Flynn, saying that they would not oppose a probation of punishment after initially saying that he deserved up to six months in prison for lying to the FBI. The Flynn prosecution is also being handled by the U.S. Attorney’s Office in Washington.

In the the initial memorandum on Monday evening, prosecutors asked for Mr. Stone to serve between 87 and 108 months in federal prison – the sentence they said was in line with federal guidelines. Such a sentence would send a message to deter others who might consider lying or obstructing a congressional probe or tampering with witnesses, they said.

The prosecutors wrote in the court papers that “Stone’s actions were not a one-off mistake in judgment” and that he “decided to double – and triple – down on his criminal conduct by tampering with a witness for months in order to make sure his obstruction would be successful.”

Mr. Stone has denied wrongdoing and consistently criticized the case against him as politically motivated. He did not take the stand during his trial and his lawyers did not call any witnesses in his defence.

Witnesses in the case testified that Trump’s campaign viewed Mr. Stone as an “access point” to the anti-secrecy site WikiLeaks, which was in possession of more than 19,000 e-mails hacked from the servers of the Democratic National Committee and tried to use him to get advance word about hacked e-mails damaging to Hillary Clinton.

Prosecutors charged that Mr. Stone lied to Congress about his conversations about WikiLeaks with New York radio host Randy Credico – who had scored an interview with WikiLeaks founder Julian Assange in 2016 – and conservative writer and conspiracy theorist Jerome Corsi. 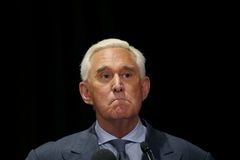 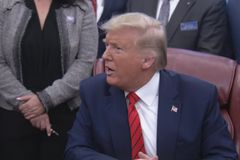