Leaders of EU countries on the Mediterranean were expected on Thursday to send a clear warning to Turkey at an emergency summit hosted by French President Emmanuel Macron, who denounced what he called “unacceptable” provocations amid growing tensions with Ankara.

Heads of states and government of France, Greece, Cyprus, Malta, Italy, Spain and Portugal gathered in Corsica amid fears of open conflict as Turkey seeks to expand its energy resources and influence in the eastern Mediterranean.

Turkish leaders have lashed out at France and the EU for siding with Greece and Cyprus in the dispute.

“Turkey is no longer a partner in this region,” Macron told reporters ahead of the island summit. “We Europeans need to be clear and firm” with the government of Turkish President Recep Tayyip Erdogan about its “inadmissible behaviour,” he said.

Macron didn’t elaborate on what specific actions he wants European countries to take, but said they should lay out “red lines” with Turkey and try to restart dialogue.

“We Mediterraneans need to live in peace,” the French leader said.

“Our goal is to avoid all escalation, but avoiding escalation should not mean passiveness or acceptance,” he added. “It is up to Turkey to clarify its intentions.”

During a bilateral meeting with Greek Prime Minister Kyriakos Mitsotakis, Macron reaffirmed his support toward the respect of Greece’s sovereignty, his office said.

Greece and Turkey have deployed naval and air force units to assert competing claims over energy exploration rights in the eastern Mediterranean. Turkish survey vessels and drill ships continue to prospect for gas in waters where Greece and Cyprus claim exclusive economic rights.

France is carrying out military patrols in the region in a show of support for Greece and Cyprus, and the EU is mulling new sanctions against Turkey.

Separately from the diplomatic discussions, Turkish and Greek military officials met Thursday at NATO headquarters, as part of ongoing meetings aimed at reducing the risk of armed conflict. Greece and Turkey both are NATO members.

Turkey’s Foreign Ministry characterized Macron’s statement as “arrogant” and in line with “old colonial reflexes.” It accused the French president of stoking tensions and putting the “greater interests” of Europe at risk.

“It is not for Macron to determine the maritime jurisdiction of any country in the Mediterranean” or anywhere else, the Turkish ministry said in a statement.

“We have trouble with colonial minds like yours, Mr. Macron,” Justice and Development Party spokesman Omer Celik said on Twitter.

He said that Turkey is looking beyond Greece and is “a major destabilizing factor in the wider area,” citing Turkish government actions in Libya, Syria and beyond.

He said that Greece would not provoke conflict but wouldn’t just sit back waiting for European help to arrive: “At the end of the day, we will defend ourselves, even alone.”

At the Corsica summit, France wants the European leaders to push for resuming German mediation in the eastern Mediterranean dispute. Russia also offered this week to mediate.

The leaders also plan to discuss EU and NATO operations in the Mediterranean and their relation to Turkey.

But the other countries at the Corsica summit have different priorities. Italy, Spain and Malta are notably more concerned about migrant boats arriving from North Africa to their shores. Portugal. meanwhile, has little stake in the tensions around the eastern Mediterranean.

France and Greece hope the seven countries can come up with a united southern European front ahead of a full EU summit later this month focused on the bloc’s strategy toward Turkey.

EU Council President Charles Michel will travel to Greece, Cyprus and Malta next week for talks with leaders. 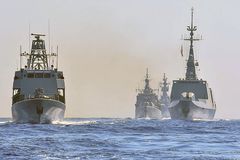