President Emmanuel Macron stood his ground as trade unions on Thursday brought tens of thousands of demonstrators onto the streets in a make-or-break push to force him to abandon his planned pension reform.

Teargas swirled in Paris where riot police charged at demonstrators who hurled projectiles and lobbed insults in cat-and-mouse skirmishes as darkness fell.

Some protesters dressed in black and hiding their faces daubed anarchist slogans on buildings and the windows of several properties, including a Starbucks cafe, were smashed.

The country’s hard-left unions rallied supporters hoping to regain momentum at a time when participation in a 36-day long public sector strike has waned and opinion polls show public backing for the industrial action has dropped. But turnout was down sharply from the previous nationwide protest marches.

“The ball is in the government’s camp. Either they listen, or they govern against the people’s will,” hard-line CGT union boss Philippe Martinez told reporters.

Macron wants to streamline France’s unwieldy pension system and provide incentives for people to stay in work longer to pay for some of the most generous retirement benefits in the industrialized world.

The proposed reform would be the biggest overhaul of the system since World War Two and is central to the president’s drive to make the labour force more flexible and more competitive globally.

While the CGT and other hard-left unions are demanding the reform be scrapped altogether, France’s largest union, the reform-minded CFDT is open to Macron’s planned single “points” system that treats contributions from all workers equally.

But it refuses to accept the proposal that French workers work two years longer, until the age of 64, to receive a full pension. CFDT boss Laurent Berger said this crossed a red line.

But in the strongest signal yet that the government has not dropped the increased retirement age from the draft bill, which has not yet been made public, Budget Minister Gerald Darmanin said such a move was “fair and efficient.”

“What is certain is that we must work longer,” Darmanin told Le Figaro newspaper.

If he succeeds in defeating the unions – he has already succeeded in reforming state-run SNCF railways and in easing labour laws – he will strengthen his hand to embark on further pro-business reforms as he eyes re-election in 2022.

The interior ministry said 452,000 people nationwide answered the union leaders’ protest call, a significant decline since the first big day of action on Dec. 5, which brought 806,000 onto the street.

Rail services were disrupted, schools shut and power generation by EDF was cut by about 10 per cent.

Rail workers and teachers, lawyers and nurses railed against a president they accuse of turning a deaf ear to popular feeling.

While the strikes are the longest-running in decades, they have failed to paralyze France in the way achieved by a wave of industrial action in 1995 that forced a government U-turn from which the prime minister of the day never recovered.

Hard-left unions argue Macron’s reform amounts to an attack on hard-earned benefits that help compensate for salaries below those in the private sector and will ruin public services.

“If there are no retirement perks, there’s no reason to stay in the public sector,” said teacher Antoine Rouilly in the southwestern city of Toulouse. 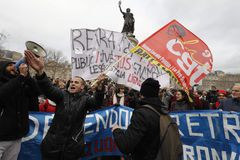 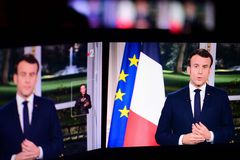 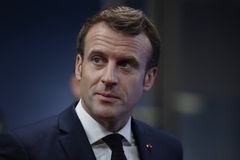