Group of Seven countries underlined their commitment to defend liberal democracies against Russian interference Monday and outlined plans to set up a working group to examine Russia’s “malign behaviour” on foreign soil.

G7 foreign and security ministers made the announcement at a meeting in Toronto. However, the summit was sidetracked Monday afternoon when a van mowed down pedestrians in north Toronto, killing ten people and injuring 15 others.

Speaking to media at the Metro Toronto Convention Centre Monday afternoon, Public Safety Minister Ralph Goodale declined to speculate on the motive for the incident as an investigation was continuing. He said he had no information to suggest it was linked to the G7 summit or that the government needs to change the national terrorism threat level.

Foreign Affairs Minister Chrystia Freeland said that while the G7 work continues, “this is a very sad day for the people of Toronto and the people of Canada.”

In the morning, British Foreign Secretary Boris Johnson said the G7 will create a working group on Russia. He said the group would look into Russian assassination attempts on foreign soil, cyberwarfare activities and disinformation campaigns, particularly after the recent nerve-agent attack on a former Russian spy and his daughter in Salisbury, England.

“Russia is so unbelievably clever at kind of sowing doubt and confusion and spreading all this fake news and trying to muddy the waters. So we think there’s a role for the G7 in just trying to provide some clarity about what we all collectively think the Russians are doing in terms of malign behaviour,” Mr. Johnson said.

He said talks at the ministerial meeting, which are taking place at the University of Toronto, focused on the response to the Salisbury attack, especially the co-ordinated action taken by 28 countries, including Canada, to expel more than 150 Russian diplomats in March.

Ms. Freeland, however, appeared to walk back Mr. Johnson’s remarks on Monday afternoon, saying the working group on Russia is only a proposal for G7 leaders to consider.

Speaking more broadly about discussions with her G7 counterparts, Ms. Freeland said foreign and security ministers agreed on the need to address Russian “interference in elections and disinformation campaigns.”

“We committed to both hearing information about what is happening and also to working together to prepare some concrete ideas on how to make our democracies more resilient,” Ms. Freeland said. “In terms of the specific responses, that is the homework which we ministers gave ourselves and committed to bring to our leaders.”

Acting U.S. Secretary of State John Sullivan did not directly address concerns over allegations of foreign interference by Russia on Monday, but noted that the United States stands with its G7 allies in confronting “Russian malign behaviour.” He encouraged continued dialogue with Russia.

Mr. Sullivan led the U.S. delegation to the G7 meeting, as U.S. President Donald Trump’s pick to become the next secretary of state, CIA Director Mike Pompeo, is in the midst of confirmation hearings for his new appointment. Mr. Pompeo recently made headlines over a meeting he took with North Korean leader Kim Jong-un during Easter weekend.

Canada is playing host to G7 ministers in Toronto until Tuesday, when security ministers plan to discuss the global threat environment, how to prevent violent extremist use of the internet and cybersecurity. The meeting takes place ahead of the G7 leaders’ summit in Charlevoix, Que., this June.

Trump says he will impose new sanctions on Russia as soon as they deserve it
April 18, 2018 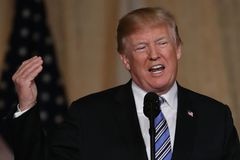 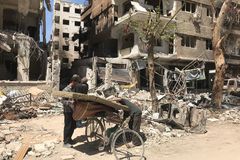 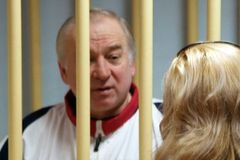