Three weeks after Russia began its invasion of Ukraine, Georgian MP Alexander Elisashvili, a member of the small opposition Citizens Party, found himself overcome with rage and made his way into Ukraine – to fight the invaders.

He is now using Facebook posts to explain why. “I couldn’t watch this fight from a distance,” he wrote on March 13, accompanied by a photo of his green Foreign Legion uniform, one sleeve decorated with small Georgian and Ukrainian flags. “That’s why I am here, in Ukraine … We must defeat the enemy. Glory to Ukraine!”

The politician-soldier became an instant hero among many – perhaps most – Georgians, who generally view Russian aggression in Ukraine with trepidation verging on outright fear. They ask: Are we next?

“Georgia is the most vulnerable country in the world for the next potential Russian aggression,” Giorgi Khelashvili, a governing party MP and deputy chairman of parliament’s foreign relations committee, said in an interview with The Globe and Mail. “We are Ukraine No. 2 in a sense.”

The Georgian government itself does not share Mr. Elisashvili’s enthusiasm for fighting Russians. It fears provoking the Russian bear, knowing full well that the small Georgian Defence Forces could not possibly win a war against its powerful neighbour.

Georgia quickly emerged as the loser in the last conflict between the two countries, in 2008, when Russia gained full control of two breakaway Georgian provinces – South Ossetia, in the north-central part of the country, and Abkhazia, in the far northwest – and stuffed them both with Russian military personnel.

The Georgian economy is also closely tied to that of Russia, which means that any Russian-imposed trade and energy sanctions could plunge the country into deep recession – or worse. They might hurt Europe, too, since Georgia is the transit country for two oil pipelines and one gas pipeline from Azerbaijan, which has maintained friendly ties with Russia.

Georgia (population 3.7 million) is a small former Soviet republic wedged between the Caspian and Black seas, at the intersection of Asia and Europe. It’s in a tough neighbourhood, sharing borders with Russia to the north, Azerbaijan and Armenia to the southeast, and Turkey to the southwest.

Russia maintains a large military base about 60 kilometres northwest of Tbilisi, near the city of Tskhinvali, the Russian-declared capital of South Ossetia and the site of the main battle in the 2008 Russia-Georgia war, which saw the Georgian forces stage a bloody retreat after only three days of fighting.

The base holds 4,500 soldiers, including a tank battalion, an artillery division and a drone company (some of the soldiers reportedly have been deployed to Ukraine). Abkhazia is home to another Russian military base. 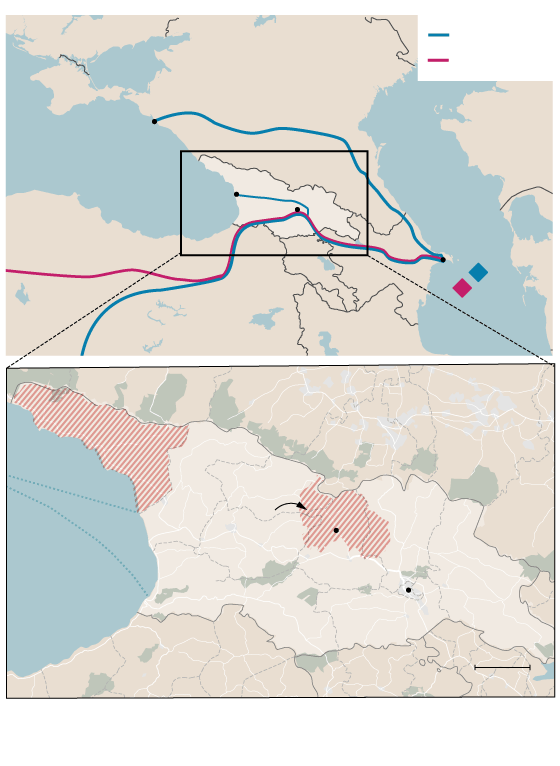 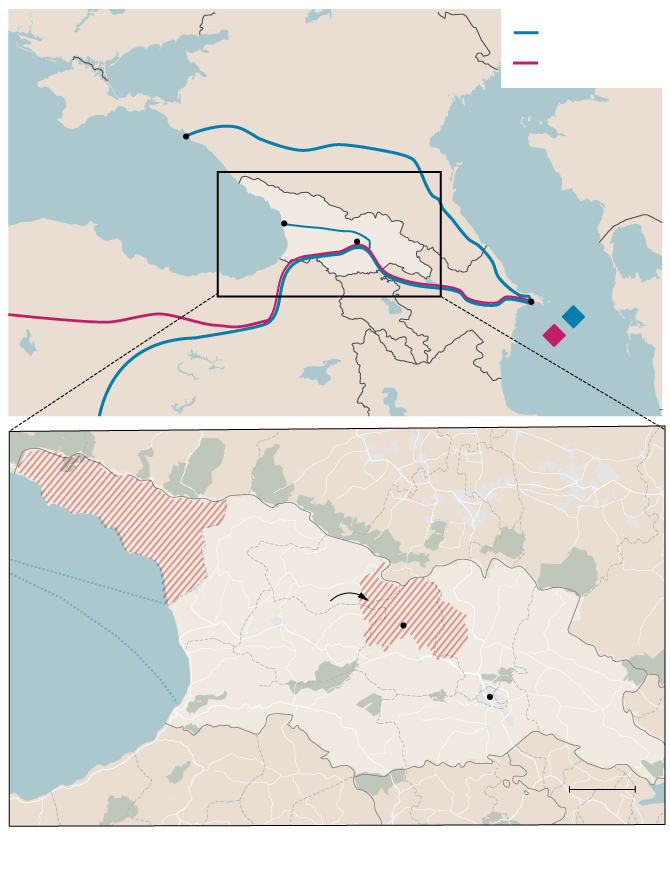 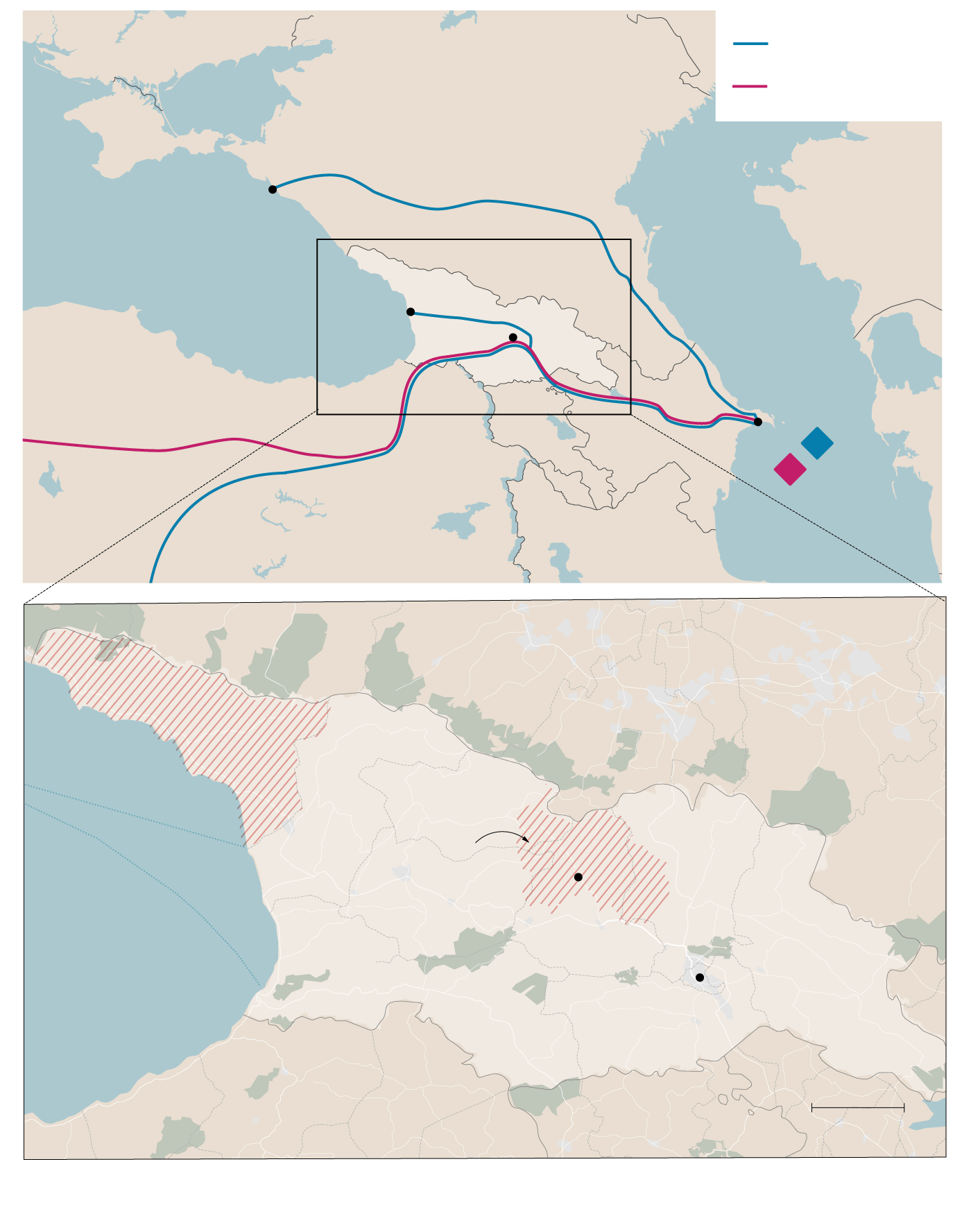 Americans and other foreigners in Tbilisi say Georgians were tense even before the war in Ukraine and are even more so now. Some of them say Georgia is “walking the tightrope” between Europe and Russia. It wants to join NATO and the European Union yet is wary of angering Russia, as Ukraine did with its attempts to join the Western military alliance and forge ever closer ties to the EU. Georgia’s high-wire act has proven to be shaky.

The Red Army launched an invasion of Georgia in 1921, largely engineered by native son Joseph Stalin, who would go on to lead the Soviet Union from 1922 until his death in 1953. In the Second World War, hundreds of thousands of Georgians fought against Nazi Germany and suffered horrific losses.

During the glasnost, or openness, era that began in the mid-1980s, Georgia developed an autonomy movement that would capture its people’s imagination. The country declared independence shortly before the collapse of the Soviet Union in 1991.

Since then, tensions between Georgia and Russia have often turned violent. Georgia underwent a civil war in the early 1990s that had some Russian involvement. Over the years, there were numerous clashes between Georgians and Russian-backed separatists in South Ossetia and Abkhazia.

The last vestiges of its Soviet era vanished during the Rose Revolution of 2002, when Georgian president Eduard Shevardnadze, who was the Soviet Union’s minister of foreign affairs from 1985 to 1991, was ousted – even though he did not oppose pursuing tighter relations with the West. After that, Georgia ramped up its pro-West strategy, boosting its trade links with Europe, teaching children English at the expense of Russian and forming a relationship with NATO that has deepened by the year (in the past week, NATO has held extensive exercises with the Georgian military).

None of this sat well with Russian President Vladimir Putin. The breaking point came in the summer of 2008, triggering the short, exceedingly violent war that would give Russia full control of about 20 per cent of Georgian soil. Since then relations have been bitter, all the more so as Georgia has cozied up to NATO and the EU. Its NATO membership goal is actually written into the constitution.

Mr. Khelashvili, of the foreign relations committee, says that, in a sense, the war in Ukraine poses nothing new to his country. “We have been living in fear of Russia for more than 30 years,” he said. “Our security predicament has not changed. We have never been fully in control of our territory.”

But Georgian security analysts and other MPs argue that the country’s security and economic threats have intensified dramatically since Feb. 24, when Russia invaded Ukraine. Some think that if Russia conquers Ukraine, then Georgia, and possibly Moldova, will be next on Mr. Putin’s hit list.

“I believe that if Russia achieves its goals in Ukraine, or even part of its goals, we will be the next target,” said Giorgi Bilanishvili, a research fellow at the Georgian Foundation for Strategic and International Studies, a think tank. “Putin does not think Ukraine is a sovereign country. He thinks the same about Georgia.”

Shorena Lortkipanidze, the founder of Georgia’s Civil Council on Defence and Security, agrees. “We have no protection,” she said. “We have a northern state [Russia] that still thinks Georgia is part of Russia … And Russia does not want a democratic Georgia.”

Gia Japaridize, a professor of international relations at the University of Georgia and a former diplomat, said he believes the “only solution” for Georgia is full NATO membership, which would allow it to invoke Article 5 in the event of a Russian attack (the clause in the North Atlantic Treaty deems an attack on any NATO member to be an attack on all of them). But Georgia’s NATO membership is still theoretical – there is no timeline.

Georgia’s government, led by Irakli Garibashvili of the social democratic Georgian Dream party, is being exceedingly careful on the geopolitical and military files for fear of provoking a fight with Russia. In early February, when it became apparent to many Georgians that Russia was intent on conquering Ukraine – they were speaking from experience – Georgia’s parliament passed a resolution in support of Ukraine and its sovereignty. But the resolution did not condemn Moscow for threatening Ukraine with its massive buildup of troops along the border. Russia was not even mentioned in the text.

After the war started, Georgia did not join the West in rolling out increasingly aggressive sanctions against Russia, triggering outrage in Kyiv, which recalled its ambassador in Tbilisi.

About 20 per cent of Georgia’s trade is with Russia and its client state Belarus. Georgia sells those two countries ferroalloys, agricultural products and wine; Russia sells Georgia wheat, cooking oils, and crude oil and natural gas. If that two-way trade were to vanish or even slow, the Georgian economy would suffer.

Various senior politicians have said the government’s goal is to keep peace with Russia and maintain economic stability.

Still, more than a few MPs fear the worst. Levan Ioseliani, the vice-speaker of parliament and a member of Mr. Elisashvili’s pro-West Citizens Party, is calling for NATO to impose a no-fly zone over Georgia to prevent Russian military planes from entering its airspace. “Everyone fears a war in Georgia,” he said. “We all fear that the Russian Federation will continue here what they are doing in Ukraine.”

There is a different, less violent – but still losing – scenario for Georgia, Mr. Bilanishvili said. In a word, he said, it would involve Russian “blackmail.”

His theory is that if Mr. Putin achieves his goal of controlling all of Ukraine or large parts of it, he would be in a strong position to threaten Georgia with invasion, too, unless it were to meet his demands. He could, for example, demand official neutrality from Georgia, meaning the government would have to ditch its plans to join NATO or the EU.

Already, Russia is engaged in a propaganda campaign in Georgia to boost its political leverage in the small country.

Last summer, more than half a year before the start of the Ukraine war, thousands of protesters filled vast Freedom Square in central Tbilisi, close to the parliament buildings. The protest was against the city’s annual Gay Pride parade. Gay activists and journalists were attacked by the far-right mob, and one TV journalist later died of his wounds.

The protests included an anti-EU element, with EU flags on the parliament buildings torn down and burned (parliament later passed a law banning the defacement of flags of the EU, NATO and their member states). The protests were almost certainly influenced by pro-Russian interests.

More recently, a pro-Russian conservative party registered in Georgia. It has yet to field candidates in an election but is opening representative offices in the country. Both Mr. Bilanishvili and Ms. Lortkipanidze assume the party receives funding from Russia.

“Pro-Russian propaganda has been very active in Russia,” Mr. Bilanishvili said. “My main worry is the internal stability of Georgia, and our government may not be capable of resisting the demands of Russia.”

Harold Hongju Koh is one of the lawyers representing Ukraine at the International Court of Justice, which ordered Russia to stop the war, without result. He spoke with The Decibel about their arguments and the challenge of enforcing international law in a case such as this. Subscribe for more episodes.

The Globe reports from Europe and beyond

Ukraine: Inside the city of Mykolaiv, where death, destruction and chaos are the norm

Belgium: How NATO is helping Ukraine fend off an onslaught of Russian cyberattacks