Germany’s president called Thursday for his countrymen to stand up to extremism and nationalism, warning that hatred and a desire for authoritarianism are on the rise again in Europe, including in his country.

Speaking at a ceremony marking the 75th anniversary of the bombing of Dresden ‘s bombing by allied forces at the end of the Second World War, Frank-Walter Steinmeier said it was important to recall who had started the devastating conflict.

The man-made firestorm, vividly captured by American author Kurt Vonnegut in his book Slaughterhouse Five, and the destruction of large parts of the baroque eastern German city have become a rallying point for those seeking to portray Germans as victims in the war.

“It was Germans who began this gruesome war,” Steinmeier said.

“We won’t forget the German guilt,” he added. “And we stand by the responsibility that remains.”

Still, Steinmeier said those who perished in the Dresden bombings deserved to be commemorated, just like those killed by Nazi Germany’s aerial bombings in Guernica, Coventry, Naples, Le Havre and the Polish town of Wielun, where 1,200 people were killed by the Luftwaffe in the first hours of the Second World War.

Historians say the Feb. 13-15, 1945, bombardment of Dresden by American and British planes killed up to 25,000 people. That is comparable to the death toll in other large German cities.

German nationalists have for decades promoted the myth that as many as half a million civilians were killed in Dresden. Most recently the idea has been taken up by members of the nationalist Alternative for Germany party, which has grown into a significant force in German politics since its founding seven years ago.

The party, which goes by the German acronym AfD, has moved steadily to the right over the years. Bjoern Hoecke, a regional AfD leader who once called for a “180-degree turn” in the way Germany commemorates its past, was once considered a fringe figure but now represents the party’s core.

AfD’s co-chairman, Tino Chrupalla, recently stated that the bombing of Dresden cost “about 100,000 lives.” While such claims are dismissed by experts and condemned as revisionism by centrist parties, they reflect Alternative for Germany’s tactic of gaining attention by breaking taboos.

Last week, the far-right party threw German politics into turmoil by unexpectedly backing a centrist candidate as governor in Thuringia state. The fumbled reaction to the situation by two other political parties – including Chancellor Angela Merkel’s centre-right Christian Democrats – triggered widespread outrage and numerous resignations, including that of Merkel’s heir apparent.

Steinmeier alluded to the incident in his Dresden speech, warning that “if elected lawmakers make the parliaments in which they sit look foolish and ridiculous, then that’s an attempt to destroy democracy from within.”

“It’s not enough for democrats to shudder and turn away in disgust,” he said. “We have to reject all forms of hatred and incitement, speak out against insults and counter prejudice.”

“We all, each in their own way, carry a responsibility for the way we live together and for the democracy in our country,” said Steinmeier. “That, too, is a lesson from the wrong track Germany took, which led to the destruction of Dresden.”

His words were echoed by Marco Wanderwitz, a lawmaker from Merkel’s Christian Democrats who was recently named as the centre-right party’s point-man in eastern Germany.

Wanderwitz said other parties had walked into the AfD’s “trap” in Thuringia and that there could be no question of co-operating with the far right in the future.

“We have to keep countering their claims, explain the context and say when taboos have been broken,” he told The Associated Press.

After his speech, Steinmeier joined the Duke of Kent, a cousin of Britain’s Queen Elizabeth II, and thousands of Dresdeners to form a human peace chain in a gesture of reconciliation and to commemorate the victims of Nazi atrocities and mass bombings by all sides during the Second World War.

Among those taking part as the chain formed in icy rain near the rebuilt Frauenkirche were Gisela Hahn and Gottfried Koehler.

“We’ve had 75 years of peace in Europe,” said Koehler, who recalled seeing Dresden burning from afar as a small child. “That’s why we’re here.”

Germany’s Social Democrats say they will quit coalition if Merkel forced out
February 12, 2020 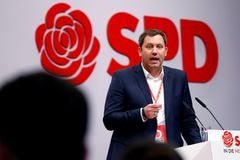 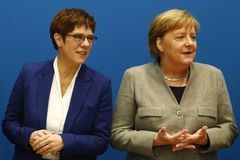 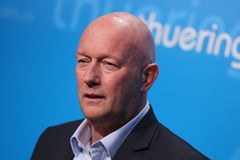