The board of the United Nations’ atomic watchdog agency on Friday adopted a resolution calling for Iran to provide inspectors access to sites where the country is thought to have stored or used undeclared nuclear material, the Russian representative said.

Mikhail Ulyanov, Russia’s ambassador to international organizations in Vienna, said on Twitter that his country and China had voted against the resolution that Germany, France and Britain proposed at a meeting of the International Atomic Energy Agency board “We believe that the resolution can be counterproductive,” Ulyanov said, while also “stressing the need for Tehran and IAEA to settle this problem without delay.”

Activities at the sites are thought to have been from the early 2000s, before Iran signed the 2015 nuclear deal with world powers. Iran maintains the International Atomic Energy Agency has no legal basis to inspect them.

The agency has said that Iran continues to provide access to sites covered by the nuclear deal, known as the Joint Comprehensive Plan of Action, or JCPOA.

Iran’s representative to the IAEA, Kazem Gharibabadi, said his country rejected the resolution.

“We do not consider this resolution acceptable at all,” he said. “This resolution cannot create any legal obligation for the Islamic Republic of Iran in co-operation with the International Atomic Energy Agency to grant the two accesses.”

Since the United States withdrew unilaterally from the deal in 2018, the other signatories – Germany, France, Britain, Russia and China – have been struggling to save it.

Meanwhile, Iran has been violating its restrictions, including the amount of uranium it can enrich and the purity of enrichment, to try to pressure those countries to provide additional economic relief to offset American sanctions.

It is not clear what effect the new resolution will have on the JCPOA, but Iran threatened unspecified consequences.

“The Islamic Republic of Iran will take appropriate action and respond to this resolution,” Gharibabadi said.

China’s ambassador to international organizations, Wang Qun, told board members he was “deeply concerned” about both Grossi’s decision to openly express concerns about being denied access and the resolution that was passed.

He said, according to a copy of his statement provided to The Associated Press, that it could “set forth a process, under the current circumstances, that may bring the Iranian nuclear issue back to a crossroad full of uncertainties again.”

German Foreign Ministry spokesman Christofer Burger said the resolution passed with a “solid majority” of over two-thirds. The resolution is meant to prompt “Iran to grant the access the IAEA has sought to nondeclared sites and co-operate constructively on clearing up undeclared uranium material,” he said.

The foreign ministers of Germany, France and Britain met later in the day in Berlin for talks on Iran and other issues.

The American representative, Jackie Wolcott, said the U.S. had supported the resolution and that the ball was now in Iran’s court.

“The fact of the matter is this is entirely Iran’s decision,” she said in a conference call with reporters. “They could fix this overnight if they would just decide to comply with their obligations with the IAEA.” 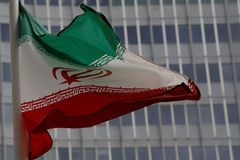 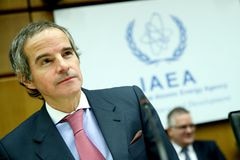