With a midday tweet on Thursday, President Donald Trump voiced his support of Israeli control over the Golan Heights, reversing decades of American policy.

The move thrust the Golan Heights – a fertile plateau beside the Sea of Galilee that has been one of Israel’s quieter frontiers for a half-century – back into international headlines.

The area covers under 500 square miles and offers expansive views over Syria and Israel, giving it strategic military importance. It was seized by Israel from Syria during the Six-Day War of 1967, and since then, it has been claimed by both countries.

‘The jungle is back.’ With his Golan Heights tweet, Trump will embolden the annexation agendas of the world’s strongmen

How did it come under Israeli control?

The Six-Day War of June 1967 ended in decisive victories for Israel, which seized the Golan Heights from Syria. Syrian forces began a failed attempt to reclaim the territory in 1973. That war ended with an armistice that left most of the Golan Heights in Israeli hands. In 1981, Israel passed a law that effectively annexed it.

But that move was never recognized internationally, and a United Nations Security Council resolution that year said that “the Israeli decision to impose its laws, jurisdiction and administration in the occupied Syrian Golan Heights is null and void and without international legal effect.”

There have been halting negotiations over the Golan Heights, but in 2011 the conflict in Syria introduced new tensions to the area and effectively shut down those efforts.

The Golan Heights is not densely populated. According to some estimates, there are around 50,000 people, with Israeli Jewish settlers making up nearly half. The rest are mostly people of Syrian ancestry who are Druze, a religion that has been described as an offshoot of Ismaili Islam.

Druze residents of the Golan Heights have largely resisted obtaining Israeli citizenship and have maintained a strong connection to Syria for decades. Despite the proximity — megaphones and binoculars have connected people in the Golan Heights with friends across the border — that connection has been tested by the devastating conflict in Syria.

But overall, life in the Golan Heights has been relatively tranquil compared with other places on Israel’s frontiers.

What changed on Thursday?

For decades, the United Nations and the United States refused to recognize Israel’s seizure of the Golan Heights and the West Bank in 1967, arguing that the contours of Israel must be negotiated diplomatically.

But Trump tweeted on Thursday that “it is time for the United States to fully recognize Israel’s Sovereignty over the Golan Heights,” adding that it was of critical importance to Israel and stability in the Middle East.

His tweet came after pressure from Prime Minister Benjamin Netanyahu of Israel, and it could help shore up support for Netanyahu in the embattled leader’s bid for a fifth term in hotly contested elections scheduled for April 9.

But in an interview on Thursday afternoon with Fox Business Network, Trump said that he had considered recognizing the Golan Heights as part of Israel “for a long time” and that his decision was not meant to boost Netanyahu’s electoral chances.

What is the broader context?

Trump’s tweet was not entirely out of the blue. He has already recognized Jerusalem as the capital of Israel, moved the U.S. Embassy there from Tel Aviv and cut aid to Palestinian refugees. In November the United States voted for the first time against a symbolic resolution that the U.N. issues annually condemning Israel’s presence in the Golan Heights.

Since 2011, Israeli officials have expressed relief that the Golan Heights has acted as a sort of buffer for the conflict in Syria, whose president, Bashar Assad, is supported by Iran.

“All of you can imagine what would have happened if Israel were not in the Golan,“ Netanyahu said Wednesday during a meeting with Secretary of State Mike Pompeo. “We would have Iran on the shores of the Sea of Galilee.”

Syria’s ambassador to the U.N. in Geneva, Hussam Edin Aala, warned Wednesday against Israel’s “malicious attempts to exploit the situation and the latest developments in Syria and the region to consolidate the occupation” of the Golan Heights, the Syrian state news agency, SANA, reported. But critics of Assad have noted that although he and his government have frequently talked about “liberating” the Golan Heights, they have taken little action to do so in decades.

On its own, Trump’s tweet is not likely to change things in the Golan Heights. There is no negotiation underway on the area’s status, nor any expectation that Israel is going to withdraw from it.

But the announcement was the latest in a series of steps under the Trump administration that have reshaped the United States’ role in conflicts between Israel and its Arab neighbors, to the benefit of Israel’s right-wing government. 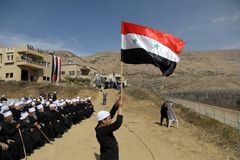