Turkish President Recep Tayyip Erdogan said Turkey would press ahead with its search for oil and gas in the disputed waters until Aug. 23 as planned. But after a phone call with Germany’s leader, he signalled that Ankara and Berlin had agreed to a “softening” of positions after that date.

There was no indication from Athens whether it had been consulted, or agreed, on the matter.

Mr. Erdogan warned, however, that Turkey would strongly respond to any “harassment” of its vessels by Greece. Turkey has a research ship accompanied by two warships prospecting between Cyprus and the Greek island of Crete, and Greece deployed its own naval vessels to the area.

Mr. Dendias said he and Mr. Pompeo had “an open explanation of what’s happening.”

“I hope there will be no conflict if everybody keeps his mind and everybody acts according to international law, international law of the sea,” the minister said, referring to Greece’s tensions with Turkey. “Everything can be resolved, but this is a question that you have to put to the Turks.”

The State Department said Mr. Pompeo and Mr. Dendias discussed “the strong U.S.-Greece bilateral relationship and the urgent need to reduce tensions in the Eastern Mediterranean.”

The emergency EU meeting, which has the political crisis in Belarus as the main item on the agenda, was being held by video conference.

German Foreign Minister Heiko Maas, whose country holds the rotating EU presidency, said ahead of the talks that “the provocations” that are happening in the eastern Mediterranean “can’t continue.”

“Nor can the Turkish drilling,” he said. “We are working toward a direct dialogue between the parties that would contribute to finding a solution for this issue.” Mr. Maas added that there should be no drilling during any negotiations.

Although the meeting was not expected to produce any decisions, Athens is seeking backing from its partners in the 27-country bloc and a commitment for potential EU sanctions in the dispute with Turkey, which comes weeks after a similar confrontation was defused with German Chancellor Angela Merkel’s intercession.

Ahead of his meeting with Greece’s Mr. Dendias, Austria’s Mr. Schallenberg said he was “very concerned about the dangerous and alarming situation, which we believe could escalate.”

“Actions taken by certain states in the eastern Mediterranean … should lead the European Union to re-evaluate its relations with Turkey,” he said.

So far, only France has responded, pledging to boost its military presence in the eastern Mediterranean and sending two warships to the area Thursday for joint drills with the Greek navy. France also deployed two fighter planes to Crete.

French relations with Turkey, which is not an EU member, are already bad over Ankara’s involvement in Libya’s civil war.

Relations between historic regional rivals – and nominal NATO allies – Greece and Turkey have hit a more than two-decade low after Turkey sent a seismic research ship, escorted by warships, to prospect Monday for potential offshore oil and gas in waters Athens claims as its own.

Greece placed its armed forces on high alert and sent warships to the spot, south of Turkey between Crete and the island country of Cyprus, demanding the vessels’ withdrawal. Turkey claims it has every right to prospect in the area, as well as in neighbouring waters Cyprus considers its own, after the discovery of large offshore gas deposits in recent years off Israel, Egypt and Cyprus.

The governments in Athens and Ankara have spoken of the need for peaceful dialogue, although it’s unclear how that could happen with each insisting that they will defend their rights. Meanwhile, with the warships dancing about each other in a relatively small patch of the eastern Mediterranean, there’s a real danger of rapid escalation in the case of an accidental collision or hostile act.

Mr. Erdogan said that during his call with Ms. Merkel late Thursday, the German Chancellor requested a “softening of the issue and to proceed in a more protective understanding.”

“We agreed,” Mr. Erdogan told reporters, adding that he hoped the Greek leadership would “reach the same point.”

Mr. Erdogan added: “We will not leave unanswered the slightest attack against our civilian ships.”

The Turkish leader also said his country had responded to an incident involving the Turkish research ship Oruc Reis.

Greek officials said they were unaware of any incident Thursday, and the Foreign Ministry said Mr. Dendias would brief his EU partners from Vienna on “the true events during recent days concerning operational incidents in the area.”

In Switzerland meanwhile, Turkish Foreign Minister Mevlut Cavusoglu said Turkey does not seek an escalation and called on the EU to convince Greece to act with “reason.” He also accused France of engaging in “bullying” in the eastern Mediterranean.

“Instead of indulging Greece and giving unconditional support, the EU should invite [Athens] to act with reason,” Mr. Cavusoglu told reporters during a news conference with his Swiss counterpart. 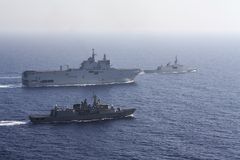 Turkey vows to press ahead with search for oil, gas in Mediterranean Sea amid tensions with Greece
August 11, 2020 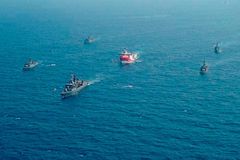 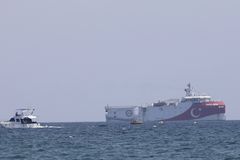