Demonstrators protested for a fourth consecutive day Thursday on the eastern Greek islands of Lesbos and Chios against government plans to build new migrant detention centres, while island mayors met with the prime minister in Athens in an effort to resolve growing tension.

The protests come amid growing anger and occasional violence on islands that are the main entry point for tens of thousands of people seeking better lives in the European Union.

Shops and services were shut on Lesbos as workers extended an initial 24-hour strike into a second day as part of the protests.

The mayors of Lesbos, Chios and the nearby island of Samos met with Prime Minister Kyriakos Mitsotakis Thursday evening. The mayors and the prime minister agreed on “the need to immediately ease overcrowding on the islands,” the prime minister’s office said after the meeting.

Mitsotakis’ office announced he would visit all three islands, starting in coming days with Samos whose migrant camp has the most severe overcrowding problem.

On Wednesday, protests degenerated into violence with hundreds of demonstrators armed wit petrol bombs, shotguns and stones attacking police guarding the building sites of planned migrant detention camps on Chios and Lesbos. A crowd also laid siege for hours to a Lesbos army camp where riot squads were staying.

Officials have said 43 police officers were injured in violence in Lesbos, and another nine in Chios, where a mob burst into a hotel being used by riot police and beat officers resting in their rooms.

The government has said it will pull out many of the riot police deployed to the islands earlier this week. But it has insisted its plan to tackle migration, including building new detention centres, speeding up asylum procedures and deportations and beefing up border controls, will go ahead.

“It is the only plan that can be implemented,” Mitsotakis said in opening remarks during a Cabinet meeting Thursday morning.

The prime minister condemned attacks against police officers, saying those who participated in the violence “will be located and will answer for their actions.”

“At the same time however, incidents of excessive violence by the police will be investigated,” Mitsotakis said. “Serious accusations have been made, we have a duty to investigate them.”

Mitsotakis said he had ordered a “significant increase” in the number of patrol boats and patrols given what he called an increased public health risk from the new coronavirus, as new arrivals include people from Iran, where cases of the virus have increased significantly in recent days, and people who had crossed through Afghanistan.

Greece’s eastern Aegean Sea islands have been the main entry point into the European Union for tens of thousands of people fleeing conflict and poverty in the Middle East, Africa and Asia. Under a 2016 deal between the EU and Turkey, new arrivals must stay on the islands pending deportation back to Turkey until their asylum applications are processed.

Long delays in the asylum process and increased migrant flows have led to severe overcrowding in the island camps, which are several times over capacity.

Island residents have demanded that all migrants be moved to the mainland, and vehemently object to new camps being built in their areas.a 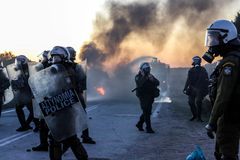 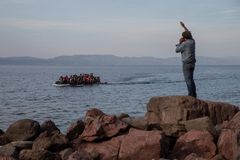 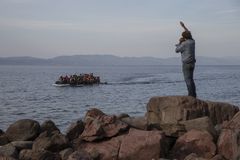