Mr. Moïse also said he was holding closed-door talks with civil society groups and the private sector, as well as radical and moderate members of the opposition in a bid to break political gridlock by creating a government of unity.

However the 51-year-old President – who faces widespread anger over galloping inflation, rampant insecurity and allegations of corruption – would not say with whom he was talking. Haiti’s leading opposition parties have for months said the time for dialogue is over.

“We are in the midst of a humanitarian crisis,” Mr. Moïse said in the interview on Friday in the garden of his home in the hillside suburb of Petionville, overlooking Port-au-Prince and the Caribbean Sea. “We need international support to get through this crisis.”

But aid organizations are struggling to provide relief because of protester barricades blocking roads, as well as gang violence and other crime. The WFP has said it is ready to launch air and maritime transport operations, but needs to raise US$2.9-million to do so.

The opposition accuses the United States, which has frequently determined the fate of Haitian politics, of propping up Mr. Moïse and ignoring the people.

The U.S. government has urged all stakeholders to work toward an inclusive dialogue without preconditions.

Fuel shortages in August sparked protests that have morphed into a fierce campaign against Mr. Moïse that has shuttered businesses and schools and galvanized the political opposition.

While turnout in what has become Haiti’s longest wave of demonstrations for years has weakened somewhat during the past two weeks, the opposition is calling for a nationwide protest on Monday, a bank holiday that commemorates a major battle of Haiti’s independence war.

Mr. Moïse said he started meeting “lots of people” behind closed doors a week and a half ago, rather than continuing to meet in public.

Two of the most prominent opposition leaders, André Michel and Moïse Jean Charles, as well as the spokesman of the Episcopal Conference Father Loudeger Mazile, told Reuters they were not participating in the conversations and did not know of any significant figure or group that was.

Haiti has not had a government since March as Parliament is required to ratify the President’s choice of prime minister and the minority opposition has blocked such a vote from taking place.

The opposition accuses Mr. Moïse’s ruling alliance of seeking to replace the previous prime minister because he was too keen on investigating the embezzlement of Venezuelan aid funds that could have sullied its members, including the president himself. Mr. Moïse denies any wrongdoing.

The lack of a government in turn is preventing Haiti from accessing hundreds of millions of dollars in international aid funds, as well as loans from the World Bank, Inter-American Bank and others earmarked for it.

From next year, it will no longer have a Parliament either. The mandates of deputies and most senators ends in January and Haiti failed to hold legislative elections in October as required by the constitution.

“We don’t want to govern the country without democratic institutions,” Mr. Moïse said. “But unfortunately, it looks like we are headed in that direction and that’s why today we are working on finding a political accord.”

He reiterated that he had no intention of resigning or holding early elections.

Instead, he said, he wanted to carry out reforms including changing the constitution to strengthen the president’s powers so he is not held hostage by Parliament.

The presidency is weak under Haiti’s current constitution as it was written in the wake of the dynastic dictatorships of François (Papa Doc) Duvalier and his son Jean-Claude (Baby Doc) Duvalier.

On the economic front, Mr. Moïse said he hopes to implement stronger mechanisms to avoid tax and customs evasion to help reduce the ballooning budgetary deficit. This could in turn help bring down inflation of around 20 per cent.

On the investigation into the alleged embezzlement of Venezuelan aid funds, the President said his acting government was pressing for an update.

Mr. Moïse’s opponents, who say he disappeared from public sight at the start of the current crisis, criticize it as too little too late, nearly three years into his five-year mandate. 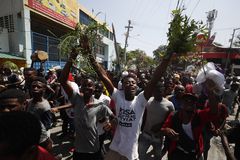 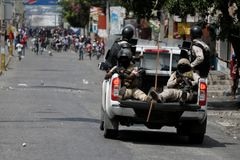 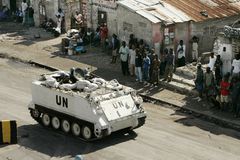