Hospital administrators and health care experts warned desperately Wednesday that parts of the United States are on the verge of becoming overwhelmed by a resurgence of the coronavirus, lamenting that politicians and a tired-of-being-cooped-up public are letting a disaster unfold.

The U.S. recorded a one-day total of 34,700 new COVID-19 cases, just short of the country’s late-April peak of 36,400, according to the count kept by Johns Hopkins University.

While new cases have been declining steadily in early U.S. hot spots such as New York State and New Jersey, several other states set single-day case records this week, including Arizona, California, Mississippi, Nevada and Texas. Some of them also broke hospitalization records, as did North Carolina and South Carolina. 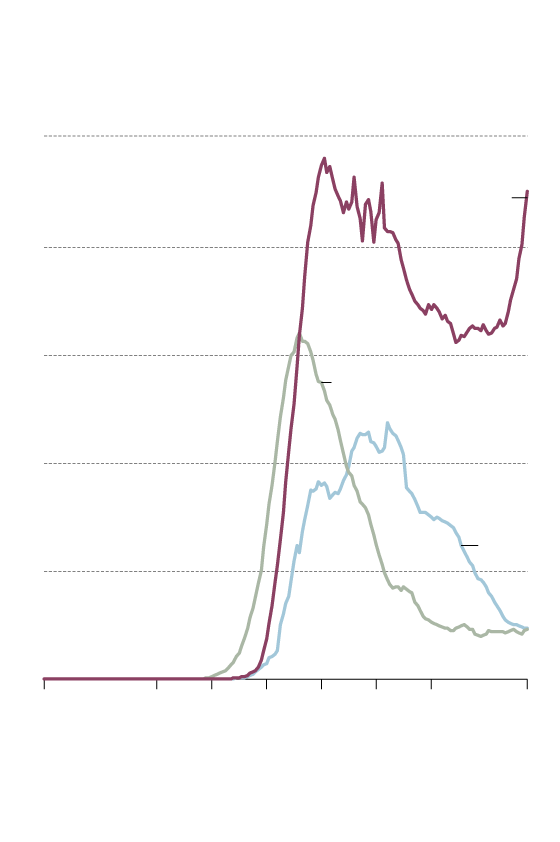 SOURCE: our world in data (European 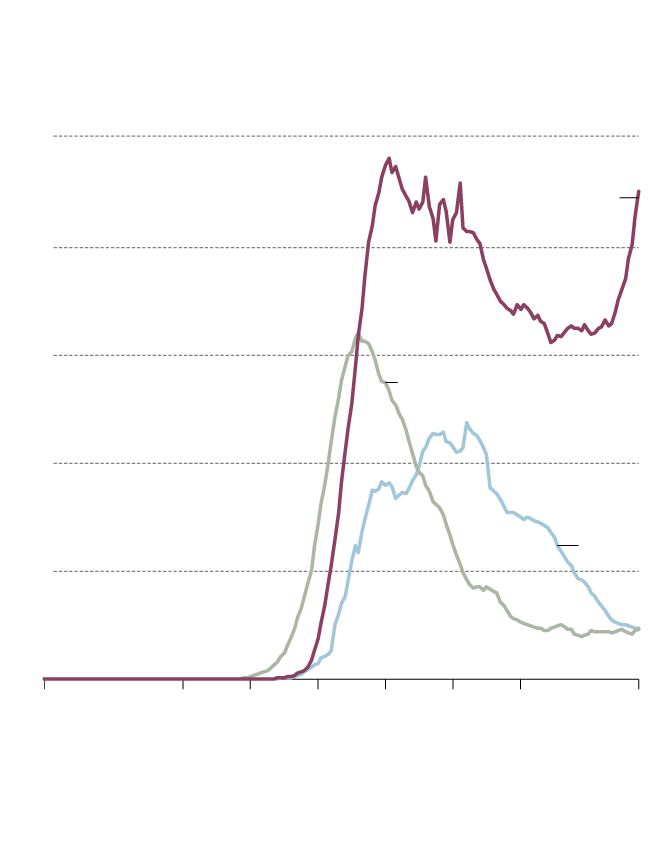 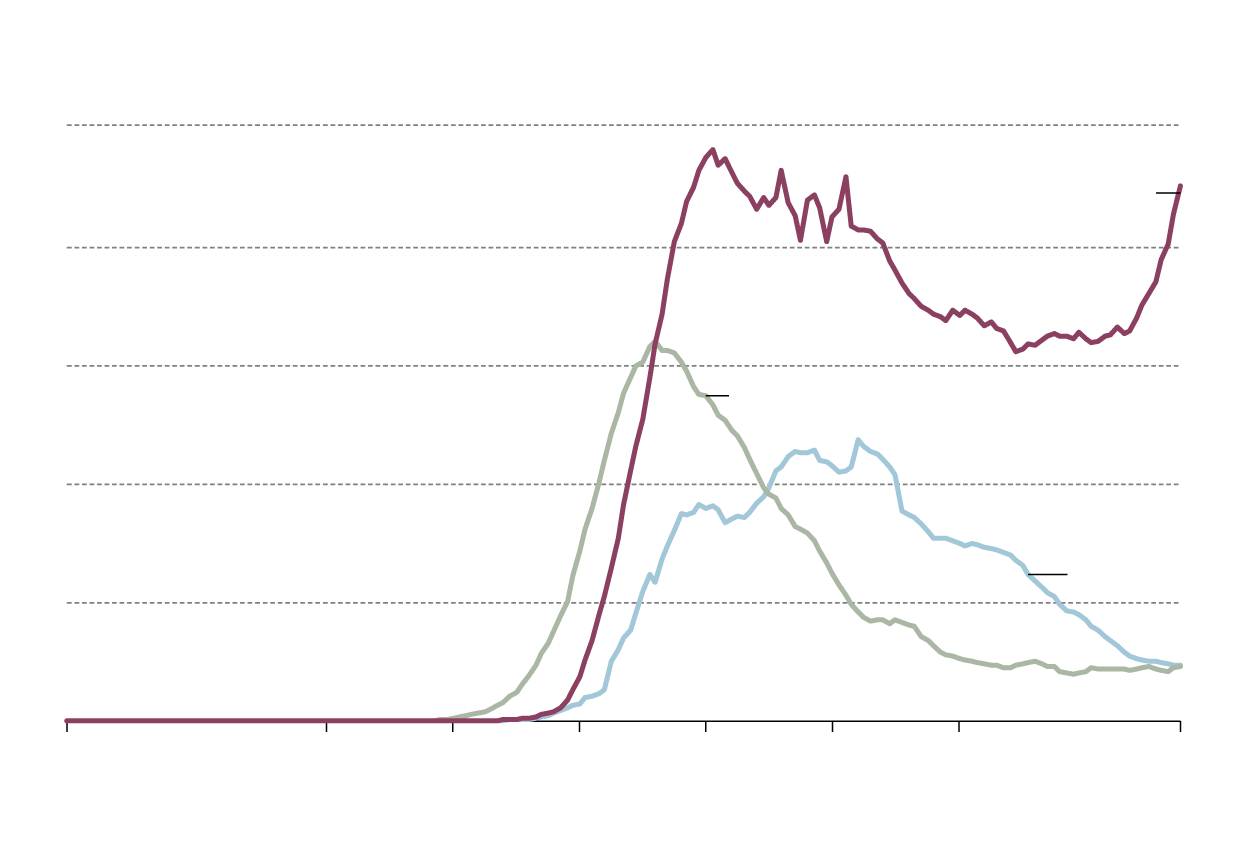 JOHN SOPINSKI/THE GLOBE AND MAIL, SOURCE: our world in data

“People got complacent,” said Marc Boom, chief executive of the Houston Methodist hospital system. “And it’s coming back and biting us, quite frankly.”

The stock market slid sharply Wednesday as the virus’s resurgence clouded investors’ hopes for a relatively quick economic turnaround. The virus in the U.S. has been blamed for more than 120,000 deaths – the highest toll in the world – and more than 2.3 million confirmed infections.

Florida’s single-day count of new confirmed cases surged Wednesday to 5,500, a 25-per-cent jump from the record set last week and triple the level from just two weeks ago.

In Texas, which began lifting its shutdowns on May 1, hospitalizations have doubled and new cases have tripled in two weeks.

At Houston Methodist’s eight Texas hospitals, the COVID-19 patient count has tripled in the past month, to 312. About 20 per cent of the coronavirus tests the hospitals conduct now come back positive, compared with roughly 2 per cent to 4 per cent in mid-May.

If the trends don’t change, the 2,000-bed hospital chain could have 600 coronavirus patients in the next three weeks and could be forced to cancel non-essential surgeries, Dr. Boom said.

“We need everybody to behave perfectly and work together perfectly” to slow the infection rate, Dr. Boom said. “When I look at a restaurant or a business where people … are not following the guidelines, where people are just throwing caution to the wind, it makes me angry.”

In Arizona, cases will probably exceed statewide hospital bed capacity within the next several weeks if the trend continues, said Joseph Gerald, a University of Arizona public health policy professor.

“We are in deep trouble,” Dr. Gerald said, urging the state to impose new restrictions on businesses, which Governor Doug Ducey has refused to do. Without such steps, Dr. Gerald said, the death toll will reach “unheard of” levels.

Infectious-disease expert Peter Hotez said he worries that the states will squander what time they have to head off a much larger crisis.

“We’re still talking about subtlety, still arguing whether or not we should wear masks, and still not understanding that a vaccine is not going to rescue us,” said Dr. Hotez, of the Baylor College of Medicine in Texas.

Texas Governor Greg Abbott initially barred local officials from fining or penalizing anyone for not wearing a mask as the state reopened. After cases began spiking, he said last week that cities and counties could allow businesses to require masks. Both Mr. Abbott and Mr. Ducey are Republicans.

In Florida, several counties and cities have recently started requiring masks in public places and cracking down on businesses that don’t enforce physical-distancing rules.

In a sign of the shift in the outbreak, New York State, Connecticut and New Jersey announced they will require visitors from states with high coronavirus infection rates to quarantine themselves for 14 days. That is a turnaround from March, when Florida Governor Ron DeSantis issued such an order for visitors from the New York area, where cases were surging at the time.

Cases are also surging in some other parts of the world. India reported a record daily increase of nearly 16,000 new cases, with an outbreak in the capital city of New Delhi becoming a rising concern. Mexico, where testing rates have been low, also set a record with more than 6,200 new cases.

But China appears to have tamed a new outbreak in Beijing, once again demonstrating its ability to quickly mobilize its vast resources by testing nearly 2.5 million people in 11 days. China on Wednesday reported 12 cases nationwide, down from 22 the day before.

In Europe, countries are both easing and increasing restrictions as the outbreaks evolve. Slovenia reintroduced mandatory use of face masks in public transportation and other enclosed public spaces after cases spiked in recent days, while Belgium said theatres and swimming pools could reopen next month. Infections there have nosedived over the past two months.

In Africa, Africa Centres for Disease Control and Prevention chief John Nkengasong said the outbreak is “picking up speed very quickly,” with a steep increase in cases and deaths as more countries loosen lockdowns. Africa has seen nearly 325,000 cases and more than 8,600 deaths.

Worldwide, more than 9.2 million people have been confirmed infected, and close to a half-million have died, by Johns Hopkins’ count.