Jessie Pang and Sarah Wu
HONG KONG
Reuters
Published May 15, 2020 Updated May 15, 2020
For Subscribers
Comments
Text Size
Please log in to listen to this story. Also available in French and Mandarin. Log In Create Free Account

The Beijing-backed leader of Hong Kong ruled out on Friday an independent inquiry into allegations of police brutality against pro-democracy protesters, though she did accept a watchdog’s recommendations on tear gas and training.

“I disagree and won’t do it,” Carrie Lam said of the demonstrators’ demand for an independent probe, speaking at a news conference against a backdrop of pictures of blazing protests and a banner saying: “The Truth About Hong Kong.”

Months of often violent protests since mid-2019 against China’s control of the former British colony ebbed during the coronavirus crisis, though arrests of activists in recent days have revived frictions.

Demonstrators accuse police of excessive force, while authorities say protesters have been riotous and provocative.

Ms. Lam said an independent inquiry would weaken police powers, though the government will accept recommendations from a police watchdog, the Independent Police Complaints Council (IPCC).

In its long-awaited, 999-page report, the Ms. Lam-appointed IPCC on Friday called for a review of guidelines on use of tear gas and public order training for police.

The report said police acted within guidelines though there was room for improvement. Accusations of police brutality must not be used as “a weapon of political protest,” the IPCC added.

On one of the most controversial episodes, the IPCC said it did not find evidence of police collusion with gang members during a July 21 mob attack in Yuen Long district.

The report did, however, identify deficiencies in police deployment during the incident, when a mob of white-shirted men beat protesters and others with sticks and poles.

The Yuen Long attack intensified a backlash against police who some accused of deliberately responding slowly.

“The report has turned a blind eye to disproportional police brutality,” pro-democracy lawmaker Fernando Cheung said. “This report has eliminated what little credibility is left of the IPCC.”

Another lawmaker Kenneth Leung, a former member of the IPCC, said many recommendations “are really piecemeal, superficial and general” and were insufficient to resolve the issues.

Rights groups including Amnesty International have backed protesters’ complaints over disproportionate police force and the arrest of more than 8,000 people.

Police have repeatedly said they were reactive and restrained in the face of extreme violence. The IPCC report said Hong Kong risked being dragged into an “era of terrorism,” echoing comments by senior Hong Kong and Chinese authorities.

During the most intense clashes, protesters, many clad in black and wearing masks, threw petrol bombs at police and central government offices, stormed the Legislative Council, trashed metro stations and blocked roads.

On the July 1 storming of the Legislative Council, the IPCC said police could have stopped it with stronger barriers.

The protests started as a campaign against a now-shelved extradition bill that would have let criminal suspects be sent to mainland China for trial but evolved into broader calls for greater democracy.

Members of the IPCC, which reviews the work of the Complaints Against Police Office, an internal police department, are appointed by Ms. Lam. In December, five foreign experts quit from advisory roles because of doubts about its independence.

Police handling of protests came under fresh scrutiny at the weekend when officers pepper-sprayed journalists and made some kneel in a cordoned-off area. In a rare move, the police chief said on Tuesday his officers should have acted more professionally. 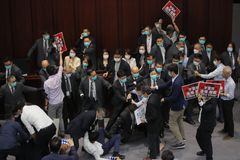 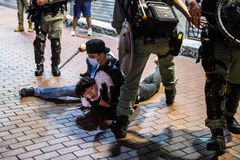