Two days of violence this weekend put a shattering end to a brief interlude of calm in Hong Kong, as police and protesters escalated a confrontation that has now continued for 12 weeks.

The most intense episode began as dusk fell Sunday, when an angry crowd faced off for nearly an hour with riot police in the shadow of a Tsuen Wan district shopping mall.

The crowd hurled bricks, Molotov cocktails and metal rods, ducking behind barricades and umbrellas as police responded with a hail of tear gas, pepper pellets, rubber bullets and bean bag rounds. But the crowd – made up of hard-line elements of a pro-democracy protest, equipped with gas masks, protective eyewear and helmets – held its ground, withstanding what have become familiar police armaments in a long summer of unrest in this Asian financial centre.

As darkness fell, police responded with a new show of force as they sought to clear an increasingly violent confrontation, deploying water cannons for the first time. As angry street battles continued late into the night through other parts of the city, six officers under attack from protesters drew their pistols, and one fired a single shot into the air. Protesters, who had avoided damaging private property, vandalized several shops.

The hostilities capped a weekend of skirmishes, renewing worries that a summer that began with millions marching in peaceful demonstrations will end in sorrow and bloodshed. Fifteen police were injured Sunday on the 12th weekend of protests, and 36 protesters arrested, including one 12-year-old.

“The escalating illegal and violent acts of radical protesters are not only outrageous, they also push Hong Kong to the verge of a very dangerous situation,” a Hong Kong government spokesman said in a statement. Some protesters trampled a Chinese flag, an act the spokesman said “challenges the national authority and allegedly violates the National Flag and National Emblem Ordinance.”

Protesters estimate roughly two dozen were injured on the weekend. Volunteer medics said they had treated fractures and people in respiratory distress.

Police have treated protesters “like animals, just beating them,” said Taylor Wong, a student with first-aid training who was among the crowd that took flight when police deployed water cannons.

The use of that technology, which can cause serious injury and even death, struck fear in protesters who, through preparation and fast-moving tactics, have grown increasingly inured to police attempts to quell their demonstrations.

“If there is a first death, it will without doubt be someone in our camp,” protester Michael Wong said.

But he does not intend to back down, he said. “Because we have seen them gradually upgrade the scale of violence over the past two months, we are somewhat used to it. That doesn’t mean we will kneel down before them. We have decided to stand up and keep doing this to tell them nothing can scare us.”

As the violence Sunday unfolded, Hong Kong Chief Executive Carrie Lam wrote on Facebook that she intends to build a new platform for direct and continuous dialogue with the public. Within 14 hours, 44,000 people had left comments on her post, some begging for calm, others demanding action – and still others trading vicious insults.

The protest movement has been organized around a series of demands, including the full withdrawal of a proposed extradition bill, an independent inquiry into police conduct, amnesty for arrested protesters, the revocation of a government characterization of demonstrations as “riots” and the granting of greater democratic freedoms through universal suffrage.

The bill has been shelved and the city’s Independent Police Complaints Council has launched a fact-finding study. But Ms. Lam has refused to bend to other demands, which continue to be the rallying cry for protesters, who have received tacit support for aggressive tactics from a broad cross-section of Hong Kong, including pro-democratic lawmakers.

”At this time I think the tolerance for some level of violence or vandalism seems to be accepted, and more tolerated, by the general public,” said Fernando Cheung, a member of the city’s Legislative Council. On Saturday afternoon, he stood between protesters and police, willing to mediate but nearly certain it would be of little use.“That road has been reduced to almost zero,” he said.

Protesters, meanwhile, have defended their use of more offensive weapons, such as the numerous Molotov cocktails hurled toward police Sunday. Video showed that flaming bottles tossed on Saturday had produced results, said Sam Chan, a protester. “Police officers were scared by that,” he said. “That encouraged us a bit because we know that these tools can work.”

Provoking a more intense police response has become a strategy in itself, with television crews from around the world capturing the clouds of tear gas and police in militaristic dress.

“By staying here and doing this we will successfully let the world see the things they do – and show the world how impotent they look with their weapons as they stand in front of us,” Mr. Chan said. “Because we have grounds for and legitimacy in our demands and action.” 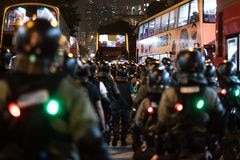 With lights twinkling, a human chain of pro-democracy protesters in Hong Kong steps up pressure on China
August 23, 2019 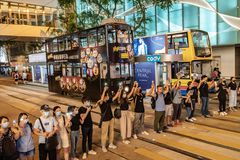 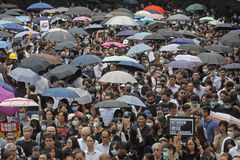