Hong Kong’s new police chief called for the support of all citizens to end social unrest that has disrupted the city for more than five months, while protesters remained trapped by his officers at a university for a third day on Tuesday.

About 200 protesters were still inside the sealed-off Hong Kong Polytechnic University campus, raising fears of bloody clashes with no resolution in sight.

China’s top legislature, commenting on a ruling that said a proposed ban on face masks worn by protesters was unlawful, said Hong Kong courts had no power to rule on the constitutionality of the city’s legislation, according to state media outlet Xinhua.

The former British colony appointed a new head of police, Chris Tang, on Tuesday to oversee the city’s force of more than 30,000 officers. Tang said the force was not able to end the protests alone.

He also said “fake news” was undermining the reputation of Hong Kong police.

Dozens of mask-wearing protesters staged a dramatic escape from the Polytechnic University on Monday night by shimmying down plastic hosing from a bridge and fleeing on waiting motorbikes as police fired projectiles.

Police allowed two prominent figures onto the campus late on Monday to mediate but many protesters refused to leave voluntarily.

The university, in the centre of the bustling Kowloon peninsula, is the last campus still occupied by activists during a week that saw the most intense violence since the anti-government demonstrations escalated more than five months ago.

“There have been so many people who have sacrificed for this,” said a 21-year-old university student, who identified himself as T, who had escaped from the university on Tuesday.

“Some people just don’t give a shit. They just want to sit back and wait for a successful result,” he said.

Demonstrators are angry at what they see as Chinese meddling in Hong Kong’s promised freedoms when the former British colony returned to Chinese rule in 1997. They also say they are responding to excessive use of force by police.

China says it is committed to the “one country, two systems” formula granting Hong Kong autonomy. The city’s police deny accusations of brutality and say they have shown restraint.

Hong Kong leader Carrie Lam said on Tuesday she hoped the university standoff could be resolved peacefully, although she was shocked that campuses had been turned into “weapons factories”.

The number of people demonstrating has fallen in recent weeks but clashes have worsened since early last week, when police shot a protester, a man was set on fire and the city’s financial district was filled with tear gas in the middle of the workday.

Police spokesmen said they fired three live rounds early on Monday morning but no one was hurt.

Protesters have torched buildings and public infrastructure, including a footbridge and toll booths at the city’s Cross Harbour Tunnel linking Hong Kong island to the Kowloon peninsula. The popular tunnel remained shut due to extensive damage, authorities said.

Some train services and many roads across Kowloon remained closed. All schools were shut again on Tuesday, extending a string of closures since last week due to safety concerns.

The city’s hospital authority reported 116 injuries on Monday, including one female in serious condition.

Jasper Tsang, a pro-Beijing politician who is the former head of Hong Kong’s Legislative Council, told Reuters there could be bloodshed if the police entered the Polytechnic University campus by force and would meet strong resistance.

“This is something that we want to avoid,” he said.

Thousands of black-clad protesters have taken to the nearby commercial and tourist district in Tsim Sha Tsui in support of those still inside.

Roaming the streets, many carrying petrol bombs, they have blocked key roads with bricks and bamboo, forcing prime shopping malls, offices and stores to close.

The unrest poses the gravest popular challenge to Chinese President Xi Jinping since he came to power in 2012. Beijing denies accusations of meddling and has accused foreign countries, including Britain and the United States, of inciting trouble.

In Washington, U.S. Secretary of State Mike Pompeo told reporters the United States was “gravely concerned” about the unrest and violence and said the Hong Kong government bore primary responsibility for ensuring a return to calm. 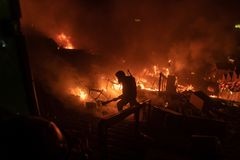 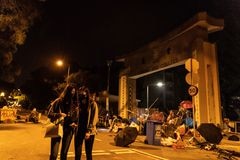