As authorities in Beijing mounted a display of exquisite control with a military parade to mark the 70th anniversary of the People’s Republic of China on Tuesday, demonstrators in Hong Kong prepared to sabotage the image of Chinese peace and stability.

“They cannot control Hong Kong,” protester Eric Cheng said on Sunday night, in the midst of an hours-long battle with police, one that served as a violent preview of what is expected on Tuesday, with police warning about the possibility of suicidal tactics, attacks on gas stations and acts approaching terrorism.

In Beijing, meanwhile, Chinese president Xi Jinping hailed the People’s Republic of China, the Communist Party and “the great Chinese people” in an address from the same rostrum that Mao Zedong used to declare the founding of the new China in 1949. Mr. Xi stressed the importance of national unity, in remarks that emphasized Beijing’s authority over Hong Kong. “Forging ahead we must remain committed to the strategy of peaceful reunification and one country two systems,” he said.

“There is no force that can shake the foundation of this great nation, no force can stop the Chinese people and the Chinese nation forging ahead,” he added, extending congratulations to “patriotic Chinese all across the globe.”

Mr. Xi inspected an immense display of Chinese modern military might, with 15,000 troops, 160 aircraft and 580 pieces of military hardware — tanks, drones, stealth fighters, nuclear ballistic missiles and hypersonic weapons — in what Chinese military experts have called a reflection of the country’s determination to safeguard peaceful development.

“China yesterday is already engraved in the history of mankind. China today is created by hundreds of millions of hard-working Chinese. And China tomorrow will be even more prosperous,” Mr. Xi said. “The Party, the army, and the people of all ethnic groups must be more firmly united, remain true to our original aspiration and keep our mission firmly in mind.”

Hong Kong’s own leaders travelled to Beijing for the 70th anniversary, including chief executive Carrie Lam.

At their home, however, authorities cordoned off a large area around Golden Bauhinia Square ahead of a ceremony to raise the flags of China and Hong Kong, with water cannons at the ready and police boats patrolling the waters nearby. The ceremony in previous years has been open to the public. This year, the sole spectators were an honour guard and a small group of journalists.

No protesters were visible as two helicopters flew past, carrying enormous flags. But local police had already deployed pepper spray against a small group of demonstrators before most in the city had begun breakfast.

“Most of us here are going to ruin their party,” said Daniel Chan, another protester, speaking from behind a black mask. “I want to separate from China,” he said. “What we want is for our future to be peaceful. But not right now.”

Numerous subway stops were closed and riot police dispatched across the city as authorities warned of violence to come.

“We have got intelligence suggesting that some hardcore violent protesters are inciting others, including those with suicidal tendencies, to commit extreme acts – like murdering the police, disguising themselves as police officers to kill others – and settings fires in petrol stations,” Hong Kong police Chief Superintendent John Tse said on Monday.

“There are apparent signs that hardcore violence will escalate,” he said, and “all acts are one step closer to terrorism.”

Protesters, however, say they continue to fight for a series of demands, including an independent inquiry into police conduct and greater democratic freedoms.

For the most committed among them, China’s National Day is a new chance to demand action, after more than three months of protest that have failed to attain the full range of demands.

The first day of October is not only a big day for China, it’s also a big day for those protesting, said one protester on Sunday night, who then fled as a contingent of riot police marched upon his position. The Globe and Mail granted him anonymity, because, like many protesters, he fears retribution for being identified as part of the protests.

“We are all here to send a message to the Hong Kong government that even when you use police force or gangsters – we are not afraid,” said a protester who gave his name only as Jeff.

“We will stand here to fight for our rights.”

For Mr. Cheng, meanwhile, the Chinese anniversary celebration provided an opportunity to send a simple message: “We won’t stop. Even if it’s China’s National Day, we won’t stop. Because that day means nothing to us.” 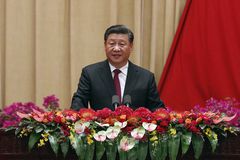 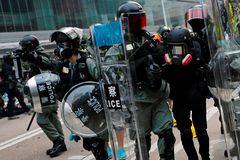 As China celebrates 70 years of the People’s Republic, Xi uses past struggles to brace country for hard times ahead
September 29, 2019 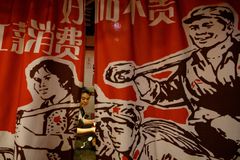