Hospitals in Syria’s overcrowded opposition-held enclave are suspending non-emergency procedures and outpatient services following the detection of the first case of coronavirus, a leading doctor in the area said Friday.

The regional education department also announced it was closing all schools.

The first case of COVID-19, a doctor in the area, was reported on Thursday in Idlib province, the last opposition-held part of Syria in a sliver of land bordering Turkey. The doctor was isolated and the hospital he worked in was shut down. The patients and medical staff he came in contact with have been quarantined.

There have been major concerns of an outbreak in northwestern Syria, an area packed with more than 3 million people, many of them living in tents and encampments, and where health facilities have been devastated by Syria’s long civil war.

The first virus case in Idlib comes as moves by Russia, a major ally of the Syrian government, are threatening to shut down border crossing between the rebel-held enclave and Turkey.

A vote on a resolution that would determine the fate of two border crossings with the enclave, and how long they remain open, is expected later Friday in the UN Security Council. Aid groups and residents of the enclave have warned of dire consequences of limiting or reducing UN cross-border aid to the area, already devastated by displacement and destruction from frequent government attacks.

Russia, which argues that aid should come through Damascus, wants to shut down one of two crossings with Turkey. Western nations are pushing to keep the two existing ones open.

On Friday, hours before the initial Security Council resolution on the aid was to expire, 31 trucks carrying medicine and other supplies crossed into northwestern Syria from Turkey through the crossing Russia wants to shut down. UN agencies have been stocking up aid and relief supplies in the enclave in recent few weeks, a sign of nervousness over continued access.

As the trucks were crossing into Syria, UN Deputy Regional Humanitarian Coordinator Mark Cutts said 5,000 trucks had crossed the border in the last six years, monitored by the United Nations, and expressed hope the aid flow would continue.

“It is crucial that we keep this aid operation going,” he said in a video message. He later told reporters that the first case of COVID-19 in the opposition enclave “is a very big worry for us.”

“This has been a vital lifeline that has kept thousands and thousands of civilians alive for the last few years. This is not the time for us to be reducing the aid operations. We have to increase the access not reduce it,” Cutts said. He said 11 of the trucks were carrying medical aid.

Munzer Khalil, the head of the Idlib health directorate, said the measures to suspend non-emergency procedures and reduce services in Idlib were taken to raise the medical staff’s level of readiness and show the public how serious the matter is. The measures will last at least a week.

The doctor diagnosed with the virus is a 39-year old who works in both Idlib and rural areas in neighbouring Aleppo province. He had seen several patients, so contact tracing and testing is underway, Khalil said.

Fadi Hakim, of the Syrian American Medical Society, said the infected doctor is in isolation in Bab al-Hawa hospital but his symptoms remain mild.

Schools in the area will close as of Saturday until further notice, suggesting a return to remote learning, which had been in place until earlier this month.

Testing has been a major issue in the aid-dependent region, where one lab is in charge of carrying out virus tests. Some testing has been also done through Turkey, which has troops inside the enclave.

In government-held areas in Syria, authorities have recorded 394 cases, including 16 virus-related deaths. In Kurdish-held areas in Syria’s northeast, where testing facilities are limited, about half a dozen cases have been reported.

“People have been lax” when it comes to taking precautions, Khalil said of the area’s residents. “We want to use this period to raise awareness and to show how serious it is and to finish the preparedness of hospitals.” 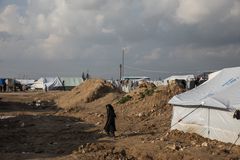 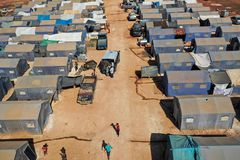 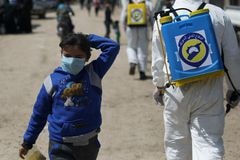