Yemeni officials said armed men shot dead a rebel official Tuesday as he was heading to his office in the capital Sanaa, the most senior Houthi to be killed in more than two years.

Hassan Zaid, who leads the rebel-run Youth and Sports Ministry, died of his wounds immediately after armed men opened fire on his car in the Haddah neighbourhood in central Sanaa, the Houthi rebels said.

The minister’s daughter, who was driving the car, was also wounded, the Houthi-run Interior Ministry said in a statement.

There was no immediate claim of responsibility, but the Iranian-backed Houthis claimed that the Saudi-led coalition fighting them since 2015 was behind the killing. The rebels did not provide evidence.

A spokesman for the coalition was not immediately available for comment.

The killing came amid tight security in Sanaa ahead of the Prophet Muhammad’s birthday on Friday, an event the Houthis use to hold mass celebrations.

Zaid, 66, was the most senior Houthi official killed in Sanaa since the 2017 clashes that led to the killing of former President Ali Abdullah Saleh by the rebels.

He was also the first top official killed since an air strike in 2018 by the Saudi-led coalition killed Saleh al-Samad, president of the Houthi-backed political body.

The Houthi minister was wanted by Saudi Arabia for plotting attacks and in 2017 it offered a $10-million bounty to anyone who provided information leading to his arrest.

He was better known for his 2017 call to send schoolchildren and teachers in Houthi-held areas to front lines to fight against forces of the internationally recognized government.

Yemen plunged into chaos and civil war when the Houthi rebels took over the capital, Sanaa, in 2014 from the internationally recognized government. A Saudi-led coalition allied with the government has been fighting the Houthis since March 2015.

The war in Yemen has spawned the world’s worst humanitarian crisis, leaving millions suffering from food and medical shortages. It has killed over 112,000 people, including fighters and civilians, according to a database project that tracks violence.

The United Nations meanwhile warned Tuesday that at least 98,000 children under five in Yemen could die from severe acute malnutrition.

An analysis by the Food and Agriculture Organization, UNICEF and the World Food Program, revealed that in the worst hit areas in the southern provinces of Abyan, Lahij and Taiz, around one in five children suffer from acute malnutrition.

The analysis also said at least 250,000 pregnant or breastfeeding women need malnutrition treatment. The actual number is likely higher, according to UN experts.

Lise Grande, the UN humanitarian co-ordinator for Yemen, said the latest data showed that acute malnutrition among children hit highest levels not seen since the beginning of Yemen’s civil war.

“We’ve been warning since July that Yemen is on the brink of a catastrophic food security crisis. If the war doesn’t end now, we are nearing an irreversible situation and risk losing an entire generation of Yemen’s young children,” she said.

The UN agencies said more than $50-million are urgently required to “save lives and avert a further worsening situation.” 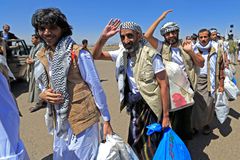 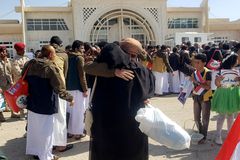