Near the centre of Niagara-on-the-Lake, Ont., sits the 157-year-old Prince of Wales Hotel. Built of red brick, with a carefully restored exterior and manicured flower beds, the building is serene and swanky; passersby pause to take photos, making sure to include the horse and buggy parked outside.

With rooms costing about $500 a night, the Prince is one of three high-end hotels in the picturesque town operated by Lais Hotel Properties Ltd. But while the buildings may emanate a historic vibe, their current ownership can be traced not to some Old Canada family, but a Hong Kong tycoon best known for publishing a racy, muckraking tabloid: Jimmy Lai.

It was that ownership which saw the hotel chain cited in a recent court case in Hong Kong, its parent company named as part of an alleged collusion between the defendants and foreign forces to “endanger national security” in the Chinese city.

The accusations concern a crowdfunding campaign – “Fight For Freedom, Stand With Hong Kong” – set up in the summer of 2019 to pay for advertisements in major newspapers around the world seeking support from the international community for the city’s pro-democracy movement.

One typical ad, which ran in The Globe and Mail, urged Canadians to “please stand with us in upholding the heritage of freedom” and called on Ottawa to pass “Magnitsky-style sanctions on those persons responsible for, or complicit in, suppressing Hong Kongers’ human rights and freedoms.” Similar ads ran in The New York Times, Le Monde and other major newspapers.

According to an indictment shared with The Globe, one of the primary accounts used for payments was one belonging to Lais Hotel Properties, which was linked to around $1-million paid to seven newspapers in Canada, the United States, the United Kingdom and Japan.

Lais Hotel Properties was bought by Jimmy Lai’s twin sister, Si Wai Lai, in 1997, and has been controlled by the family ever since. Canadian corporate records list American Mark Simon, Mr. Lai’s top assistant, as one of the directors of Lais Hotels.

Until June, 2020, Royston Chow was also a director. Mr. Chow is one of several executives at Hong Kong’s Next Digital Ltd., the media company founded by Mr. Lai, now facing charges under China’s national security law.

While the Hong Kong case did not directly involve Mr. Lai, it was emblematic of a years-long effort “to construct a grand conspiracy around Jimmy Lai,” said Johnny Patterson, policy director at Hong Kong Watch, a U.K.-based human rights group.

Since Hong Kong was handed over to Chinese rule in 1997, Mr. Lai and his pro-democracy Apple Daily newspaper have been consistent critics of the local administration and the authorities in Beijing, calling for greater democracy and promoting opposition candidates in elections.

Last year, Mr. Lai and several executives at Apple Daily, as well as the paper’s parent company, Next Digital, were all arrested under a draconian national security law imposed on the city by Beijing, and the paper has since been forced to close.

The security law was prompted by the anti-government protests that rocked Hong Kong in 2019, during which Chinese state media repeatedly denounced Mr. Lai as a “traitor,” and alleged he conspired with foreign powers to stoke and direct the increasingly violent unrest.

This Svengali-like image of the 73-year-old tycoon is not in keeping with the facts on the ground. While Apple Daily was a major cheerleader of the protests – even printing signs for people to take to rallies – and Mr. Lai lobbied Western governments to push for greater freedoms in Hong Kong, the influence of older pro-democracy figures on the young, leaderless movement was very limited. At the height of the unrest, even elected opposition lawmakers found themselves ignored by protesters as those lawmakers tried to rein in the violence.

Michael Mo, a former district councillor in Hong Kong now living in exile, said Beijing was “pointing fingers” at Mr. Lai and his associates as a way of supporting its case that unrest in Hong Kong was inspired by and co-ordinated from outside China.

Blaming Mr. Lai, he said in an e-mail, was useful “in terms of making the story ‘legitimate,’ telling both Hong Kongers and mainland Chinese” that the government’s claims are correct.

One of Mr. Lai’s greatest crimes, according to the Chinese and Hong Kong governments, was in pushing for sanctions against officials responsible for the crackdown in the city.

While the newspaper ads funded by Stand With Hong Kong were by no means the sole factor, several governments did respond to the unrest in Hong Kong with sanctions. The U.S. also passed the Hong Kong Human Rights and Democracy Act, which has resulted in penalties against several high-ranking local and Chinese officials.

China’s national security law criminalizes secession, subversion and terrorism, and makes it illegal to “collude” with foreign forces to call for sanctions, with a maximum penalty of life in prison.

In theory, the law is not retroactive, but activities before its passage in July, 2020, can be taken into account by courts. Hong Kong authorities have also taken a wide view as to what constitutes continuing activity, such as having lobbied for sanctions that remain in force.

Stand With Hong Kong, the crowdfunding campaign, describes itself as independent and grassroots. For its 2019 lobbying campaign, it raised some US$1.8-million, about US$813,000 of which was spent on newspaper ads, with the remainder used for legal expenses and “advocacy activities” in several countries, according to an accounting statement published by the group.

But Hong Kong prosecutors say this crowdfunding concealed the true “masterminds and financial supporters” of the campaign: Mr. Lai and Mr. Simon, who sought to get international sanctions passed against the Hong Kong and Chinese governments in order “to force them to accede to their political agenda.”

This accusation was made during the trial of Andy Li and Chan Tsz-wah, two activists who were involved in the lobbying campaign. Mr. Li was one of 12 fugitives detained by the Chinese coast guard last year while attempting to flee to Taiwan by speedboat. He served seven months in a Guangdong prison for illegally crossing the border, before being returned to Hong Kong to face more charges.

Mr. Li and Mr. Chan both pleaded guilty to the charges of colluding with foreign forces to endanger national security, and endorsed the government’s account of the case. The indictment against them, shared with The Globe, reads like a who’s who of critics of the Hong Kong government in the U.K., U.S. and Japan, all engaged in a sweeping conspiracy overseen by Mr. Lai and Mr. Simon.

This included using bank accounts and businesses in Hong Kong, Canada, the U.S. and the British Virgin Islands to pay for the newspaper ads and fund other activities, prosecutors claim.

In an interview with a local newspaper in Niagara-on-the-Lake when Mr. Lai was arrested in 2020, Bob Jackson, chief executive of Lais Hotel Properties, said he typically saw Mr. Lai a couple of times a year, and corresponded with him occasionally by e-mail.

“We’re praying for him here,” Mr. Jackson told the Niagara-on-the-Lake Advance. “With his situation, obviously we support him, but it doesn’t have an impact on our business.”

But while the connection between Mr. Lai and the hotel group is unequivocal, the government’s assertion that Lais Hotels paid for the newspaper ads is much less so. It is unclear on what evidence prosecutors are basing their claims, as they would not have access to Lais Hotels’ banking records, or those of the newspapers that were paid for the ads.

When The Globe sought clarification from prosecutors about Lais Hotels’ alleged involvement, a spokesman for Hong Kong’s Department of Justice said that, as “proceedings remain ongoing, it is not appropriate … to comment on the matter.”

Finn Lau, a founder of Stand With Hong Kong who now lives in exile in the U.K., said he had never heard of the hotel chain before this month.

“I am not aware of it at all,” he said. “Andy Li handled the nitty gritty of bank transfer. In essence, all financial resources came from public crowdfunding.”

In the case of two ads placed in The Globe, records show both were paid for in advance by a “Mr. Li,” and there was no record of payments from Lais Hotel Properties, Mr. Simon or anyone else associated with the company.

Mr. Lau added that if Mr. Lai, a multimillionaire, was a secret backer of the campaign “my teams would not need to rely on crowdfunding at all.”

Because the two defendants in the case pleaded guilty, the government’s assertions about the payments will not be challenged in court. Mr. Li and Mr. Chan will be sentenced next year, following the conclusion of a separate national security case against Mr. Lai.

The allegations may be of potential concern for Lais Hotels however, and people associated with the chain. Hong Kong’s national security law is extraterritorial, and the offences detailed in the law can, in theory, be committed by anyone, regardless of where they are or what country they are a citizen of.

Mr. Patterson, the Hong Kong Watch policy director, said it was “quite possible, given the absurd extraterritorial nature of the National Security Law, that the hotel chain could receive a court summons from Hong Kong,” though he added it was doubtful the authorities would find any way of meaningfully drawing Lais Hotel Properties into the case, given the chain is based wholly in Canada.

“But it will be interesting to watch and see if they try,” he said. 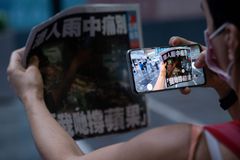 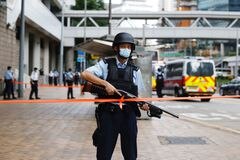