Clare Bronfman once had a life that few can imagine.

She was an accomplished equestrian with Olympic ambitions and a US$132-million trust fund. She lived on a sprawling ranch in Virginia, trained in Europe and came from a line of billionaires dating back to her grandfather, Canadian liquor tycoon Samuel Bronfman, who founded the Seagram whisky empire.

But instead of fulfilling her dreams, Ms. Bronfman is sitting in a New York jail cell serving 81 months for her role in a cult based in Albany, N.Y., called NXIVM. It was led by Keith Raniere, a charismatic fraudster who dubbed himself “Vanguard” and charged thousands of dollars for a self-help program called Rational Inquiry. Prosecutors said his real purpose was grooming dozens of sex slaves who performed “tributes” and had his initials branded on their pelvises.

Mr. Raniere, 60, has been convicted of multiple charges of sex trafficking and forced labour, and he’ll be sentenced later this month. Ms. Bronfman, 41, pleaded guilty to lesser charges involving recruiting workers illegally and identity theft. She has also insisted that she knew nothing about the sexual abuse.

In a letter to District Judge Nicholas Garaufis just before her sentencing last month, Ms. Bronfman tried to explain her actions. “For much of my life I was ashamed of my wealth, I felt it made me different, when all I wanted was to be accepted,” she wrote. “I wish I could turn back the clock or take away the pain, but I can’t.”

Few of NXIVM’s victims believe Ms. Bronfman’s contrition or her claim that she was unaware of the grooming. Many believe she was just as culpable as Mr. Raniere because she has financed NXIVM with more than US$100-million and is even funding his legal defence.

Ms. Bronfman remains a perplexing character in the NXIVM saga; someone who used her vast wealth to enable Mr. Raniere but who also fell victim to his dark spell. Friends and relatives described Ms. Bronfman in court filings as a troubled woman who grew up in a disjointed household hating herself and craving a father figure. When she met Mr. Raniere in 2003, he knew how to manipulate her.

“The one thing that [Mr. Raniere] was skilled at was when he met people he could determine their weaknesses and their fears … and then home in and basically crack them open,” said Rick Ross, a specialist in cult deprogramming who has been hounded by NXIVM’s lawyers for 14 years. “Certainly he recognized all of Clare Bronfman’s vulnerabilities.”

Ms. Bronfman hails from a lesser known branch of the family. Her father, Edgar, took control of Seagram in the 1970s after the death of his father, Samuel. Edgar moved the headquarters from Montreal to New York and expanded the business into oil and chemicals. He married five times and had five children with his first wife; including Edgar Jr. who succeeded his father at the helm of Seagram in 1994.

Edgar’s third wife was Georgiana Havers, the daughter of a British pub owner. They had two daughters; Clare and Sara. Edgar and Georgiana had a tumultuous relationship. They married and divorced twice and Ms. Bronfman and her sister spent most of their childhood on a farm in England where Georgiana grew up. Their father would appear occasionally and whisk them off for a few days to his mansion in New York or his ranch in Virginia.

Family life wasn’t easy and both parents offered little support. In court filings relatives and friends said Mr. Bronfman drank heavily and Ms. Havers paid scant attention to the girls. “I never saw Clare being hugged and cuddled by her parents and their relationship came across as formal and cold,” said Emma Young, a childhood friend.

When Clare announced at the age of 9 that she would no longer eat meat, her mother refused to change her daughter’s diet. Clare persisted and soon rejected all forms of animal products in her food or wardrobe. “Her mother was completely incapable of showing affection, and in fact could be quite cruel,” said Judith Moore, who worked for the family for years. “There was a revolving door of nannies who were often grossly underqualified, too young, intoxicated or otherwise unsuited and often chosen by Clare’s mother on a total whim.”

The sisters were sent to different boarding schools and Ms. Bronfman had trouble fitting in. “As a teenager she never went to the pub, had boyfriends or intimate relationships,” said Paula Kent, a cousin who lived near the farm.

Horses became her only solace and Ms. Bronfman spent most of her spare time riding or in stables. At the age of 16, she moved to Mr. Bronfman’s Virginia ranch to pursue her passion and quit high school in Grade 11 to become a full-time show jumper. She cut a lonely figure on the circuit, always travelling by herself and managing her horses alone. There was a “certain sadness to her person and a certain desire for fatherly guidance and devotion that she unfortunately didn’t receive as much as she needed,” recalled her coach Henk Nooren.

Despite the obstacles, Ms. Bronfman excelled. She won several international competitions and nearly made the U.S. team for the 2004 Olympics. Then she met Mr. Raniere.

Ms. Bronfman was 23-years old at the time and at the peak of her athletic performance. Her sister had enrolled in an NXIVM course and she recommended it to Ms. Bronfman. Mr. Bronfman also took a course and initially sung its praises. He later called the organization a cult, insuring the lifelong wrath of Ms. Bronfman. She pushed her father to make a public retraction right up until his death in 2013.

Ms. Bronfman became enthralled with Mr. Raniere from the start. She bought his boasts that he was the smartest man in the world and that 16,000 people had enrolled in NXIVM’s program. She told the court that she felt part of a family for the first time and that Mr. Raniere had taught her confidence, acceptance and “not to be ashamed of her wealth and to pursue new interests.” She quickly formed a number of close friendships including with actress Allison Mack, an NXIVM insider best known as Chloe Sullivan on the television series Smallville.

Her enthusiasm led her to quit show jumping and buy a farm outside Albany so she could be close to the cult. In 2005 she became an executive board member and began funding Mr. Raniere’s interests. She gave him US$67-million to invest in corn futures, which he lost, and handed over $7-million for a failed technology venture. Another US$26-million was spent on a real estate project and Ms. Bronfman and her sister reportedly paid at least US$1-million to persuade the Dalai Lama to visit Albany in 2009 and meet Mr. Raniere. She even bought an island in Fiji for US$13-million so the leader had a place to relax.

She also served as the cult’s fiercest defender and vigorously attacked anyone who spoke ill of NXIVM or Mr. Raniere. Court filings show that Ms. Bronfman spent at least US$32-million on lawsuits and investigations into ex-members who came out against the cult. She hacked into her father’s e-mail account after Mr. Raniere designated him an enemy of NXIVM and she sent fake legal notices to other critics suggesting they were under criminal investigation.

On one occasion she tried to pressure the Vancouver Police into launching a criminal probe into Canadian actress Sarah Edmondson, a former cult member who helped blow the whistle on NXIVM. The police didn’t pursue the matter but In a statement filed in court, Ms. Edmondson said she will “always look over [her] shoulder – even if [Ms. Bronfman] is behind bars – her money can buy anything and I believe she is vengeful enough to hurt anyone who stands in her way.”

Mr. Raniere kept tight control over NXIVM and prosecutors said he used his Rational Inquiry method to break members' emotional resistance and instill complete trust in him. Participants were constantly told that they weren’t working hard enough on their issues and needed more treatments. They were also told to lure in more members with the promise of getting paid per recruit, which rarely happened. Some members became NXIVM workers, often recruited by Ms. Bronfman. Instead of receiving a salary, they were paid in “credits” for more courses. Anyone who quit was labelled a failure and shunned by the community.

The darker side of NXIVM was called “DOS” or “the Vow.” Female members were handpicked by “masters” to become Mr. Raniere’s sex slaves. Recruits were told DOS offered unique one-on-one mentorship and they had to provide collateral to prove their trustworthiness. The collateral involved handing over compromising confessionals, nude photos, videos or anything that would shame them or their families. The slaves had to be available for Mr. Raniere at any time and were put on a strict diet to stay thin.

Ms. Bronfman has repeatedly denied all knowledge of DOS, but when reports about its activities surfaced in 2017, she characterized it as a “sorority” and said it had “truly benefited the lives of its members.”

There’s little indication that Ms. Bronfman has broken free from Mr. Raniere’s control. In her letter to Justice Garaufis she refused to disavow the cult leader and said he had “greatly changed my life for the better.” She’s also contributed US$13.8-million to a legal defence fund for him and other NXIVM officials.

Mr. Ross said her attachment to the cult may last forever. “Clare Bronfman crossed over to a very dark side and she became Keith Raniere’s chief enabler,” he said. “I would not be surprised if [Ms. Bronfman] never recovers and never comes to grips with what happened. And that she continues to believe that Keith Raniere is some type of saviour.”

Editor’s note: A previous version of this story incorrectly stated that Canadian actress Sarah Edmondson was a former Raniere sex slave. The Globe regrets this error. 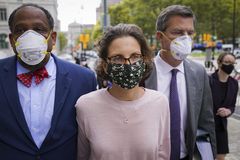 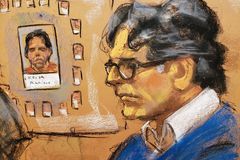