The crowds of black-clad youth that snarled traffic and clashed with police in Hong Kong this weekend came equipped with gas masks, shin guards and shields, but few placards.

The protests showed no sign of abating Sunday with a police officer burned by a Molotov cocktail and protesters bloodied by batons and rubber bullets, with some police firing at head level.

For 10 weeks now, demonstrators have occupied Hong Kong streets to demand government not sacrifice the city’s Western-style freedoms in favour of closer legal and political alignment with authoritarian mainland China.

But for those squaring off against riot police, signs and banners are “not needed. Because when we come here, we know our purpose. It’s a fight,” said Ms. Lee, 22, an airline worker whose face was covered by a mask and who gave only her surname out of fear of retribution.

There is fury at what they call police brutality, but also desperation. “We have already reached a point of no return,” said Davin Wong, a Canadian who is acting president of the Hong Kong University Students’ Union.

In the early days of the protest in mid-June, organizers estimated nearly two million people marched peacefully against a proposed extradition bill. But over the past month, scenes of non-violent demonstration have been overshadowed by images of confrontation between mob-like crowds and police.

Protesters, who have largely left private property untouched, have set fires and tossed Molotov cocktails at police, who have responded with volleys of tear gas and rubber bullets – and hundreds of arrests.

“The strategy here is hit and run,” said Ryan, 21, a university student who declined to provide a surname as he joined a fast-moving flash mob that used the city’s subway to race between neighbourhoods, cutting off highway tunnels and challenging police in residential areas and crowded shopping streets.

Such actions “will increase the cost for the government," Ryan said. "Because by blocking roads, people will be upset. And maybe the message can be transferred to the government.”

But the conflict also stands to imperil what many in Hong Kong see as their most consequential stand against Beijing since it began rule of the city in 1997, a protest with importance not just locally, but in other places where people have sought inspiration in their own struggles with Chinese influence, most notably Taiwan.

Observers question what can be accomplished by the fury pouring onto the streets.

The outbreaks of violence in Hong Kong have provided an opening to local police, who have now arrested more than 600 people, and to mainland China, where state media have warned about foreign plots to conspire against Beijing and inveighed against “radical protesters.” Local gangsters have found space to physically attack demonstrators – with tacit police support, critics charge.

And the conflict has soured some local support, with activists acknowledging that the threat of scuffles and arrests has diminished the chance of arranging a repeat of the mass peaceful demonstrations in June. Hong Kong’s leaders have loudly criticized the violence.

“It seems that the situation has run out of hand,” said Patrick Chung, a retired accountant, who chanced upon a protest Saturday night and stood on an overpass to watch demonstrators briefly shut down a key vehicle tunnel. He could support sit-in actions. “What I am against is the violence,” he said, worried that the future will bring more of the same.

“The situation is just like dynamite. And if you detonate it more frequently, it becomes ever more violent.”

Protesters have made several demands, including full cancellation of the extradition bill (which has been suspended and declared “dead” by Hong Kong leaders), an independent inquiry into police conduct and the granting of greater democratic freedoms. At the core of their movement are peaceful marchers: parents with young children, lawyers, retirees, students and young professionals, thousands of whom chanted slogans in the arrivals area of the Hong Kong International Airport for three continuous days into this weekend.

“The government calls me a thug, the cops call me a cockroach and all I fight for … is just human dignity,” one sign read.

Elsewhere, though, thuggish elements have gained prominence. “Their motivation? Hatred, envy, failure, denial of opportunity, loss of hope, societal isolation. They have no ideology, their aspirations are for conflict,” said Phill Hynes, a Hong Kong-based political risk analyst who has closely tracked recent events. Their actions, he says, are “beginning to undermine the movement.”

At the outset, the most aggressive protesters could claim some success and their actions have won them surprisingly broad support. At a “silver-hair” rally for retirees this weekend, Raymond Wan, 64, pointed to those who surrounded the city’s Legislative Council in mid-June, and the subsequent storming of the council chambers on July 1. Those acts of civil disobedience damaged government property. They also, he believes, helped stop the extradition legislation.

“If we didn’t stop the Legislative Council meeting I think the bill would have passed. And the rest would be history,” said Mr. Wan, a retired international civil servant. ”Protesters have done a lot for Hong Kong, and we really pay tribute to their efforts,” he said.

Others fault police for stoking the violence, and blame local leaders for responding to public demands with officers in riot gear, rather than discussion.

Still, both sides have found reason to use violence as a tool.

”Beijing has used dual tactics, here, polluting the situation through the abuse and manipulation of violence, and large-scale propaganda,” said Wu Qiang, a former Tsinghua University scholar who is an expert in Chinese social movements.

It’s an attempt to “stigmatize” protesters, he said, although a risky one. The more harsh the response, the greater the likelihood of “making mainland China into Hong Kong’s enemy, which is counter to Beijing’s long-term ambitions.”

Protesters, similarly, have attempted to make gains through confrontation. “A constant tactic has been to provoke so as to cause your adversary to overreact and then it is the adversary that looks bad and bears the political costs,” said Kong Tsung-gan, author of As Long as There is Resistance, There is Hope, which examines the struggles of young activists in recent years. Indeed, a harsh response is dangerous for Beijing: “The more the [Communist] Party wins, it loses because you can’t gain consent of occupied (or threatened) peoples by force,” Mr. Kong said.

Beyond the tactical considerations, however, lies a deeply pessimistic protest. Few of those on the streets believe they can achieve any of their aims, and so they are left to provoke.

China under President Xi Jinping has not been noted for an eagerness to compromise. “I myself cannot see any viable resolution, given what I know of how the Communist Party operates,” said Avery Ng, a radical politician currently on bail as he appeals a sentence for disclosing confidential details of a corruption investigation.

”Back in 1989, people had hope. People could see a chance for change,” he said, in reference to the protests in China that Beijing halted with tanks and gunfire at Tiananmen Square. 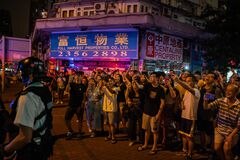 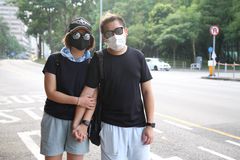