Physicians at Georgina Magana’s public hospital petitioned administrators last month for the periodic testing of health personnel to avoid a possible outbreak of COVID-19. Everyone was tested at her hospital and the doctors and nurses who were positive were sent home.

But as the COVID-19 pandemic dragged on, health personnel started being tested at random since “there were so few tests available,” said Dr. Magana, a neurointensivist in Mexico City. Then priority was put on patients, she said, “but only the really sick ones.” Asymptomatic patients and those with mild symptoms usually went untested.

Mexico has pursued a policy of non-testing since the start of the coronavirus crisis and depended on disease modelling instead. The country ranks the lowest in the Organization for Economic Co-operation and Development and among the worst in Latin America with just 2.7 tests per 1,000 people. (It’s a rate 27 times lower than Canada.)

But even without testing and plans for contact tracing – and after imposing a much looser quarantine than most of Latin America – Mexico has started the process of opening its economy, entering what President Andres Manuel Lopez Obrador calls “the new normalcy.”

The reopening plan landed with a thud this month as all but one of Mexico’s 32 states entered the new phase on maximum alert. Half of the 32 states moved from maximum alert to the lower “high” alert last Monday, but three days later, the country had registered a daily record of 5,662 new COVID-19 cases.

As of Sunday evening, Mexico had recorded more than 180,545 COVID-19 cases and 21,825 deaths – seventh highest in the world – while suspicions of undercounting abound. Researchers reviewing death certificates in Mexico City found 17,310 excess deaths between March 30 and June 7 – 3.2 times the normal number – when compared with the same period of the past four years, according to the magazine Nexos.

Mr. Lopez Obrador – commonly called AMLO – has shrugged off suggestions of undercounting as unethical journalism and wondered aloud why reporters would visit graveyards and crematoriums. He’s voiced a relentlessly optimistic discourse, saying, “We’ve been able to tame the pandemic,” as the death toll raced upward. He encouraged the country to “overcome” fears and head out of the house – taking precautions, he said – because doctors recommend it.

Dr. Magana took issue with the President’s assessment, firing off a terse WhatsApp message – in caps – reading, “NO SANE DOCTOR RECOMMENDS GOING OUT.”

Her message reflected a deep frustration among doctors and nurses, who have protested outside hospitals against the lack of personal protective equipment and must pay out of pocket for antibody tests.

“We’ve been totally abandoned,” said Dr. Magana, who purchased her own PPE after seeing early stories of the virus spreading in China. “There is no strategy here.”

Health experts offer varying opinions on the Mexican COVID-19 strategy, ranging from “containment” to “herd immunity” to “maximizing savings” to trying to time the crisis to minimize economic damage – waiting as long as possible to cancel classes and close businesses.

Hope has seemingly underpinned much of Mexico’s response, along with a steady stream of talk – with up to five hours of daily news conferences from the President, his verbose coronavirus czar and other public officials.

Mr. Lopez Obrador has insisted experts will guide the country’s coronavirus response. He often subordinates science in his COVID-19 discourse, drifting routinely into the realms of religion and morality.

AMLO kept touring the country after coronavirus became a concern, holding rallies and kissing babies. He pulled out a pair of prayer cards at a March news conference, saying the images “protected” him. He later advised that morality would keep people safe. “Don’t lie, don’t steal and don’t cheat,” he said. He recently published a 10-point plan – dubbed “the 10 commandments” by many – for staying safe, which included eating fruits and vegetables, losing weight, staying positive and avoiding consumerism.

“His advice is more the advice you get from your yoga instructor, not what you get from your President in the midst of a crisis,” said Dr. del Rio, former head of the agency responsible for Mexico’s HIV-AIDS response. “It’s not bad advice. [But] he could have said several things that would have been useful – like please wear a mask in public.”

The country’s coronavirus czar, Hugo Lopez-Gatell, has wavered on mask-wearing – which AMLO avoids. He’s also described widespread testing as “a waste of time, effort and resources.”

He’s spoken of Mexico having “flattened” its curve of COVID-19 cases and predicted the peak in cases would occur around May 8, while the death toll would top out around 6,000. Dr. Lopez-Gatell, an epidemiologist trained at Johns Hopkins in Baltimore, has also covered for AMLO’s actions, too, saying, “The President’s force is moral, not a force of contagion.”

Despite the missed predictions, Dr. Lopez-Gatell remains popular and achieved celebrity status with his nightly news conferences, in which he talks calmly and patiently explains technical information. But it’s not been without scrutiny after so many missed predictions – to the point a popular joke goes, “Lopez-Gatell says the peak of the epidemic will be next week and it doesn’t matter which week you hear it because it will always be the same.” He has also been criticized for his unwillingness at times to contradict senior members of the government.

“He has been too much of a spokesperson for the president,” Dr. del Rio said of Mexico’s coronavirus czar. “He’s been too political and he has not spoken truth to power.”

Explainer
Coronavirus tracker: How many COVID-19 cases are there in Canada and worldwide? The latest maps and charts
April 18, 2021

Analysis
In the U.S., coronavirus is a failure decades in the making. Is there time to do better?
June 10, 2020 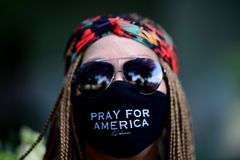 People with HIV, TB have twice the risk of death from coronavirus, report finds
June 9, 2020