In South Africa, it has become a kind of collective national secret – many people know exactly where the rhinos are located, but they are careful to keep it quiet.

On the sightings boards at Kruger Park, where visitors map their lion and elephant sightings, the rhinos are never shown. On the two-way radios in safari vehicles, guides often avoid any mention of rhinos, in case the poachers are listening. On wildlife reserves’ social media pages, photos of rhinos are discouraged, since they might reveal geolocation data.

The communal effort to thwart the poachers is part of a massive national and international campaign, born more than a decade ago, when poaching was skyrocketing and the extinction of the rhino was a looming danger. And in an extraordinary success story, there are signs today that the campaign is starting to work – with many lessons for the rest of the world to learn.

For years, the annual number of rhinos killed by poachers in South Africa had been soaring to alarming heights, fuelled by demand for rhino horn in the booming economies of Vietnam and China, where rhino horn is sold for up to US$65,000 a kilogram, even though it is medically useless.

By 2014, the annual number of rhinos killed by poachers in South Africa had surged to 1,215, compared with just 13 rhinos in 2007. Annual deaths topped the 1,000 mark for five consecutive years. Global headlines warned that the rhinos could be wiped out.

“The increase in poaching was dramatic, and the response from the general public was quite remarkable,” said Jo Shaw, senior manager of the wildlife program at the South African branch of WWF, the World Wide Fund for Nature.

But over the past six years, South Africa has sharply reduced the level of rhino poaching. By last year, the number of rhinos killed had declined to less than 600. And in the first half of this year, only 166 rhinos were killed.

Poaching has also been reduced in several other key countries, including Namibia, Zimbabwe and Kenya.

The threat posed by poaching is still formidable, but experts are encouraged.

“We don’t seem to be dealing with an intractable problem, which is heartening,” Dr. Shaw said.

South Africa is the main battleground for the struggle against poaching, since it is home to about 80 per cent of the world’s rhinos. Conservation efforts here since the 1960s have allowed rhinos to be relocated to other African countries, diversifying their numbers, but South Africa remains their main territory.

The Globe and Mail talked to conservation experts, rhino advocates and national park officials to find out how the battle against poaching has begun to turn – and what specific techniques have proven most effective.

The answers are complex. Progress has been made on the demand side by reducing Asian demand for rhino horn, and on the enforcement side by detecting and arresting poachers before they can strike. Dozens of methods have been tried, and several have proved effective, offering hope for other campaigns to save the world’s most endangered animals.

On the demand side, conservation groups have been focusing on Vietnam, the biggest market for illicit rhino horn, where a burgeoning consumer class had increasingly seen rhino horn as a status symbol and a cure-all for ailments of all kinds – even cancer, according to an influential politician whose false claims helped to fuel the demand. Conservation groups began with consumer surveys, to study the motivations of Vietnamese buyers and the messages that could influence them. Then they launched campaigns that focused on sectors such as traditional medicine and the business community.

Rhino horn in Vietnam is gradually beginning to lose its status as a prestigious luxury product. “I’m sure this process has been speeded up by efforts from NGOs and the Vietnamese authorities to change consumer behaviour,” said Richard Thomas, head of communications for TRAFFIC, an independent British-based organization that focuses on the global trade in animals. “I think there are reasons to believe current poaching levels are beginning to decline as a result of reduced demand from Vietnam,” he said.

One of the most effective campaigns has focused on business leaders, using the traditional Vietnamese concept of chí (“will”) to send the message that success and good fortune are a result of an individual’s internal strength and character, rather than an external talisman such as rhino horn. Cathy Dean, chief executive officer of Save the Rhino International, a British-based group, said there seems to be greater awareness in Vietnam and China that rhino horn is illegal, and more disapproval from younger people. “As far as we can tell, there’s a generational shift,” she said.

On the law-enforcement side of the equation, new canine tracking units have been among the most valuable tools in fighting rhino poachers. “They have contributed to almost 96 per cent of all arrests inside Kruger National Park,” said Isaac Phaahla, spokesman for the park, one of the biggest in the world.

The tracking dogs are supplemented by four helicopters, whose pilots are trained for nighttime flights, along with a sophisticated ground-based surveillance system known as “Postcode Meerkat,” including radar, night-vision cameras and sensors. The system helped reduce poaching by 80 per cent after it was introduced in late 2016. “It has taken the night away from poachers,” Mr. Phaahla told The Globe.

In private wildlife reserves near Kruger Park, packs of free-running black-and-tan hounds have been imported from Texas, where they had traditionally been used to search for prison escapees. The hounds have reportedly increased the poacher arrest rate from 5 per cent to more than 50 per cent. “Dogs are pretty awesome – you can’t bribe a dog,” Ms. Dean said. “The K9 units have made an incredible difference.”

She also cited the greater use of cellphone technology to monitor the movements of anti-poaching rangers to ensure that there aren’t any gaps in their coverage. Not all technology, however, has proven so useful. There were early hopes for drones to patrol the skies above wildlife parks, but Ms. Dean said the drones have limitations – including their short range and vulnerability to windy conditions – that have restricted their value.

Instead, some of the best investments have been in humans: police intelligence work to detect poaching gangs before they can strike; efforts to provide better gear and accommodation for anti-poaching rangers; livelihood programs to help communities around wildlife parks so that they are less likely to help poachers; and training sessions for judges and magistrates so that they understand the links between poaching and transnational organized crime.

One of the most effective responses has simply been to cut off the horns of the rhinos, so that poachers will be less interested in them. Some parks and private owners have completely dehorned their rhinos.

All of this has come at a cost. For the rangers, the constant nighttime patrols are exhausting. “The human toll has been immense,” Dr. Shaw said. “The successes are real, but they have been hard-won.”

Reliable surveys of rhinos have not been conducted in South Africa for years, but wildlife experts say the number of white rhinos – the main targets of poachers because of their bigger horns and more open habitat – may have declined from about 20,000 to as few as 15,000 in recent years, because of poaching and drought. (The official estimate from the International Union for Conservation of Nature is 18,000.)

But some of this decline has been counterbalanced by a rise in the number of black rhinos – the leaf-munching cousins of the grass-grazing white rhinos.

Partly as a result of translocation projects that found new homes for them in African countries, the black rhino population has more than doubled since the 1990s, from fewer than 2,500 to an estimated 5,600 today. “Nearly two decades of hard work on behalf of black rhinos is paying off,” the WWF declared this year. 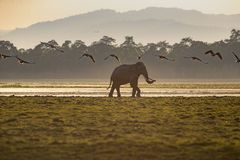 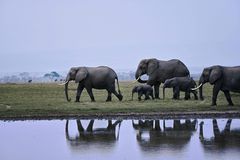 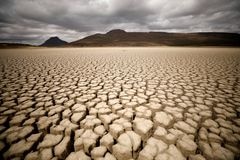