When Daphne Caruana Galizia was assassinated in her car in October, 2017, her three sons and three sisters did not retreat in grief, shielding themselves from friends and media. Instead, they went on the offensive.

The family of the Maltese journalist, who had uncovered rampant government corruption in the southern European country, enlisted the help of then-opposition leader Simon Busuttil and emboldened local human rights and democracy groups.

From the day of Ms. Caruana Galizia’s death, the family’s target was always Prime Minister Joseph Muscat, a few of his senior cabinet ministers and their wealthy business contacts in notoriously corrupt Malta, where money laundering, the sale of passports, lax banking controls and dubious government contracts are rife. From the onset, they were convinced that dark forces at the upper levels of government and business were behind the assassination.

And after a tense, emotionally charged week of protests demanding Mr. Muscat’s ouster and rocking the Mediterranean island state, the family’s efforts have, in part, paid off.

On Sunday, Mr. Muscat announced on national television that he would step down in January, after a new Labour Party leader is selected. The previous day, one of Malta’s wealthiest businessmen, Yorgen Fenech, 38, was formally charged with complicity in the murder of the journalist, after trying to flee the country on his yacht last month. He pleaded not guilty.

“It was a relief to see him being taken off to jail in handcuffs,” Matthew, Ms. Caruana Galizia’s son, told The Globe and Mail.

The weekend’s events follow the resignations of two cabinet ministers, Konrad Mizzi and Chris Cardona, last week. Ms. Caruana Galizia had revealed that both of them were beneficiaries of secret Panamanian accounts that may have received illicit kickback payments. Both deny links to the murder.

“The last two years have felt like one long day,” Corinne Vella, who acts as the spokesperson for the family and its campaign for justice, said in an interview. “At first, there was a lot of attention on us and no attention on political responsibility. Our family pushed the political agenda.”

Ms. Vella, 54, is one of Ms. Coruana Galizia’s sisters, and edits Taste & Flair, a lifestyle magazine that was published by Ms. Caruana Galizia. She is the aunt of the journalist’s sons: Matthew, an investigative reporter and software engineer; Andrew, a diplomat; and Paul, finance editor at tortoisemedia.com, a British journalism site.

Matthew, who was a member of the team from the International Consortium of Investigative Journalists that won a Pulitzer Prize for its work on the Panama Papers leak (and which would prove a treasure trove for Ms. Caruana Galizia), immediately led the charge by pointing the finger at the top levels of government.

In a Facebook note posted the day after the murder, he wrote: “This was no ordinary murder. … We are at war against the state and organized crime, which have become indistinguishable.” He named Mr. Muscat, Mr. Schembri, Mr. Cardona and Mr. Mizzi as “complicit” in his mother’s death.

“Matthew is very much his mother’s son,” said the authors of the newly published book on the investigation, Murder on the Malta Express, by Carlo Bonini, Manuel Delia and John Sweeney.

One week later, to keep the pressure up, the sons gave a media briefing at the EU Parliament in Strasbourg, where the assembly members bowed their heads in a minute of silence out respect for the slain journalist. Matthew has been relentless in keeping the EU institutions focused on the case.

Earlier this year, Matthew addressed the EU Parliament’s financial crimes committee, detailed the apparent frauds and corruption cases his mother had exposed. This week, the EU Parliament is sending a mission to Malta to try to ensure that justice is not impeded as the journalist’s family and local activist groups blast the government with accusations of conflicts of interest, foot-dragging and cover-up.

The sons’ campaigning gave rise to human rights and democracy groups such as Repubblika, which took the government to court to fight the Prime Minister’s “arbitrary decision” to make judicial appointments, arguing the system breached EU law. They have attended almost all of the mass, anti-government protests in Valletta, the capital.

On Saturday night, the family sat directly behind Mr. Fenech as he was charged with complicity in their mother’s murder, more than two years after her death.

In an attempt to receive a presidential pardon – he failed – Mr. Fenech claimed that Keith Schembri, Mr. Muscat’s chief of staff and close friend, was behind the murder and had arranged the €150,000 ($219,500) payment to the hitmen. (Two months after the murder, three Maltese men were charged with planting the car bomb; they await trial).

Last week, Mr. Schembri was arrested and detained by police for questioning in connection to the murder. Mr. Schembri was released without charge. He denies links to the journalist’s death.

Mr. Busuttil, meanwhile, has been following the case from the start. He knew that Ms. Caruana Galizia had made many enemies. Years before the car bomb, unknown assailants had made two attempts to burn down her house.

Mr. Busuttil lost the 2017 general election to Mr. Muscat and is no longer the leader of the opposition, although he is still a Nationalist Party lawmaker and still using Ms. Caruana Galizia’s journalistic findings and those of her sons’ to try to embarrass the government and speed the removal of Mr. Muscat.

“Our country cannot repay our debt to her sons, given the huge obstacles that were put in their way,” he said. “The three sons were the picture of dignity in the face of injustice.”

Maltese millionaire charged with complicity in assassination of journalist
December 1, 2019 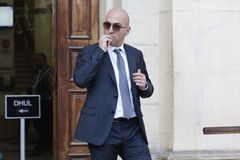