Under attack for the security of his company’s products and the ethics of his employees, the chairman of Huawei Technologies Co. Ltd. is ceding no ground to critics, rejecting all allegations of wrongdoing by the company, warning about the dangers of decision-making on “ideological” grounds and painting the world’s largest maker of telecommunications equipment as an innocent contributor to the global good – one determined to continue its research partnerships with Canadian universities.

Huawei has been depicted by Western intelligence chiefs as a Chinese government-controlled threat to information security and described as devious by U.S. prosecutors. In numerous global capitals – Ottawa included – leaders are debating whether to block the company’s 5G cellular technology for fear it could be used in espionage. In the United States, meanwhile, indictments unsealed this week portray a deceptive corporation that formalized an employee bonus system for the theft of competitors’ secrets while lying to its own bankers about its business in Iran, where it is accused of violating sanctions.

But on Friday, Huawei chairman Liang Hua said the company has nothing to apologize for, waving off accusations that it has stolen trade secrets and, in Canada, seized government-backed university research. He urged anyone worried about Huawei to limit discussion to technical matters rather than “staying at a political level.”

Huawei invited The Globe and Mail to its headquarters in Shenzhen, offering a reporter a tour that only two months ago would have been impossible to arrange. The Globe was given a brief look at a largely robotic assembly line producing the P20, a flagship smartphone released last March, as well as glimpses of the company’s “Noah’s Ark” artificial intelligence lab, research divisions devoted to materials science and materials management and an introduction to the company’s internal cybersecurity testing operation.

Huawei also made Mr. Liang available for an hour-long interview in which he cautioned about the risks of the politically motivated security concerns cleaving the world. Observers have warned that the U.S.-led backlash against Huawei stands to produce a kind of technological deglobalization, fomenting divides between countries that use Chinese-made goods and those reliant on Western products.

Moving to a future of “technological divisions based on different ideologies or viewpoints,” Mr. Liang said, “would not be beneficial for humanity, nor for technological progress.”

His warnings come as the company finds itself in the middle of a global reassessment of China and rising fears over the ways Beijing can use Chinese companies as agents of foreign influence. Huawei is in the early stages of installing the architecture for the next generation of mobile technology, the 5G networks that stand to carry much of the world’s data in the coming years.

But before it can do that, officials in a growing list of places – among them Germany, the European Union, Canada and other countries – are considering blocking the Chinese company’s technology, after Western intelligence chiefs called it a cybersecurity vulnerability. Three of Canada’s Five Eyes intelligence allies – the United States, Australia and New Zealand – have already done so, and the United Kingdom has put restrictions on Huawei technology.

The arrest of Huawei chief financial officer Meng Wanzhou in Vancouver last year has brought the company’s trustworthiness further into question, with the U.S. requesting her extradition and accusing her of bank fraud related to violations of sanctions against Iran. Earlier this week, the U.S. Justice Department unveiled 23 charges against the company and Ms. Meng. Among them are detailed allegations that Huawei employees stole trade secrets when they sought measurements, photographs and other information about a T-Mobile testing robot dubbed Tappy. In 2017, a jury in a civil case with T-Mobile found that Huawei had misappropriated trade secrets related to Tappy.

Mr. Liang told The Globe he was “not clear” about that jury finding. The jury did not find “wilful and malicious conduct” by Huawei, he said. He recited verbatim – twice – a statement saying the company “denies that Huawei or its subsidiaries or affiliates have committed any of the asserted violations of U.S. law set forth in each of the indictments.”

Asked how Huawei can convince skeptics that it can be trusted, he cited the company’s portfolio of 80,000 patents – 10,000 of them under licence in the U.S. – and the US$15-billion it spent on research and development last year as evidence of its respect for intellectual property. “I believe Huawei is a contributor in the digital and intelligent world,” he said.

Mr. Liang is filling in for Ms. Meng as chief financial officer but declined to comment on her situation. “If it is related to the group financial strategy issues, it’s possible that some colleagues would communicate with her,” he said. “But the bottom line is, all of these communications are compliant with laws and regulations."

It was a recurrent theme. He cast the company as a virtuous firm whose policies prohibit employee wrongdoing and whose technological advances have been for the common good.

Take Huawei’s research partnerships with more than 10 universities in Canada – the results and intellectual property from those arrangements “belong to the professors,” Mr. Liang said. Their research has “not just illuminated Huawei, but also illuminated humanity. This means that other people can benefit from and use those results.”

His statement, however, conflicts with 40 U.S. patent filings found by The Globe last year in which Canadian scholars working with the support of public funds have assigned all intellectual property rights to Huawei. The company has also secured exclusive rights to some of that university research by licensing intellectual property.

The Canadian Security Intelligence Service has warned Canadian universities to exercise caution when partnering with Huawei.

The Chinese firm, however, has dramatically increased its research work in Canada, spending US$137-million in 2018, a 28-per-cent increase over 2017. It is also bulking up its 1,140-person Canadian operations with 181 job postings, including for people with expertise in artificial intelligence, machine learning, computer vision and data mining.

Those are “exactly the fields where Canada has a lot of talent,” Mr. Liang said.

He gave no indication that Huawei would end such work if Canada blocks the deployment of its 5G technology or that it would alter course on its work with universities. “We will continue to enhance our partnerships in R&D with Canadian universities,” he said.

The company’s 4G equipment already forms a major part of Bell and Telus cellular networks. Huawei entered the Canadian market in part by creating a new kind of base station, capable of handling 10 bands at once, and Mr. Liang pitched the company’s new technology as “the most efficient 5G.” He confirmed that Huawei is “in the process of communication” with Bell and Telus. “It all comes down to the needs of the customers,” he said.

He denied that Huawei has any obligation to help Beijing “install backdoors in devices or networks in order to collect information for the intelligence organization.”

Chinese law requires companies to assist with intelligence work and obligates telecommunications operators to hand over decryption tools to national security authorities. Those laws have raised concerns that a Chinese government with an increasingly assertive foreign policy could demand that Huawei use its equipment to spy far beyond Chinese borders. FBI director Christopher Wray warned this week that “China writ large is the most significant counter-intelligence threat we face.”

Mr. Liang returned fire with a Chinese legal opinion that said equipment makers such as Huawei are not obligated to provide decryption tools, while the country’s law requires its intelligence apparatus to “respect and safeguard human rights.”

Critics accuse China’s secret police of acting with impunity to stamp out dissent.

Mr. Liang said Huawei would "never do anything to harm any country, any organization or any individual.”

It’s not fair, he said, to target a single company. “We cannot simply say that one specific 5G product vendor is secure while the other is insecure,” he said on the company’s sprawling campus, where researchers emphasized Huawei’s openness and technological sophistication.

“Right now, we welcome everyone to come in. We don’t want Huawei to feel like a mystery,” said Yang Jianbo, with the company’s technical planning department.

Inside its corporate laboratories, chief scientists described Huawei’s efforts to build 5G technology, which represents a leap forward – not just in terms of exponentially faster wireless access, but also new magnesium alloys to reduce weight for base stations; new liquid-cooled heat sinks to protect sensitive technology; new coatings to prevent ice from disrupting signals; and artificial intelligence to manage networks of cellphone towers, powering down unneeded capacity and then predicting, four times every hour, when more capacity is needed.

“We may be the largest team in the world, and we believe we are the best team,” said Hong Yuping, the chief thermal engineer.

At the company’s Independent Cybersecurity Laboratory, 137 people test every product in Huawei’s vast catalogue. One of its mottoes: “Assume nothing, believe no one, check everything.”

Lab director Martin Wang described how his unit reports to John Suffolk, the company’s global cybersecurity and privacy officer, who has the power to veto product releases – a power he exercised 15 times in 2017 and three times in 2018. The smaller number, Mr. Wang said, is a sign of improving product designs. “The less the veto power is used, the better it means we are doing.”

The lab verifies the cybersecurity of Huawei products. But Mr. Wang said it eschews people with intelligence or military backgrounds; such job applicants are weeded out in the initial screening process and “will never be hired,” he said.

“We don’t want to get involved in any unnecessary controversy.” 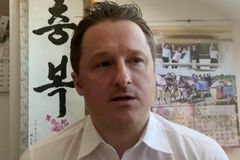 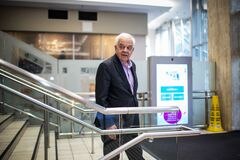