Thousands demonstrated in Algeria on Tuesday, demanding immediate political changes a day after ailing President Abdelaziz Bouteflika abandoned his bid for a fifth term in power but stopped short of stepping down.

Huge crowds gathered in several cities and Ennahar TV reported workers began a strike that paralyzed operations at the Mediterranean port at Bejaia. But in the capital, aside from a few hundred protesters, life carried on normally.

Bouteflika, 82, bowed to weeks of mass demonstrations against his 20-year-long rule on Monday and promised a transition to a new leadership. But he postponed an election set for April, meaning he will likely remain in power for some time.

Veteran diplomat Lakhdar Brahimi and protest groups are expected to join a conference planning Algeria’s future that Bouteflika said should try to finish its work by the end of 2019, government and political sources told Reuters.

Brahimi, a former Algerian foreign minister and U.N. special envoy who is in his 80s, is expected to chair the conference that will oversee the transition, draft a new constitution and set the date for elections, a government source said.

While Brahimi is widely respected, he and other people of his generation may not fit the profile of figures who can deliver an energetic Algeria full of fresh ideas.

Crowds who came back onto the streets on Tuesday demanded quicker action, reflecting suspicions that the old guard, adept at manipulating opposition groups, might be seeking to weaken and divide the protest movement.

“The whole system must disappear immediately. Our battle will continue,” 25-year-old student Noureddine Habi said in central Algiers as others chanted: “We want this system to go”.

Algerians have become disenchanted with Bouteflika and other veterans of the 1954-62 war of independence against France who have dominated a country with high unemployment, poor services and rampant corruption despite its oil and gas.

“The government has often encouraged the radicalization of popular protests in the past as a ploy to divide and rule, and it knows all the moves,” wrote North Africa expert Hugh Roberts.

More than a quarter of Algerians under 30 are unemployed.

“We do not need Bouteflika to decide on behalf of the people,” said Ahmed Beddine, a 50-year-old grocer.

“A competent government will be established, with the confidence of the participants in the national conference, which will supervise the presidential process,” said Ramtan Lamamra.

Contacts are now under way with war veterans who may take part in the transition, including Djamila Bouhired and Zohra Drif Bitat, two of the most famous guerrilla fighters of the conflict, political sources said.

Seen by Algerians as revolutionary heroines, they were part a network of women who carried explosives in a bombing campaign in 1956 that included an attack on the fashionable Milk Bar cafe depicted in the film The Battle of Algiers.

Their revolutionary credentials may not be enough to impress restless young Algerians, who are desperate for opportunities and criticize their elderly leaders for dwelling on the past.

“I think it’s a sign of maturity. We will do everything to accompany Algeria in this transition with friendship and respect.”

The United States said it backed the talks going on in Algeria and that it was “closely monitoring” reports elections had been postponed.

“We support efforts in Algeria to chart a new path forward based on dialogue that reflects the will of all Algerians and their aspirations for a peaceful and prosperous future,” State Department spokesman Robert Palladino told a briefing.

Algeria’s powerful military is expected to play its traditional behind-the-scenes role during the transition and is currently considering several civilians as candidates for the presidency and other top positions, political sources said.

One of them is prominent lawyer and human rights activist Mustafa Bouchachi, who has won a wide Facebook following during the demonstrations.

Bouchachi was elected to parliament in 2012 as a member of Algeria’s oldest opposition party but resigned less than two years later because he said his efforts to promote reforms in the government were ignored.

At the height of the protests, he told young people at a university that Algeria needed an entirely new political system, El Watan newspaper reported.

“We need a consensual transition period which will be led by credible people,” he said.

Many Algerians agree. But some remain doubtful.

“Those who have been talking of leaders (from the demonstrations) want to bring you down,” activist Fodel Boumala told protesters in Algiers.

“There is no leader for now. The real leadership is the people. The top priority right now is to strengthen our protest movement.” 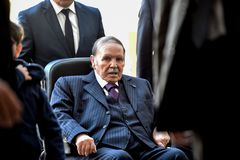