The buzz starts near the back of the crowd and ripples through the ranks of nearly 100 Democratic Party faithful. They swivel in unison to gawk at a smiling woman who has just slipped into this activity room at a suburban public library. The object of their ardour is Mikie Sherrill, Democratic candidate in New Jersey’s 11th congressional district, and the personification of the party’s new emphasis on women and veterans.

As she makes her way to the front of the room, shaking hands and hugging people, excited murmurs fill the air. In this leafy, affluent, deeply Republican area, Ms. Sherrill is the most disruptive force to hit the local political scene in decades.

The suburban mother of four and former U.S. Navy helicopter pilot is on track to defy history and win the 11th district on Nov. 6, forming part of a Democratic counterblast to U.S. President Donald Trump in the midterm elections. Her victory would be noteworthy in itself, but also for its wider implications: Democrats need to win only 23 districts now held by Republicans to seize control of the 435-seat House of Representatives.

Democratic control of the House would break the Republican grip on both chambers of Congress. It could corral Mr. Trump’s America First policy on trade and limit the White House’s attempts to dismember Obamacare. It might also put more oversight on the President himself. It could, in short, spell the beginning of the end for Trumpism.

But all of that hinges on what transpires in key districts like New Jersey’s 11th, which voted narrowly for Mr. Trump in 2016. For the past three decades, this swath of suburban commuter towns an hour outside of Manhattan has elected a Republican congressman to office, usually by margins of 19 per cent or more.

Ms. Sherrill is the rare candidate with the charisma and credentials to bust that Republican dominance. The 46-year-old is a graduate of the U.S. Naval Academy, Georgetown law school and the London School of Economics. She’s flown Navy helicopters and served as a federal prosecutor. “And, on top of that, she can give a good speech,” says Ben Dworkin, director of the Institute for Public Policy and Citizenship at Rowan University in Glassboro, N.J. “When people meet her, they like her.”

Her opponent is no lightweight, though. Jay Webber, also 46, is a graduate of Harvard law school, a six-time assemblyman in the state legislature and a former chair of the state Republican party. A father of seven, he is a social conservative and supporter of Mr. Trump. Perhaps most important, he is waging political battle in a district his party has always regarded as its own.

“Political people in New Jersey joke that the 11th district in New Jersey is constitutionally Republican,” says Mr. Dworkin, a long-time observer of the state’s politics. “It’s been Republican forever and should, in any normal year, be the safest of safe Republican districts. But 2018 is not a normal year.”

What makes 2018 so unusual is Mr. Trump, an exceptionally divisive President who has alienated many traditional Republicans, especially women. As a result, Democrats are proving to be competitive in regions, from Georgia to South Dakota to New Jersey’s 11th district, where they have not been a force for years.

Despite that broadening appeal, polls don’t give them much chance of winning back the Senate. However, the pollsters say Democrats are in excellent position to take control of the House of Representatives. The non-partisan Cook Political Report puts them on pace to gain between 25 and 35 seats, comfortably above the 23 needed for a majority.

Of course, as the world learned in the 2016 presidential election, pollsters can be wrong. The President still commands fierce loyalty among roughly 4 in 10 voters nationwide, essentially unchanged since election day.

His enduring appeal has led to the great oddity of the 2018 midterms: In an election that in many ways is all about Mr. Trump, many candidates of both parties treat him as He-Who-Must-Not-Be-Named.

Ms. Sherrill, for instance, never utters the T-word in her 15-minute appearance before voters at the Florham Park library. Instead, she offers a shout-out to recently deceased Republican senator John McCain and cites him as an example of someone who put country ahead of personal interests.

The reason she is running, she tells her audience, is because she fears the growing tendency of many elected officials to stick slavishly to a party line. It reminds her of a lesson she learned at the Naval Academy: The necessity of speaking up. The worst thing you can do in the Navy is to run your ship aground, Ms. Sherrill says, but when investigators probe such accidents, they discover many of the calamities occur despite crew members being well aware of the impending disaster. Junior officers and ordinary sailors remain silent, even as catastrophe looms.

“Sometimes it’s because they’re afraid of the captain … sometimes it’s because they don’t think it’s their job,” she says. The same is true in politics, she notes: “What we have in Congress now are too many people who are putting their self-interest ahead of the country” instead of focusing on issues, such as affordable health care, infrastructure spending and tax reform that could help middle-class families.

Her pitch is bipartisan, middle of the road and crafted to fit a district where most polls show her leading the race, but not by much. A Monmouth University poll, published in early October, puts her ahead 48 per cent to 44 per cent, within the survey’s margin of error.

Mr. Webber’s campaign has counterattacked by accusing Ms. Sherrill of being a hypocrite and “hard-left culture warrior.” In a mid-afternoon rally in a suburban Marriott hotel with retiring House Speaker Paul Ryan, Mr. Webber trumpets the red-hot U.S. economy and tells his audience of about 160 cheering Republican loyalists that “America is winning everyday ” under the current administration. But he too avoids mentioning Mr. Trump by name.

When pressed on the issue in a press scrum, Mr. Webber declares himself to be perfectly in tune with the President. He says he would welcome a presidential visit to the district. “He’s the leader of the free world. I’d love him to come.”

Perhaps so, but New Jersey voters have particular reason to dislike the President. His tax reform package last year limited the ability of people in highly taxed states like New Jersey to deduct state and local levies against federal obligations. Washington has also been reluctant to get behind a badly needed project to build a new rail tunnel from New Jersey to Manhattan.

One result has been a massive flow of dollars to Ms. Sherrill’s campaign. Based on figures to the end of September, she has raised US$7-million to Mr. Webber’s US$1.2-million, according to the website OpenSecrets.org. The edge in fundraising could prove decisive on election day, when the real opponent for both parties will be Team Apathy.

Mr. Dworkin, the maven of New Jersey politics, notes that only 42 to 46 per cent of registered voters in the state turn out in a typical midterm election. “If you get a surge, and a lot of those are Democratic voters, that could change everything, because these are races in traditionally Republican districts that are going to be close.”

Donald Trump won it by

less than one percentage 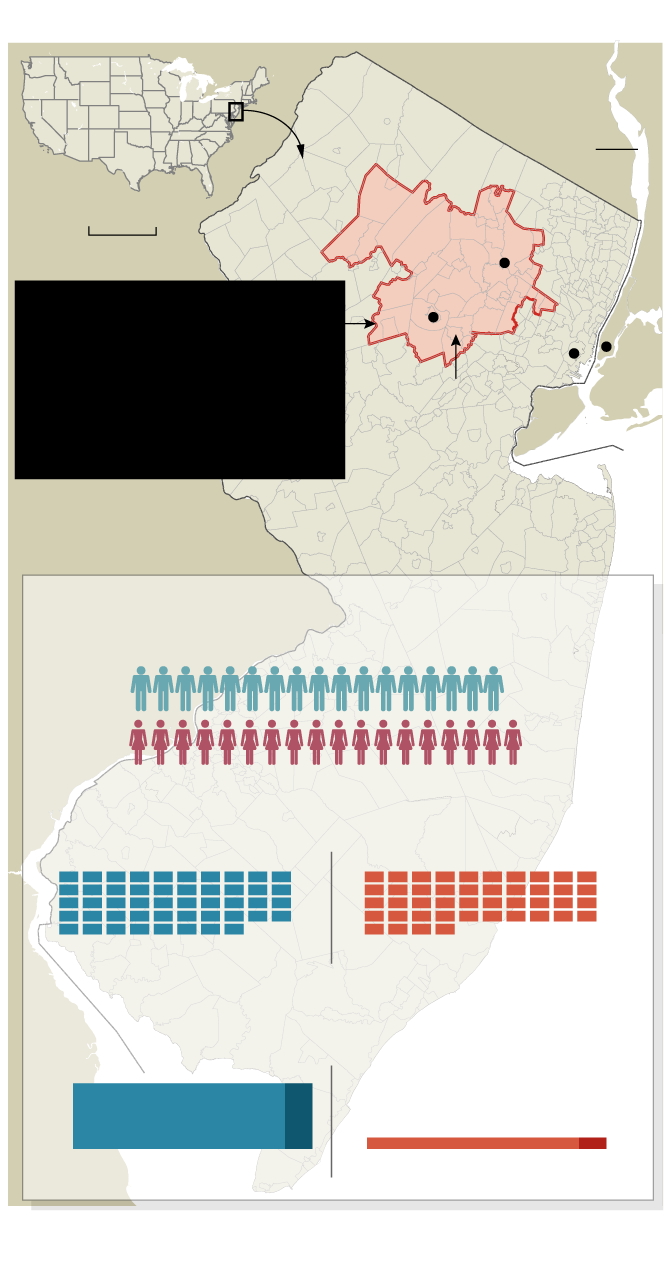 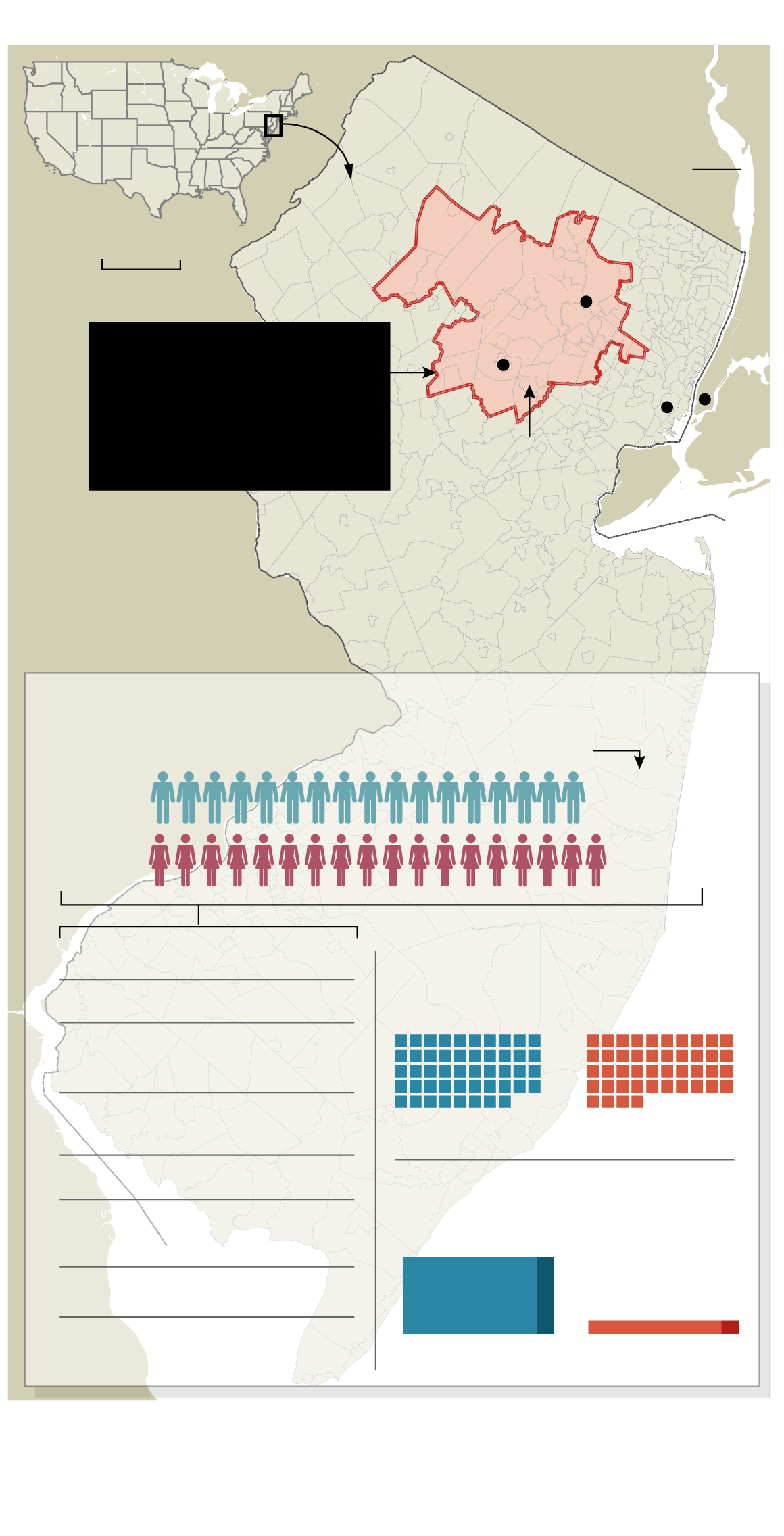 *According to the U.S. Census Bureau, “white” includes anyone, “having origins in any of the

original peoples of Europe, the Middle East or North Africa.” Hispanic is not defined as a race using

this definition. There are 83,359 “Hispanic or Latino (of any race)” counted among these figures.

Rashida Tlaib, a trailblazing Muslim woman, is the new face of the civil rights movement in Detroit
October 26, 2018
2018 U.S. midterm election: What could happen, what’s at stake and why do they matter? A guide
October 15, 2018
In D.C. suburbs, Republicans elevate Trump-like candidates despite diminishing chance of winning
October 25, 2018